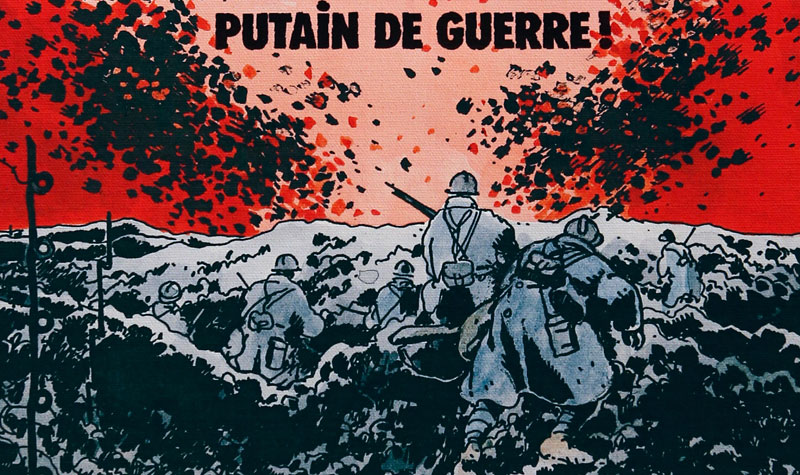 In his mid-twenties, Kan Chhum left his home in Phnom Penh for war. His destination: the far, fatal Western Front in Europe.

Serving for France during World War I as a member of the 7th Batallion of Indochinese Infantry, Kan Chhum departed by ship–through Madagascar and rounding Africa–arriving in the coastal French town of Marseille in October 1916.

Seven months later, he died during the failed offensive at Chemin des Dames in northern France, on May 6, 1917.

Kan Chhum’s story, along with another Cambodian soldier in the same battalion, Chhim En, are commemorated as part of the exhibition “F—ing War: Tardi, Verney and the Great War,” which opens today at the Institut Francais in Phnom Penh.

Though a conflict between Western nations, the war that lasted from 1914 to 1918 was truly a “world war,” drawing soldiers from European colonies and protectorates across the globe. The French Embassy estimates that about 20,000 Cambodians participated in the war.

A celebrated graphic novelist born to a military family in 1946, Mr. Tardi has produced several works on World War I. His 15 panels at the exhibition depict the gruesome reality of warfare.

“The war described by Tardi and Verney is war of the trenches lived by unranked soldiers on the French side as well as the German side,” Institut Francais cultural attache Cecile Peyronnet said by email.

In 1915, France shifted strategy to attrition warfare, using static positions to wear down the enemy’s offensive. Trenches stretching from the English Channel to Switzerland provided cover for the snipers.

In the trenches, soldiers succumbed to diseases and infected wounds. Others, like Kan Chhum, died in combat.

In Phnom Penh, Mr. Tardi’s images are joined by two additional panels, created by students of the Lycee Francais Rene Descartes school in Phnom Penh: one on Kan Chhum and Chhim En, and one on the monument commemorating Cambodian soldiers in World War I, which was destroyed during the Khmer Rouge regime.

Narrated in French–with Khmer and English translations–the Cambodian soldiers’ plight, along with those in Mr. Tardi’s somber illustrations, serve as a reminder, a century after the war began, of its human toll.

The exhibition opens tonight at 6:30 p.m. and runs through July 11.