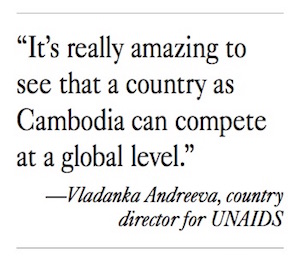 Cambodia has made significant progress in HIV treatment, taking the lead regionally by reaching 80 percent of those living with the virus and becoming one of only seven countries globally to reach target treatment goals, according to a U.N. report released on Thursday.

For a country that 20 years ago was battling one of the most rapidly growing AIDS epidemics in Southeast Asia, the progress is “a huge achievement,” the U.N. said in a news release.

The virus had to be suppressed in at least 73 percent of people living with HIV—greatly reducing the risk of transmitting the virus to others—by the start of the year in order to have met the goal, with Botswana, Denmark, Iceland, Singapore, Sweden and the U.K. joining Cambodia in the feat, the U.N. report says.

“It’s amazing what we’ve achieved,” Vladanka Andreeva, country director for UNAIDS, said on Thursday. “It’s really amazing to see that a country as Cambodia can compete at a global level.”

“We’re in a pretty good place, however we have to sustain that. I think that the biggest threat, if you will, to the sustainability is looking at the financial aspect,” she said.

Between 2018 and 2020, there is an anticipated $4.7 million funding gap, which she said relevant bodies are lobbying the Finance Ministry to provide from the national budget. Ministry spokesman Ros Phearun declined to comment. But Dr. Ly Penh Sun, director of the National Center for HIV/AIDS, Dermatology and STDs, said he was optimistic amid ongoing talks with the government.

“I think the government most likely will commit to pay that,” he said. “We are very much on track.”