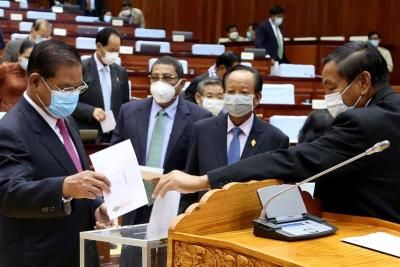 The National Assembly of Cambodia on Thursday (June 4) adopted two draft laws on anti-money laundering (AML) and counter-terrorist financing (CFT) and on combating the financing of weapons of mass destruction (WMD) proliferation.

Speaking during the assembly’s session, Interior Minister Sar Kheng said Cambodia became a member of the Asia Pacific Group (APG) on Money Laundering in 2004 and as its member, the kingdom is required to follow international standards on combating money laundering, terrorist financing and WMD proliferation financing.

“The draft law on AML and CFT is designed to combat money laundering and terrorist financing by identifying measures to control, prevent, crack down on and eliminate them,” he said.