The second time Mr. Sokha descended the stairs of the building for a ceremony in its parking area since police attempted to arrest him on May 26, he led about 100 supporters to mark the day that then-Second Prime Minister Hun Sen cemented his grip on Cambodia. 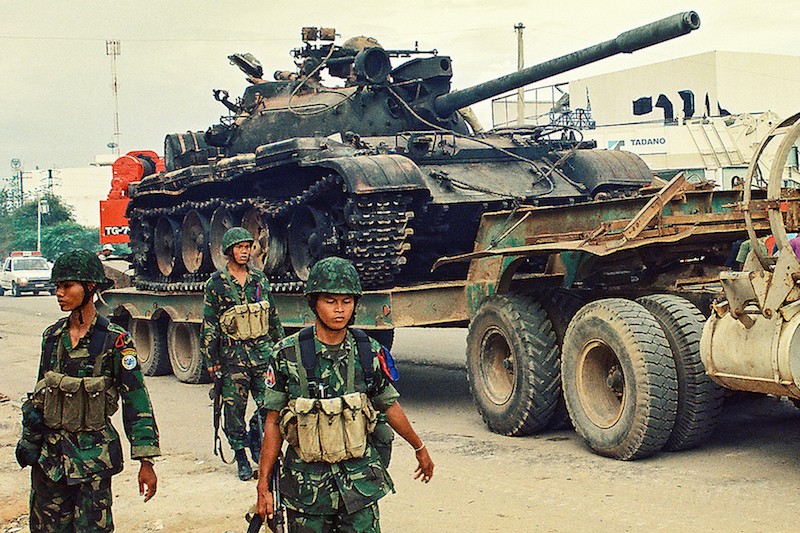 “We want to remember this anniversary forever, because we don’t want it to happen again,” Mr. Sokha said. “Whatever problems occur, please don’t let July 5 and 6 happen again.”

In a veiled dig at Mr. Hun Sen, who became the country’s sole prime minister after defeating a divided field of challengers in the 1998 election, Mr. Sokha also noted that some had lived very comfortably since July 1997.

“Some people have happiness, but if they try to abuse other people, then the happiness cannot stay too long with them,” he said, before returning to the confines of the headquarters.

Nhek Bun Chhay, the general who led forces loyal to the prince during the fighting but later served as a co-defense minister for Mr. Hun Sen in the 2000s, said by telephone that the scores of people killed and injured in 1997 were still without justice.

“It’s an injustice for them, and their families are always asking for justice, and about those who made this happen,” said the former general, who left Funcinpec last year to start his own minor party. But Mr. Bun Chhay was coy about who was responsible for the battle.

“At the time, there were a few reasons that made it happen, after the two parties—the CPP and Funcinpec—had suspicions toward each other,” he said. “Prince Norodom Ranariddh should also respond: How can we find justice?”

The prince, whom Mr. Hun Sen has blamed for the fighting that came after a year of provocations from both sides, could not be reached.

The two days of fighting in Phnom Penh saw more than 200 military and security officers loyal to the prince killed, tortured and arrested, and scrubbed Funcinpec’s victory in the 1993 U.N.-run election.

A U.N. report released in August 1997 confirmed that at least 41 opponents of Mr. Hun Sen were summarily executed over the two days, including Interior Ministry Secretary of State Ho Sok,who was shot dead at the age of 39.

Mr. Hun Sen denied the events amounted to a coup d’etat. He said the prince cut a deal with remaining Khmer Rouge guerrillas in the country’s northwest and was trying to execute his own coup, forcing the CPP to intervene to prevent it.

“There are probably no more than 50 people in Cambodia who have read the report,” Mr. Hun Sen said of the U.N. report in a BBC documentary aired in November 1997. “There are 11 million people in Cambodia. They don’t understand what the human rights report is about.”