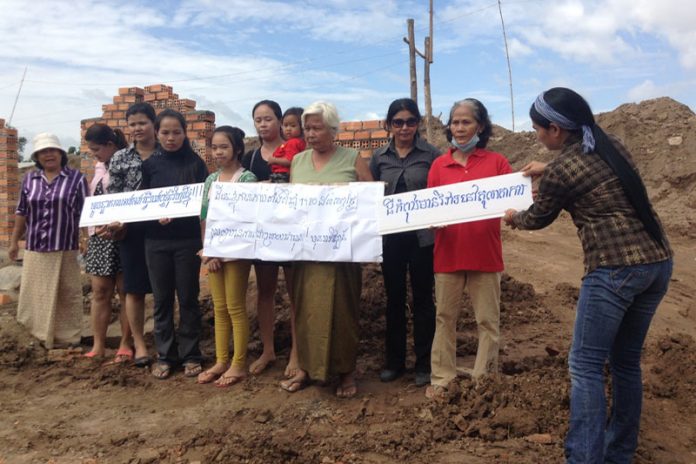 When two middle-aged novices emerged with signs protesting the development of disputed land near the tip of the Chroy Changva peninsula on Thursday, one of the country’s foremost anti-eviction activists was there to tell them they were doing it all wrong.

“No. You need to add the name of the company and name the municipality,” said Tep Vanny, 33, who for years has fronted the fight of more than 2,000 families evicted from Phnom Penh’s Boeng Kak community.

“You need to be clear about which company grabs your land and who allows them to do it—you need to show the public who is responsible for injustice.”

The first-time demonstrators had produced a sign that said: “This case still has a dispute in the court.”

Ms. Vanny, who was sent with a team of Boeng Kak’s best to teach the power of protest to two families who used to grow corn and pumpkins on the disputed land, was not impressed.

After 30 minutes of their first lesson—producing slogans—the women emerged once more, this time with placards emblazoned with Ms. Vanny’s near-flawless script.

“City Hall and Sokha Hotel company conspire to steal my land,” one read.

Then, like a film director on set, Ms. Vanny went about explaining to the women how best to position themselves so as to expose their message to workers on site and drivers in trucks passing by, all while maintaining the best possible photo opportunities for the media.

“I have experience of seven years, so I know how to make your problem a bigger problem that is known by everyone,” Ms. Vanny said. “You need the media to broadcast your message.”

The message from the two families is that Sokha owner Sok Kong, with the permission of City Hall, has destroyed three vegetable patches that they had cultivated since settling on the land across the road in 1980.

Hing Khanchena, a 33-year-old medical center supervisor who has been fighting for the vegetable patches on and off since Sokha began digging up the land in 2011, said that complaints to all levels of officialdom—from commune to City Hall—had gone unanswered.

“We never even thought of making signs before. Now [Mr. Phearum] has sent these ladies to help us.”

Accompanying Ms. Vanny in the crack team of eight protest experts was Yorm Bopha, who spent 15 months in prison on charges related to her activism, and Nget Khun, a 70-something woman who can often be found on the demonstration frontline spraying vitriol at police, security or whoever else is on the other side of the barricades.

The women were prominent at a Khmer Krom protest at the Vietnamese Embassy on Monday and Tuesday, as well as the release of eight CNRP officials from Prey Sar Prison on Tuesday afternoon. But Ms. Bopha said Thursday’s lesson in Chroy Changva was almost a bridge too far.

“I am so tired. Every day we protest and now I have to be the teacher,” she said. “But these people have no power; I want to give them power.”

Ms. Khun, however, who has been injured by police numerous times while protesting, took time out to share stories with Neang Saley, the 68-year-old matriarch of the two Chroy Changva families.

Ms. Khun said it was important to identify “the official who violates the land. Find the puppet who grabs the land and curse him.”

Ms. Saley, who explained that she used to grow vegetables for a living but now has no job, said she felt empowered by Ms. Khun and the women protesters of Boeng Kak.

When the novice protesters assembled with their new signs for their first take, Ms. Saley jumped to the center.

“[Ms. Khun] is an amazing woman. She is so old but I know she joins every protest,” she said. “She makes me wake up and I want to follow her.”

The two families said that they would begin protesting each day until City Hall recognized their cause.

On her way out, Ms. Vanny, who said she has taught the intricacies of demonstration to at-risk communities in seven provinces since the start of 2013, reminded the Chroy Changva families to stay on alert.

“Once we start, we have to do it every day. We have to use new strategies. Using the same actions won’t work,” she said before leaving.

And if the community needs another lesson, Ms. Vanny said she is only a phone call away.

“No one has called us to do any protest [today] so we are not busy,” she said. “But if any community calls us to a dispute, we go.”