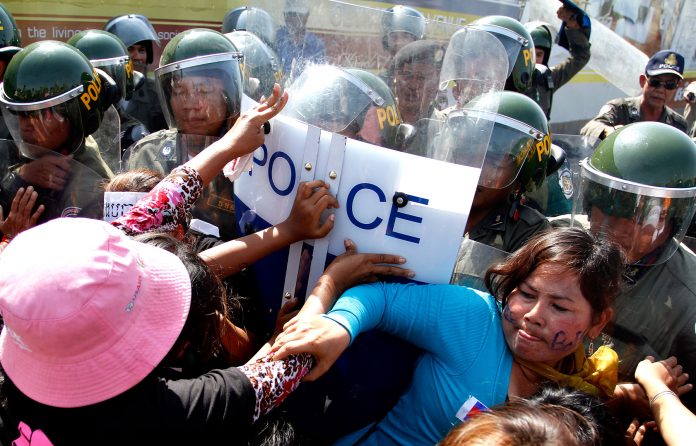 The Phnom Penh Municipal Court yesterday meted out a three-year jail sentence to the Boeng Kak anti-eviction activist Yorm Bopha for her role in the beating of two men, and also convicted three of her family members for the same crime.

The court’s decision was met with anger from fellow activists outside the court and derision from human rights groups who believe the prosecution was aiming to suppress a strident activist and land rights protester who has spent years demonstrating against the eviction of families from the Boeng Kak site, which is owned by Shukaku Inc., a firm part-owned by CPP Senator Lao Meng Khin.

Ms. Bopha, 29, was arrested in September and accused of playing a part in an August 7 assault on motorcycle taxi drivers Vat Thaiseng and Nget Chet. Her husband, Luos Sakhorn, was also arrested, but later released on bail.

Judge Suos Sam Ath yesterday sentenced Ms. Bopha to three years in jail for committing intentional violence with aggravating circumstances. Her husband, Mr. Sakhorn, was given a three-year suspended sentence and Ms. Bopha’s brothers, Yorm Kanlong and Yorm Seth, were also convicted to three years in absentia for using an ax and a screwdriver to beat the two men.

“According to the evidence and witnesses, the four defendants came together and committed the attack on the victims. Luos Sakhorn was at the scene but he didn’t commit the attack.”

Justifying the court’s decision, Judge Sam Ath said that the defendants had no evidence for their claims that they did not even see the attack take place.

However, the court only heard evidence against the defendants from the victims themselves, and interviewed no other witnesses to the event.

Ny Chakrya, Adhoc’s head of monitoring, said that on the evidence seen in court, it was a question of the victim’s word against the accused.

“The court relied on the civil parties [the victims] who were drinking” before the incident, he said, adding that he believed the charges against Ms. Bopha were contrived because of her regular activities as a land rights protester.

“The trial was marked by irregularities, while the integrity of the decision is seriously undermined by the lack of evidence presented at the court. Instead, the conviction of Yorm Bopha highlights the judicial harassment faced by activists willing to oppose the authorities and powerful private companies in the pursuit of their land rights,” the Cambodian Human Rights Action Committee, a coalition of 21 NGOs, said in a statement.

As a tearful Ms. Bopha was taken out of the court and back to jail yesterday, she remained defiant.

“The court has not provided justice for me. This is a society of dollars,” she told reporters outside the courtroom.

“I hope someday I will get justice.”

Ms. Bopha’s lawyer, Chan Socheat, said he would discuss with his client whether she would appeal the verdict.

In front of the court, protesters gathered from early in the morning, watched closely by a line of riot police, which blocked the road both yesterday and Wednesday, when the hearing began.

At first, there were joyous scenes as Tim Sakmony, the Borei Keila resident convicted of making a false declaration but freed by the court on Wednesday evening, made an appearance. But on hearing the news of Ms. Bopha’s conviction, the hundreds of supporters wailed and took their anger out on police riot shields.

One woman in her seventies, also a longtime Boeng Kak activist, collapsed after apparently being shocked by an electrified riot shield, and at least two others fainted after tussling with police.

At the other end of the street, supporters of the plaintiffs celebrated.

“The court’s result made us very happy,” said E Sophors, president of the Cambodia for Confederation Development Association (CCDA), a collection of young male tuk-tuk and motorcycle drivers, who have held similar counter protests on a number of occasions.

Earlier in the day, the crowd supporting Ms. Bopha ousted a man from their group who they claimed was a CCDA member, highlighting the tension between the sets of supporters.

Vorn Pao, president of taxi drivers’ union the Independent Democratic of Informal Economic Association, who demonstrated with Boeng Kak residents, warned that the CCDA might be doing someone’s bidding by protesting against Ms. Bopha.

“[The CCDA] might be manipulated by someone—a company or authorities—because we believe that those who came were hired for $5 a day,” he said.