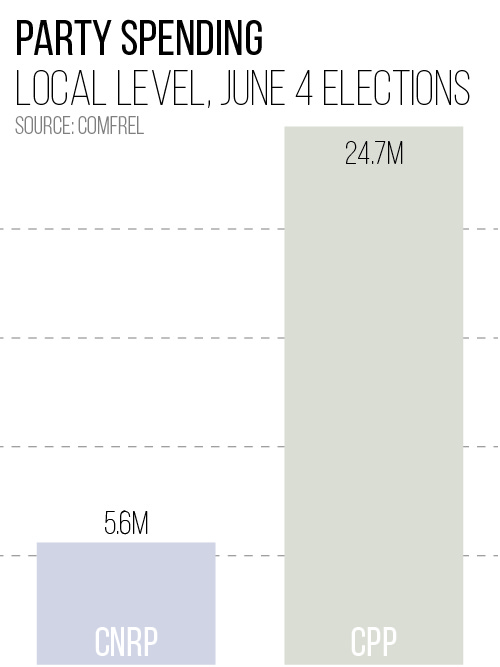 The ruling party spent more than four times as much per commune as the opposition during the campaign period for the June 4 commune elections, according to a rough estimate released by the Committee for Free and Fair Elections (Comfrel) on Saturday.

The estimates, which were presented at a news conference for an election-NGO consortium calling itself the Situation Room, showed the CPP spent an average of $15,000 across 1,646 communes for a total spend of $24.7 million, compared to $3,500 per commune and $5.6 million for the CNRP.

The ruling party spent two-thirds more than it did in the 2012 local election campaign, according to Comfrel’s estimates, while the CNRP’s spend almost doubled from that year.

The CPP won about 70 percent of the commune chief seats and almost 51 percent of the popular vote this year, according to official election results released on Sunday, with the remaining seats and votes overwhelmingly going to the CNRP over smaller parties.

The spending figures were compiled by independent monitors stationed in nine sample communes divided equally into three categories: small communes with fewer than five councilor seats up for grabs, medium ones with six to nine seats and large ones with more than 10 seats, according to Sean Bunrith, a monitoring officer at Comfrel.

The monitors used standardized market prices and interviews with locals to tally spending on campaign events like rallies and meetings, including promotional material and “gasoline money” provided to participants, he said.

“After we got information, we calculate the average of nine communes” to come up with a countrywide average, he said.

The estimates do not take into account national-level spending on television ads or large rallies in Phnom Penh, pre-campaign handouts or spending, or infrastructure spending on items like roads that is often undertaken by the ruling party in the runup to the vote, according to Mr. Bunrith.

“It’s just only the number we give to the public to make it easy to understand,” he said, adding that the organization had sent a letter to the parties requesting official numbers but had yet to receive any responses.

CPP spokesman Sok Eysan said he had never seen any campaign spending totals since they were the responsibility of commune and provincial officials.

Still, he believed the party had actually spent less this year than in the last commune elections, citing the small number of large campaign rallies compared to the 2012 elections.

“As far as I know, the spending was less than the previous one because there were only the beginning and closing marches,” Mr. Eysan said.

CNRP spokesman Yim Sovann said the party had in fact spent “almost exactly” $2 million, 85 percent of which was raised by domestic supporters, with the remainder coming from overseas.

Mr. Sovann downplayed the influence of cash on the campaign, saying the party was proud of the results it had achieved on a limited budget.

“It’s not about the money,” he said. “It’s about the rightdoing or wrongdoing.”

Mu Sochua, a CNRP vice president, said the party might have been too busy to provide its figures to Comfrel.

Political analyst Meas Nee said that without a strict campaign finance law, it was impossible for anyone to make an accurate account of spending, creating a situation conducive to vote buying, corruption and nepotism.

“I don’t think they are willing to open up,” he said of both major parties.

Comfrel’s estimates seemed plausible, Mr. Nee said, but likely undercounted spending by the CPP, whose village chiefs he said handed out cash at night during the “dog-barking season”—the name given to the commotion kicked up by pets in rural areas when politicians are said to visit homes and give gifts before an election—on the days before the vote.

“They distribute a lot of money at the village level,” he said.