Home News Be it a lesson in ancient architecture in Cambodia or an adventure...

With a gentle hiss the tyres of my Bangkok Airways airplane kiss the runway at Siem Reap. The flight is uneventful, but there is an air of anticipation shared by us first-time visitors. Today’s born-again Cambodia is the ‘successor-state of the mighty Khmer Empire’ that also held sway over Vietnam, Laos and Thailand, and became the cultural heart of Southeast Asia between the 9th and 14th centuries.

Late-afternoon sunshine and shadows cartwheel their way through the rural and urban Cambodian vistas, as we sync both our timepieces and hearts with this land known for its monumental treasures, architecture and cultural narratives documented in stone. And then we have the scars left by its days of war and no roses, under the brutal regime of the radical Khmer Rouge (1975–1979), with the totalitarian Pol Pot at its helm. It led to the near-annihilation of the urban middle class and the intelligentsia among the two million killed. Novelist Amitav Ghosh once said that this was not a civil war, but “an experiment in the reinvention of society.” 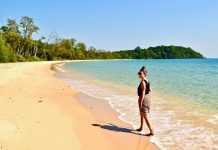