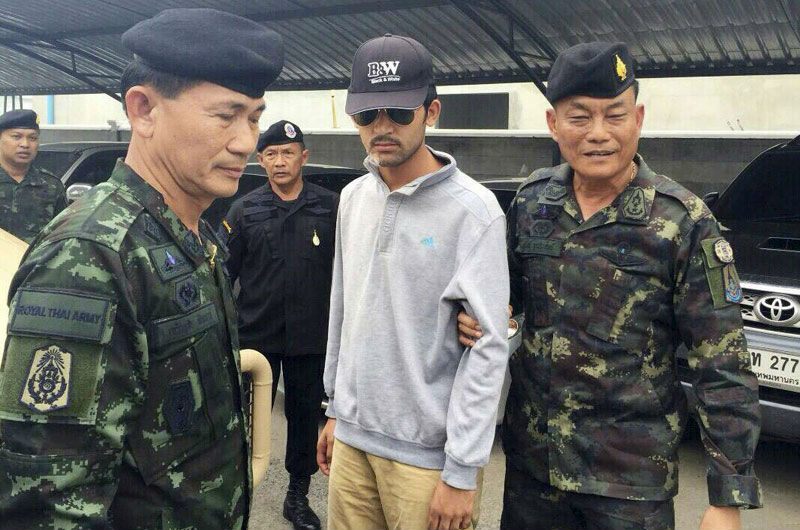 The chief suspect in the deadly August 17 bombing of Bangkok’s Erawan Shrine was arrested about 500 meters from the Poipet International Checkpoint Tuesday afternoon, according to officials, just hours after Thai media reported that he and another suspect had fled to Cambodia.

The Bangkok Post, citing an anonymous police source, reported Tuesday afternoon that the suspect—one of seven people currently wanted in connection with the bombing that killed 20 people—was arrested on Cambodian soil. But Cambodian officials said the report was wrong.

“He was not arrested in Cambodian territory,” said Banteay Meanchey provincial governor Kousoum Saroeuth. “He was arrested in Thailand’s Rongleu market.”

Um Sophal, chief of police in Poipet City, also said that the suspect, who has not officially been identified, was arrested on the Thai side of the border.

“We called the Thai police. He was arrested by a Thai soldier,” he said.

Earlier Tuesday, the Bangkok Post, again citing an anonymous source, reported that two suspects in the bombing had crossed into Cambodia from Thailand’s Sa Kaeo province via the Poipet border checkpoint. The report also said that Thai authorities had requested the assistance of their Cambodian counterparts to make the arrests.

National Police spokesmen on both sides of the border, however, dismissed the reports.

“They suspect, but they are not sure,” Cambodian National Police spokesman Kirth Chantharith said when asked if Thai authorities had informed him that the two had entered Cambodia.

“We have no new information and no reason to say they have entered Cambodia,” he said.

“I haven’t said that they are in Cambodia,” he said. While Thai police had put Cambodian authorities on the lookout for the suspects, he added, those exchanges were “not specific to Cambodia.”

“We have asked everyone, everywhere” to be on alert, he said.

Thai media, citing officials, reported that the arrested man was the yellow-shirted suspect whose photograph was shared around the globe after footage emerged of him placing a backpack under a bench in the vicinity of where the bomb exploded.

Also according to Thai media, the second suspect thought to have fled to Cambodia is the blue-shirted man who can be seen in security camera footage dropping a backpack containing a bomb into a waterway nearby.

Sim Sam Ath, chief of immigration at the Poipet checkpoint, said the media reports were the first he had heard of the two suspects entering Cambodia.

“We haven’t seen [the suspects cross the border] and we just got the information with no exact sources,” he said at about 3 p.m., shortly before reports of the arrest in Thailand surfaced.

Earlier in the day, Interior Ministry spokesman Khieu Sopheak said he had received no information to suggest that any of the suspects were in Cambodia and no request from Thai authorities to look out for them.

“However, it is our obligation and duty as Cambodian authorities to combat terrorism,” he said. “If there is a request, we will cooperate.”