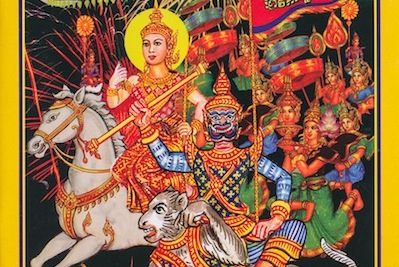 At Their Peril, Some Blasé About Year of Monkey

An angel wearing frangipani flowers and drinking fresh milk will descend on Cambodia riding a donkey at 8 p.m. on Wednesday, clasping a long needle in her right hand and a regal walking stick in her left.

Relieving one of her six sisters from a year of earthly duties ensuring that their father’s severed head does not fall to the ground and cause Earth to burn to a crisp, she will usher in the Year of the Monkey.

It’s enough to make the calmest of people a bit anxious, as Cambodians head back to their hometowns in the provinces from Wednesday to Saturday, marking the Khmer New Year and leaving the cities at a standstill.

Yet for those hoping to make the best of Mondea Tevi’s descent—and her stewardship over the next year—the Ministry of Cults and Religion has a handy annual almanac to guide the way: the Moha Songkran.

The weather next year? Not too hot, not too cold. But storms will be constant, brought on by the activities of two dragon kings in another universe. As the water levels in the rivers and lakes rise, floods will come.

For farmers, the rice harvests may only be average but the grains won’t be too badly damaged.

The almanac offers more than general forecasts. For the reader seeking an edge in the Year of the Monkey, detailed fortunes are also provided, broken down by zodiac birth year and gender.

“This year is a year that might not be so good for you,” the almanac warns men born in the Year of the Horse. “You will be tired of your friends and relatives, and they will break some of your reciprocal obligations. Not only that, you will lose some benefits.”

“In fact, you will not suffer too much if you meet obstacles in your work—they will disappear, because this period will see someone helping you to be happy,” it adds. “Sometime this year, you will move your house, fix it, or build a new one.”

Srey Doek, commander of the military division stationed at the sometimes volatile Preah Vihear Temple on the Thai border, who was born in the Year of the Horse, said he would take his fortune with a grain of salt.

“Some are true, and some are not,” General Doek said, offering his own prophecy for the year.

“The country will have peace, people’s livelihoods will improve and the situation along the borders will be calm. But the weather this year will be too hot, and I hope the people can harvest more,” he said.

For opposition leader Sam Rainsy, who was born in the Year of the Mouse, the almanac foretells that the New Year angel will guide him through a period during which his work flourishes.

“However, your success will be envied by bad people,” the fortune says. “You have to be courteous with some bad people who will come and pull your leg and flatter you to work with them.”

“Whatever work he suggests, it’s not something good. You should not carry anything heavy because your waist could be strained, and you could be easily susceptible to disease,” it concludes.

Mr. Rainsy, living in exile in France, said he too was not concerned by the ominous fortune.

“I don’t believe in fortune tellers,” Mr. Rainsy said in an email. “Instead, I believe that each one of us is his or her own fortune maker. Nevertheless, out of people’s credulity and the countless possible scenarios [that] can unfold over time, there can be coincidence and possible fun.”

However, Mr. Rainsy dismissed the advice not to carry heavy things next year.

“In my life I have always carried heavy things,” he said. “Is it because I like it or is it the fate anyway of those who can carry the heaviest things? Yes I can.”

On the other side of the political aisle, CPP lawmaker Chheang Vun said that he, too, was the master of his own domain and was unimpressed by promises of a new position and acquisitions of vast property next year as a man born in the Year of the Rabbit.

“Everything we have to get by striving for it by ourselves,” Mr. Vun said. “I used to live in comfort in France, but I abandoned it to come to Cambodia and serve the people.”

This past Year of the Goat has been a bad one for Nhiek Bun Chhay, the former co-minister of defense, who lost control of the royalist Funcinpec party in a power struggle with Prince Norodom Ranariddh.

Born in the Year of the Rooster, the coming year may not be much better for him.

“This year you will meet bad luck, get lost or become sick,” reads Mr. Bun Chhay’s fortune. “If you want to do something, please be careful. If you are careless, you will suffer. Please keep a low profile.”

However, for CPP spokesman Sok Eysan, also born in the Year of the Rooster, the issue was serious.

“I have to go and get a water blessing,” Mr. Eysan said, coy about whether he truly believed.

“This is an ancient algorithm, and there is right and wrong. But I have to go get a water blessing to clear out this feeling,” Mr Eysan added.

Even the royal family is not spared from a rough fortune. Prince Sisowath Thomico—like Prime Minister Hun Sen—was born in the Year of the Dragon, earning him a mixed forecast that starts with news of bad luck but ends on a positive note.

“You have to commit to overcome these obstacles and should commit to strict work all the time. If you do this, you will get success bit by bit,” it says.

“I am expecting more and more obstacles in the year to come,” the prince said of the prediction. “They will be political obstacles, because I belong to the opposition and the ruling party is more and more aware of our strength.”

“But as a Buddhist, I don’t believe in predictions,” he added. “There is a contradiction between Buddhism and animism. The Moha Sangkran is more animism than Buddhism. If you look at the symbols of the new year, most come from animism—from Brahmanism.”

“You should ask Son Soubert. He knows a lot about this kind of thing,” Prince Thomico added.

Indeed, for Mr. Soubert, a retired member of the Constitutional Council who was born in the Year of the Horse, the news that friends will not follow through on their promises over the next year was sour but inescapable.

“You don’t believe it?” he asked. “It’s an old system that dates back several millennia. Many civilizations have made calculations about what they observe in the skies, and over time they notice certain patterns.”

“We are subject to the planets. In one way or another, you will receive some influence whether you believe it or not. When the moon is near to the Earth, it makes the tides go up,” Mr. Soubert said.

“If nature is under the influence of the planets, why wouldn’t people be under its influence? It’s logical.”

The negative tendency among most forecasts for the New Year, he added, was concerning.

“I have heard that, in general, it will be a very rough monkey year,” he said.