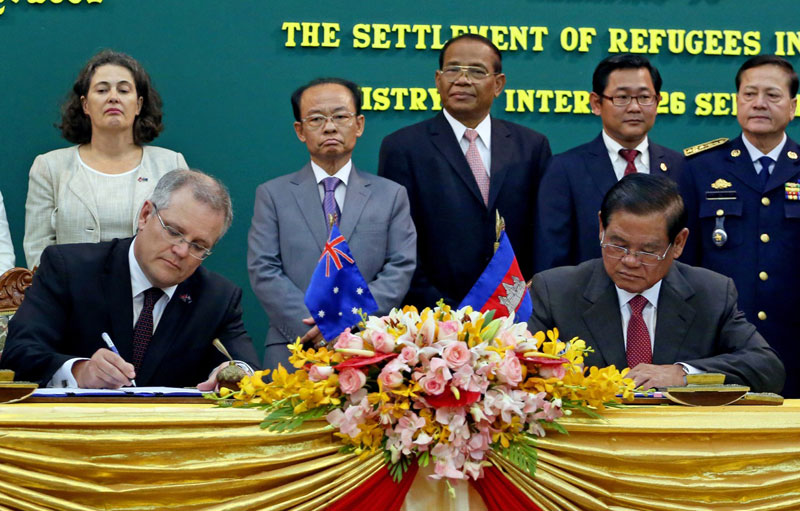 As many as five of the hundreds of asylum seekers Australia is holding on the South Pacific island nation of Nauru have agreed to be the first to take up an offer from Cambodia to resettle here, according to a refugee advocacy group.

Australia is refusing to take in any of the asylum seekers trying to reach its shores, and with a $31-million aid package last year convinced Cambodia to resettle an unlimited number of them instead.

On Monday, Ian Rintoul of the Sydney-based Refugee Action Coalition, which is in contact with those on Nauru, said that one asylum seeker from Iran had agreed to move to Cambodia and that four others from Burma and Sri Lanka may have done the same.

“I can only confirm that the Iranian has agreed, but have been told that there are three Tamils and one Rohingyan,” Mr. Rintoul said by email.

He said the five were all men and had been separated from the rest of the refugees and asylum seekers being held on Nauru.

The International Organization for Migration, which has agreed to help any refugee who takes up the offer to resettle in Cambodia, said it could not confirm Mr. Rintoul’s report.

Under the deal with Australia, Cambodia agreed to take in only those people with approved refugee claims on Nauru and who volunteer. But with none of the refugees on Nauru interested in coming to Cambodia as yet, Mr. Rintoul said Australia may be trying to fast-track the applications of the five asylum seekers who are.

In a letter distributed to refugees on Nauru last week pitching Cambodia as a new home, Australia says the first flight for Phnom Penh would leave as soon as Monday. On Monday morning, however, Australian Immigration Minister Peter Dutton said the flight had been delayed.

“Our concern is that the [Australian] government is desperate to get people on the plane to save political face,” Mr. Rintoul said, “and that asylum seekers are being coerced to accept, because they are being offered a lot of money and may have been led to believe that accepting Cambodia is the only way to guarantee them a refugee visa.”

He said that those on Nauru were being offered cash payments of up to $11,675 to move to Cambodia.

A spokesman for Cambodia’s Foreign Affairs Ministry said he did not know the status of the resettlement efforts. A spokesman for the Interior Ministry also said he had no update on the situation.

Kerm Sarin, who heads the refugee office at the Interior Ministry’s immigration department, said a delegation of three officials left for Nauru on Sunday evening to look for volunteers but would not meet with any asylum seekers.

“Our objective is to meet the refugees, meaning the people who have already obtained refugee status, not asylum seekers,” he said.

Last week, a spokeswoman for Mr. Dutton, Australia’s immigration minister, said that some of the refugees had expressed interest in coming to Cambodia and that the first group was expected to arrive “in the near future.”

Mr. Dutton told ABC Radio on Monday that the day’s flight to Phnom Penh had been delayed due to “logistical issues.” He did not explain exactly what the issues were, but accused refugee advocates of disrupting the resettlement efforts by spreading misinformation.

“In relation to the claims that people aren’t prepared to go, they are false,” he was quoted as saying.

“I think we’ll demonstrate the success if those people arrive in Cambodia, if they establish their new lives. They’ll be able to message back, I think, that the refugee advocates and those who sought to disrupt the process did so with some sort of good intent, I’m sure, but in the end they were misinformed.”

Mr. Dutton’s office did not reply to a request for comment.

The letter from his department being disseminated on Nauru lays out what help those refugees who take up the offer can expect upon landing in Phnom Penh.

The offer includes cash in hand, a bank account, health insurance, language training, free temporary housing and help finding permanent accommodation and work. It says their families would be able to join them, that they will get to apply for Cambodian citizenship, and that any children born to them in Cambodia will get citizenship, too.

But the letter also makes a number of false claims about life in Cambodia.

It claims that Cambodians “enjoy all the freedoms of a democratic society” including free speech, face no problems with violent crime and have “a high standard of health care.”

The Australian immigration department’s own online advice to visitors to Cambodia contradicts the letter’s claims on all three points. The website says police sometimes respond to the political gatherings with force, lists a number of safety risks, and calls the overall state of health care “very poor.”

The department has refused to account for the letter’s lies.