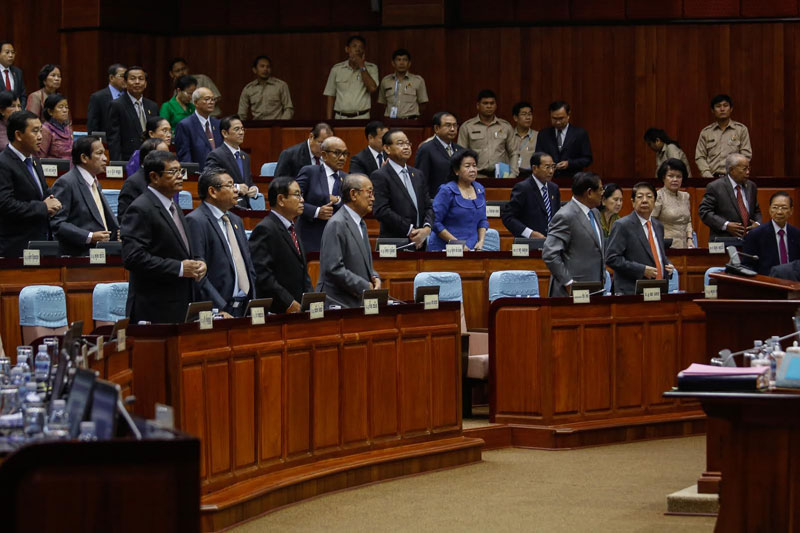 The National Assembly on Thursday unanimously approved the country’s two new election laws, paving the way for the new bipartisan National Election Committee (NEC) to be established before the Khmer New Year in mid-April.

After seven months of talks to draft the law to create the NEC and to amend the existing national election law, 103 of the country’s 123 lawmakers attended a special session of parliament Thursday to vote on the laws.

Opposition leader Sam Rainsy took to the floor to ask the lawmakers not to debate the two laws, which he finalized with Prime Minister Hun Sen and Interior Minister Sar Kheng in separate talks last year and last month.

“I believe the National Assembly and the population as a whole will clearly recognize the achievements of the working groups from the two parties that have successfully worked together,” Mr. Rainsy said.

“The content of these two laws has been critically and fully discussed, so the National Assembly today does not need to raise this or that point for debating anymore, as the working groups have done the in-depth work,” he said.

“So today is just a day for congratulations that the result [of last year’s political deal] is coming into shape [through] the two proposed laws.”

CPP lawmaker Pen Panha, who heads the National Assembly’s legislative and justice commission, then read out the new NEC law before the 103 CPP and CNRP lawmakers present voted to approve the new law.

Fellow CPP lawmaker Krouch Sam An assisted Mr. Panha in reading the new Law on the Election of Members of the National Assembly, before it too was approved by all 101 lawmakers in attendance at the afternoon session.

Civil society groups have almost uniformly criticized the new laws over the inclusion of provisions banning NGOs from “insulting” or showing bias to parties, but the CPP and CNRP have repeatedly defended the laws.

Among other provisions, election observers could be fined for “disturbing” officials operating booths on polling day, parties could be disqualified from elections if a senior member violates the election law, and foreigners could be deported if found to be campaigning for a party.

Even U.S. Ambassador William Todd has weighed in against the laws, writing in his weekly newspaper column this week that he hoped the National Assembly would reconsider the laws before passing them.

“Many have stated they fear that these changes could make the electoral system less responsive and democratic, rather than more,” Mr. Todd wrote. “I must admit that I am also concerned and do not understand how these limitations are improvements.”

Mr. Rainsy told reporters at the National Assembly on Thursday that the CNRP would be open to deleting some of those provisions from the law in the future, acknowledging for the first time that the new laws have potential problems.

“As it’s an agreement, we have to give some concessions to each other,” the opposition leader said. “From the start, the CNRP’s position was to have 100 percent good laws as the civil society groups wanted,” Mr. Rainsy said.

“We are not 100 percent satisfied but we needed a solution, and that requires giving concessions…so it’s a balanced solution,” he added.

“For the CNRP, we are awaiting a chance to improve the law. Whatever the civil society groups are not satisfied with, we will try to find a solution,” he said, refusing to offer a timeline to negotiate such changes.

“Whenever there is an opportunity. It will be up to circumstance to get rid of the concerns of the civil society groups and the people to make sure we have 100 percent freedom of expression without any limitations.”

Amending the laws, however, would require further talks with the CPP, which has steadfastly defended the inclusion of the controversial new provisions.