On Tuesday morning, city officials attempted to hold a ceremony that would ostensibly mark the end of a yearslong dispute that came to a head four years ago when hundreds of families were evicted from the neighborhood to make way for a development by the Phanimex company. 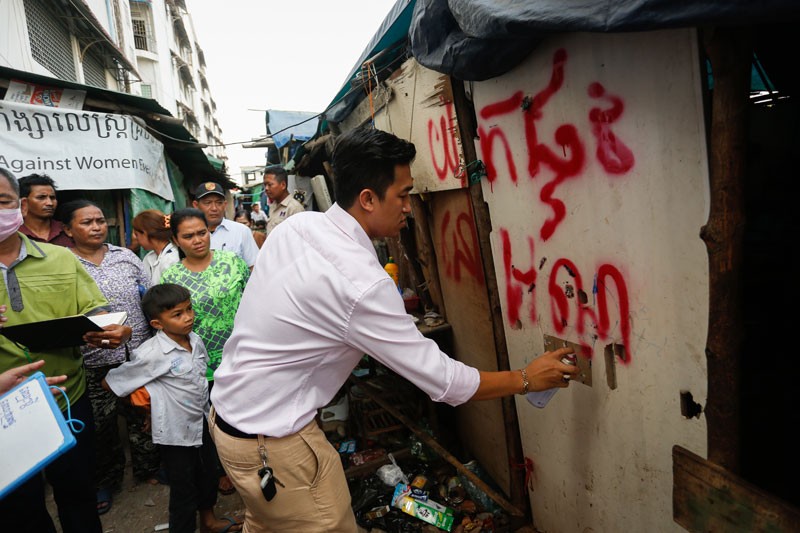 City Hall initially offered residents whom they deemed eligible one of three compensation packages: 35 families were offered an apartment in one of eight blocks built by the Phanimex at the site; 85 were given a choice between $5,000 or a house in Andong village in Kandal province; and 34 were offered $3,000. But the ceremony was called off after activists crashed the meeting in protest of all of the offers, which they said were insufficient, and the lack of deals for 29 additional families living at the site.

Mean Chanyada, the municipal chief of administration, said 82 families have since visited the Prampi Makara district office to sign the compensation agreements.

Of the group, 39 families took $5,000 compensation, while 16 received a $3,000 payment and four agreed to move to Andong. He said a new deal was also struck for 23 additional residents to receive $2,000 and relocate to Kandal.

About 10 makeshift shelters in Borei Keila were knocked down on Thursday as residents began moving from the slum that was created on the edge of the eviction site. (Phanimex backed out of its promise to build 10 apartment blocks, building only eight and leaving many families homeless.)

Kim Hong, a former Borei Keila resident who accepted $5,000, said he was far from pleased. “I’m not happy; $5,000 cannot buy me a new house because everything is so expensive,” he said.

Previous articleKerry to Meet With Civil Society, CNRP in Visit
Next articleTrio Gets Heavy Sentences for Heroin Smuggling