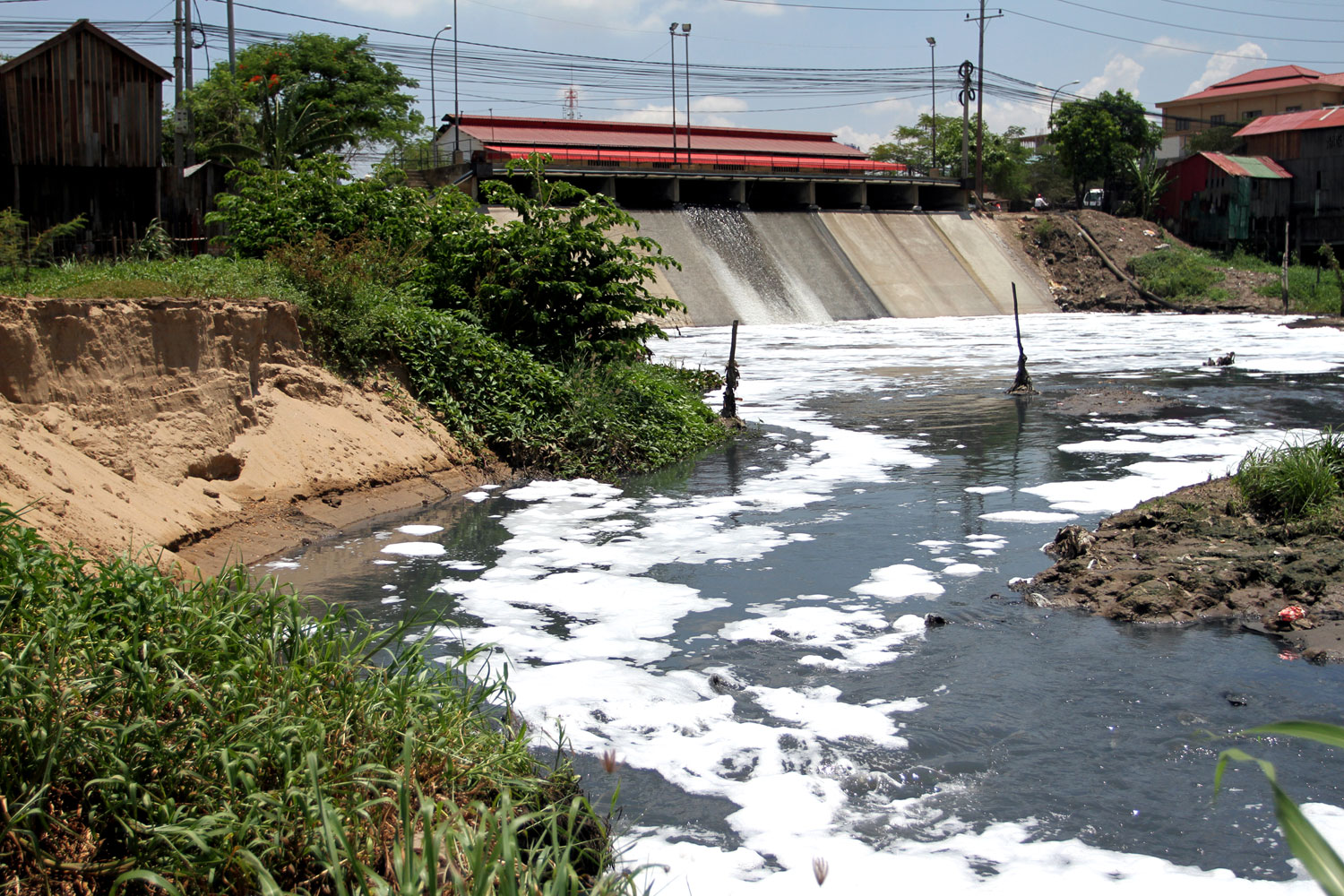 As Phnom Penh Grows, So Does Its Sewage Problem

Since 1998, Phnom Penh’s population has doubled to more than 2 million. High-rise buildings have popped up in the city’s center and housing developments have been hastily erected.

Yet the city’s antiquated, decades-old drainage system has undergone little improvement in that time and experts say the rapid urban growth currently under way could outpace the drainage system’s ability to channel rain and the increasing amount of wastewater out of Phnom Penh.

Although the Japan International Cooperation Agency (JICA) has been working with City Hall since 1999 to improve the drain­age system, there is still no plan to install a wastewater treatment plant in order to prevent vast amounts of raw sewage being pumped into the city’s lakes and waterways.

Adding further complications, City Hall has no complete underground plans of the drainage network and possesses limited means to ensure that piping is prop­erly maintained. Authorities also have no data on how much sewage the city currently produces.

JICA is currently constructing 20 km of additional piping in central Phnom Penh. Once a toilet is flushed, the wastewater travels down the pipes, through open canals or the underground drainage system and eventually arrives in Boeng Trabek, where morning glory and lotus plants partially purify the sewage through natural processes.

Plants in the reservoir absorb the discarded water’s bacterial nutrients and break down the waste before it is funneled, black and fetid, through the Boeng Trabek pumping station. The contents are then emptied into Boeng Tampoun and finally ejected into the Tonle Bassac and Tonle Sap rivers.

“Phnom Penh City has been de­veloping very fast and many commercial and industrial activities have been located in the downtown and peri-urban areas and the waste water from these activities is generally high contamination,” said Seng Solady, a program officer from JICA, in an email. “With this situation, the construction of a wastewater treatment plant is very important for treating the wastewater from the city before discharging it to the river and to avoid impacts on environment and people’s health.”

Uchida Togo, an adviser on JICA’s $105 million drainage project, which is scheduled to come to a close in 2015, also said that large construction projects such as new shopping malls and towers are placing more strain on the capital’s aging network of pipes.

“It affects everything,” he said, referring to the growing number of construction projects. “And of course, the amount of drainage increases or decreases depending on the project.”

Last year, alone the total value of approved construction projects nationwide increased by 72 percent to $2.11 billion, compared to 1.23 billion in 2011.

In many cases, projects go up in Phnom Penh without informing local authorities, meaning there is very little knowledge about the possible strains being placed on the city’s underground infrastructure.

“It’s really difficult to know every activity by the private sector,” Mr. Togo said. “At least from JICA’s side, we want to share information and advocate for it so that our project makes sense but there can always be cases where we miss out and the government misses out.”

In a 2008 report, the U.N. said that the pumping of raw sewage into the city’s lakes was a “major threat” to the urban environment and was adversely affecting human health.

“The inadequate disposal of wastewater and solid waste continues to cause a major threat to the urban environment. Municipal and domestic sewage is a key source of seasonal and local water pollution,” the report, titled Cambodia En­vi­ronment Outlook, says.

At Boeng Trabek, where tons of raw sewage is pumped into the lake daily, residents living in wooden shacks say they have been living with the putrid smell of sewage water for years.

“My mother picks the morning glory here to sell it at the market in the rainy season,” said Pich Srey Pov, 28. “The water from the canal can get really smelly when it rains and it floods the whole area, but it hasn’t been as bad in recent years.”

Pes Pich Phearun, an employee for a waste disposal company that empties septic tanks, said he makes two trips to the edge of Boeng Tampoun every day and discards a total of 10,000 liters of wastewater collected from tanks throughout the city.

“I don’t think it’s good to keep sewage water here because it is going into the river and it’s making the water dirty. But if I don’t pump it here, then I don’t know where to pump it,” said Mr. Pich Phearun, who declined to give the name of the company he works for.

Noun Rithy, CEO of Bonna Realty Group, agreed that many private developments often leave the issue of drainage as an afterthought. This is coupled with the fact that municipal authorities do very few of their own checks on the drainage provisions of new projects.

“We are concerned with the developers and owners who need to be careful with the drainage system,” Mr. Rithy said. “For example, for the [gated housing communities], they do very beautiful landscape and it’s all nice buildings, but underground, it’s poor-quality pipes, and we don’t know how old they are.”

“The inspection from the ministries is not so strong when checking the quality and standard.”

Mr. Rithy added that a lack of wastewater treatment facilities also meant that an increasing amount of raw sewage is being emptied into Phnom Penh’s canals and lakes, which can affect the environment and sanitation levels.

“All the dirty water from the drain system is not good for the environment and the health of the people and the smell would be bad, so people will not enjoy and be comfortable,” Mr. Rithy said.

The 33-story complex is scheduled to open in January 2014 and at full capacity will hold more than 1,000 people, said Hong­suk Jang, planning manager for De Castle Royal. Developers of the project have built their own localized drainage system and plan to connect it to the municipal drainage system. A septic tank has also been built to collect the residents’ waste, and this will join the city’s network of underground pipes.

“It’s our own technology, it has nothing to do with urban planning,” Mr. Jang said, adding that all design plans were already submitted to City Hall for approval and authorities had not voiced any concern about adding pressure to the city’s drainage network.

“The design of our building has already been analyzed with the current situation, so we can expect what would happen when we use a lot of water,” Mr. Jang said.

City Hall spokesman Long Dimanche acknowledged that sewage is an important issue that can cause detrimental effects to the environment. However, City Hall is hamstrung by a lack of funds. The city “does not have the budget” for it, he said, referring to the installation of a sewage treatment plant.

“There have been some private companies who have requested to do a feasibility study on a treatment plan, but nothing is clear yet. But in the future, if there is any company who would like to work on the project, we welcome them,” Mr. Dimanche said.

Mr. Dimanche also welcomed any further assistance from JICA on the matter of sewage treatment and disposal.

Officials in the municipal department of drainage and sewage unit all declined to comment.

Touch Samnang, deputy CEO of the Overseas Cambodia Investment Corporation, which has several large property developments around the city, said that plans for all construction projects must be submitted to City Hall or the Ministry of Public Works for approval.

“That also includes the construction plan and the drainage plan,” Mr. Samnang said.

To ensure that all the extra pressure being applied on the drainage system does not cause in problems, Mr. Togo of JICA said maintenance of the pipes is crucial. JICA donated four pipe-cleaning machines to City Hall this year—two that act as a “sucker” to clear trash and debris out from the pipes and two that clean the pipes once large items have been removed.

“If people don’t throw rubbish into the drainage, it will not clog the system, but here, there is a culture of throwing garbage into the drains,” Mr. Togo said. “If the pipes are not cleaned, and there’s mud clogging like 80 percent of it, then we cannot collect as much rain water. And if no one takes care of it, the whole system will not function properly.”

In preparation for the rainy season, City Hall on Wednesday released a statement requesting that all residents refrain from throwing trash in the streets so that the debris does not clog up the drains and cause more flooding.

Whatever plans the municipality has for improving the city’s disposal of wastewater, everyone agrees that action needs to be taken now in order to avoid straining the system and adding to environmental and health concerns.

“We don’t know the direct impacts of it…we cannot say it until you’ve done a detailed examination of the water quality [in Phnom Penh],” Mr. Togo said. “But what we can see is that it can have some hard effects in the future.”