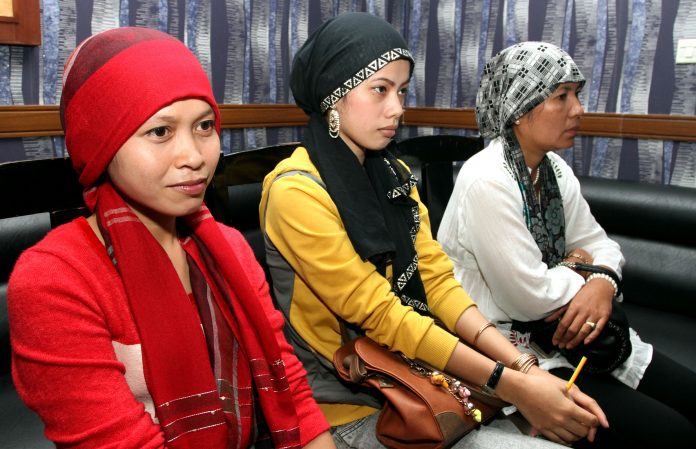 As Elections Near, Opposition ‘Defections’ to the CPP Mount

A staple of every campaign season, the CPP announced Monday the defection of several hundred alleged opposition members—including a small group of disaffected Cham Muslims—ahead of next month’s national election.

CPP lawmaker Seang Nam said he and Defense Minister Tea Banh welcomed 623 former members of the opposition Cambodia National Rescue Party (CNRP), plus 14 members of the party’s local campaign committee, to the CPP at a ceremony in Siem Reap City.

“I think they defected because of internal problems in their party,” Mr. Nam said, but would not elaborate.

A group of 25 Cham Muslims once loyal to the opposition also announced their defection to the CPP on Monday at a press conference in Phnom Penh. Sith Ibrahim—who was, until April, dep­uty secretary-general of the Human Rights Party, which merged with the SRP to form the CNRP—said he and other CNRP Khmer-Muslims felt discriminated against when CNRP leaders asked them to wait until after the election to set up a formal Khmer-Muslim group within the party. “We decided to leave because the party discriminates against the Islamic religion,” he said.

Mr. Ibrahim also claimed that there were 3 million Muslims in Cambodia and boasted that they would all follow his lead in supporting the CPP at the ballot box. According to the Ministry of Cults and Religion, however, there are only about 500,000 Muslims in the country.

CNRP candidate and party spokesman Yim Sovann was dismissive of the recent defections and said most of the people involved were CPP members to begin with.

“This is the old strategy. Only one or two of them are CNRP,” said Mr. Sovann, who also rejected the claims of religious discrimination. “You can ask a million supporters of the CNRP; only a few people say like that,” he said.

Mr. Sovann said he also expected to see the CPP start offering government jobs to opposition party officials who defect as voting day nears, as it has in previous national elections.

“Wait and see,” he said. “It is the old strategy. But the less important members join the CPP only…. No one from the top positions defects.”

In the months leading up to the national election of 2008, the CPP openly courted its opponents’ candidates and officials with the promise of undersecretary-of-state postings at various ministries and Prime Minister Hun Sen himself repeatedly offered to give out hundreds of government adviser jobs to all opposition members who abandoned their parties.

The SRP objected, claiming the job offers violated laws on how the government could spend the national budget.

The tactic nonetheless won the CPP a number of defectors ahead of the election, including at least 10 opposition candidates for the Na­tional Assembly. Among them was Pen Recksy, who was running for an assembly seat with the SRP before jumping to the CPP in exchange for an undersecretary-of-state post at the Ministry of Health.

Koul Panha, executive director of the Committee for Free and Fair Elections in Cambodia, said the CPP was unlikely to be so generous with the offer of new jobs for defectors this time, but only because it gave away so many adviser positions in 2008.

As for the CPP’s frequent re­ports of defections, he said they do have some effect—on undecided voters especially—though it was hard tell just how much. “This is the way they try to show the opposition they are [in] trouble, less organized, and maybe the people feel less confident in the opposition,” he said. “I think it works because they use the media.”

At a temple inauguration ceremony in Kompong Cham province on Monday, Mr. Hun Sen warned the opposition not to accuse the CPP of trying to disrupt its campaign by welcoming defectors.

The prime minister has already ordered his party to prepare a lawsuit against CNRP acting president Kem Sokha for accusing the CPP of disrupting his campaign stops across the country.