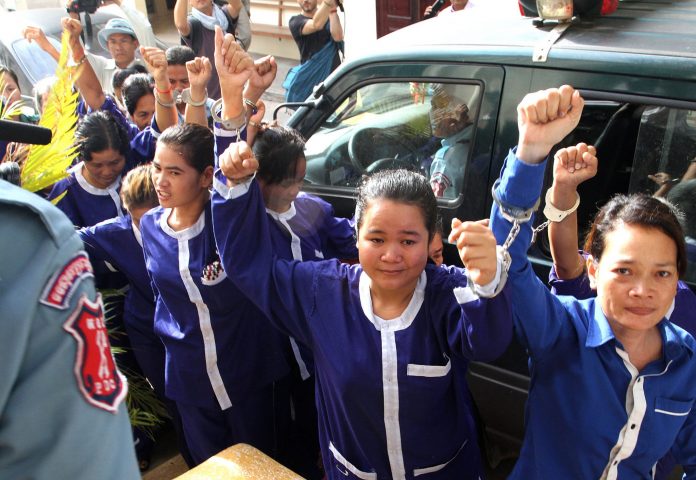 The government arrested more than twice as many land rights ac­tiv­ists and handed out dozens more economic land concessions (ELCs) in 2012 compared to the year before, new figures released by NGOs on Wednesday show.

Pointing to a growing loss of land rights, human rights workers said that many of the ELCs, which are blamed for mass evictions around the country, were approved by the government despite a freeze Prime Min­ister Hun Sen placed on the grant­ing of new ELCs in May.

“2012 was the worst year be­cause the number of people ar­rested increased, like the arrest of political and land activists who stood up and spoke out,” said Chan Soveth, deputy head of mon­­itoring for rights group Adhoc, at a conference organized by the NGO Forum in Phnom Penh on land and housing rights.

Mr. Soveth said authorities ar­rested 201 land activists and protesters last year, which is more than double the 98 they arrested in 2011, and higher than any year on record since 2007.

Among those arrested last year was Tep Vanny, along with a doz­en other fellow residents of Phnom Penh’s Boeng Kak neighborhood. Ms. Vanny became one of a group known as the “Boeng Kak 13” when the municipal court convicted them in May after a summary trial for peacefully pro­testing against their evictions.

The court released the 13 from prison the following month under much local and international pressure but upheld their convictions for illegally occupying land and aggravated circumstances of rebellion.

“The authorities think the people are their enemy,” Ms. Vanny said at the conference. “We women protesters are treated with violence and arrested and painted as the opposition party.

“This is the solution they have for the people and they use the court to oppress the people, to arrest them and send them to Prey Sar prison,” she said.

Though Mr. Soveth did not provide exact figures on the number of newly approved ELCs in 2012 because Adhoc is preparing to launch a special report on the matter in a few weeks, he said the number of approvals surpassed 100. That is compared to 68 ELCs handed out in 2011.

In November, Adhoc said that at least 32 ELCs had been approved after Mr. Hun Sen enforced a na­tionwide moratorium on new land concessions in May.

Government officials have re­peatedly defended the ELCs handed out after Mr. Hun Sen’s an­nounced freeze, insisting that they did not break the moratorium be­cause they were in the pipeline for approval well before the order was passed in May.

The government policy on ELCs maintains that industrial scale agribusiness projects add to economic growth in rural Cam­bodia and put people to work in paid jobs growing crops for local and foreign markets. But those who have studied ELCs, in­clud­ing the U.N.’s human rights en­voy to Cambodia, Surya Sube­di, have found little to no benefit from ELCs reaching local, rural communities.

After a record year of 752,000 new hectares worth of ELCs ap­proved in 2011, according to Adhoc, land concessions now cover at least 2 million hectares in all, or about 10 percent of the coun­try’s total landmass. Adhoc also estimates that some 700,000 Cambodians have been affected by ELCs since 2000.

Government officials said the picture being painted by human rights groups was far from the reality being felt by villagers on the ground.

Beng Hong Socheat Khemro, spokesman for the Ministry of Land Management, objected to the very word “eviction” when discussing land issues in Cambodia.

“There aren’t any,” he said. “We don’t use the word eviction now. That’s the term used during the Pol Pot regime. They [NGOs] just use this as a political issue. They don’t speak the truth.”

Instead of referring to villagers as evicted, Mr. Socheat Khemro said the government preferred the term “resettled.”

Agriculture Minister Chan Sa­run, whose ministry is responsible for drafting the contracts for ELCs around the country, said he did not know anything about evictions.

“I don’t know about the evictions,” he said without elaborating.

Still, Mr. Phearum said he feared the number of evictions would rise again once this year’s July 28 national election is over.

“It’s similar to other [election] years,” he said. “The trend since the 1990s is that when there is an important election, the number of evicted families goes down.”