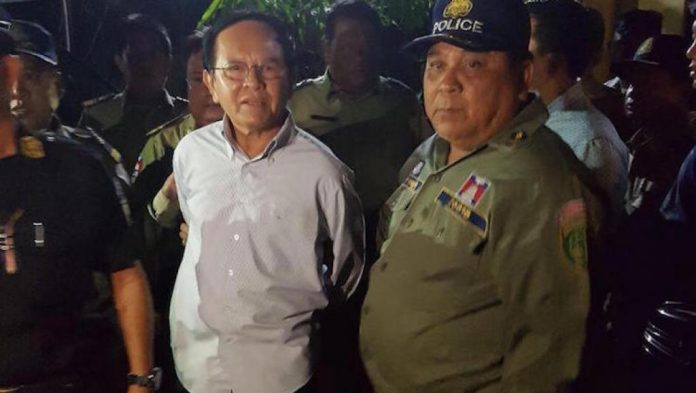 Arrest of CNRP President Sokha Puts Party on the Brink

After hundreds of armed police raided Kem Sokha’s home in the predawn hours on Sunday morning and arrested the opposition leader for alleged treason over a years-old speech, Prime Minister Hun Sen wasted little time warning the only party with a chance of beating his long-ruling CPP in July’s general election of its potential dissolution.

“If the party appears to protect the individual, the party has to be dissolved,” the premier told a packed auditorium of garment workers only hours later at a pre-scheduled event in Phnom Penh, according to government mouthpiece Fresh News.

Mr. Hun Sen has the laws to do it. Earlier this year the CPP rammed through Parliament a package of legislative amendments giving the government and courts sweeping new powers to dissolve its political rivals for breaking any existing laws and added a few vague new offenses, including subversion, for good measure. Mr. Sokha’s snap arrest, though widely condemned as politically motivated, gives him a handy new reason to use them.

But analysts and observers think the CPP is more likely to let the party live, if only to have a still-popular but fatally wounded party to give the elections the thinnest veneer of an actual contest.

“This would be the ideal scenario for the CPP,” said Lee Morgenbesser, a research fellow at Australia’s Griffith University who follows Cambodia closely.

“By persisting in neutered form, the government can point to the existence of a multi-party system on paper, whereby all parties fully conform to the (highly flawed) rule of law,” he said. “The opposition would essentially become irrelevant come election time, meaning it would be only slightly superior to the various minor parties.”

Some analysts suspect the CPP of aiming to postpone the elections. But it will want to keep them, too, said Mr. Morgenbesser, author of “Behind the Facade: Elections Under Authoritarianism in Southeast Asia.”

“The CPP government has far more to gain from holding even highly flawed elections than no elections at all,” he said. “When coupled with some sympathetic election observation groups and the outlawing of protests at Freedom Park, I have little doubt that Hun Sen will get away with it all.”

John Kurlantzick, a Southeast Asia fellow at the Council on Foreign Relations in the U.S., agreed that Cambodia’s strongman was not the type to abandon elections outright.

“It doesn’t really seem like it’s Hun Sen’s style. His style is to push the limits of what’s possible, to amass as much power as possible while still remaining within some formal institutions as much as possible,” he said. “If he was going to cancel or suspend it, why go through the trouble of trying to crush the opposition beforehand?”

Mr. Kurlantzick said the next elections were likely to include the CNRP in some form.

“There is no need to postpone or cancel the elections when you control everything. The Soviet Union had regular elections,” he said. “They were meaningless.”

Mr. Sophal, an associate professor of diplomacy and world affairs at Occidental College in Los Angeles, said elections without the CNRP, or even with a CNRP without Mr. Sokha, would also be “meaningless and totally unfree and unfair.”

Under the amendments the CPP single-handedly pushed through Parliament earlier this year, parties must sever all ties with leaders convicted of a crime carrying jail time or risk death. Long-time opposition figure Sam Rainsy resigned as CNRP president in February, before the amendments even took effect, in hopes of saving the party from his own convictions, also widely seen as politically motivated.

“If [Mr. Sokha] is convicted it means that, like Sam Rainsy, the CNRP can’t be associated with him and he would have to resign,” Mr. Sophal said. “Like everything else in Cambodia, everyone must dance the dance of the ruling party. Dissolving the CNRP isn’t really necessary when it is a neutered party.”

A leaked public opinion poll also suggests that’s all the CPP may want.

Late last year, researchers hired by the CPP asked thousands of Cambodians how their support for the CPP and CNRP would change if, instead of Mr. Rainsy, the opposition were led by Mr. Sokha or neither one of them.

The results were leaked to the media in May. They showed support for the CPP holding steady in any case, hovering between 33 and 35 percent. The CNRP fared worse. Without Mr. Rainsy, who was still leading the CNRP at the time of the poll, support for the opposition party dipped from 44 percent to 42 percent. Without either Mr. Rainsy or Mr. Sokha, it plummeted to 35 percent.

The pollsters did not ask whom people might vote for if there were no CNRP at all.

Political analyst Meas Nee said the CNRP, should it survive to July, could still pull the same level of support it did during the last two elections without Mr. Rainsy or Mr. Sokha. It won a little less than half the popular vote both times.

But with no other parties of consequence to hurt the CPP, the CNRP will need to gain support between now and July to win. And without either towering opposition figure at the helm, Mr. Nee thinks that’s unlikely.

He said whoever replaces Mr. Sokha will be hamstrung by the fear of following him to prison. Some of his top officers and potential heirs have criminal court cases hanging over their own heads already.

With Mr. Sokha behind bars, he said, “the rest of the party will be very careful about what they say.”

Mr. Nee said it was also no coincidence that the state has launched a broadside on the Cambodian media’s few independent voices at the same time.

Over the past two weeks, the government has shut down nearly 20 radio stations carrying content from the opposition and a pair of U.S.-funded outlets often critical of the government, Radio Free Asia and Voice of America, claiming unpaid taxes or broken operating contracts. The Cambodia Daily published its last paper today after being hit with an unaudited tax bill of $6.3 million only a month ago and denied the standard course of appeal.

The CNRP has so far faced the onslaught with reserve—limiting itself to a few critical tweets and Facebook posts—determined to make it to the general elections at all costs. But it has shown an equal measure of confusion. Last week, at the height of the government’s media crackdown, CNRP lawmaker Son Chhay admitted that the party did not know how to respond. On Sunday, CNRP officials issued mixed messages about whether the party would call for protests over Mr. Sokha’s arrest.

Mr. Sophal said that was the last thing the CPP wanted, worried they could spiral dangerously out of control.

But Mr. Nee said the government could use any ensuing violence to impose martial law, as in Thailand, and have another excuse to shut the CNRP down.

For now, he said, the party’s fate was still in the balance.

“Dissolving the party is still a real possibility at this stage,” he said.