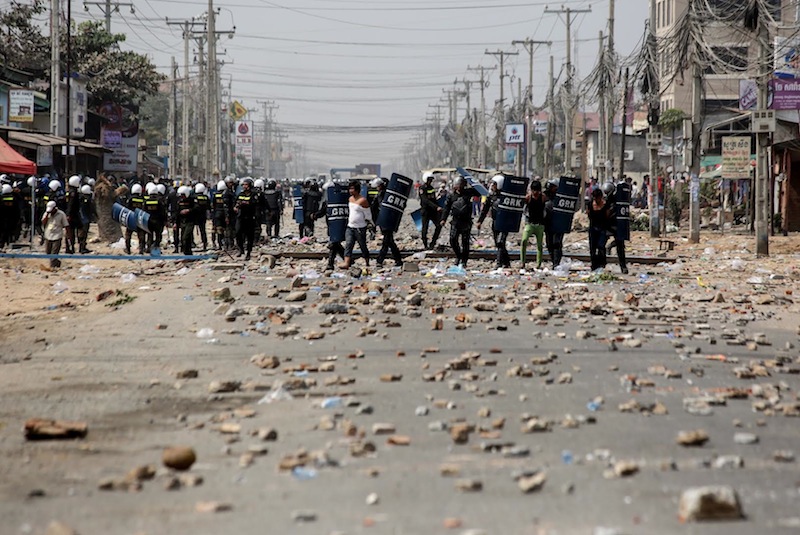 The Appeal Court on Thursday upheld convictions of intentional violence and causing property damage against 13 unionists and workers who were arrested during a riot outside a Phnom Penh industrial park on January 3, 2014, at which military police shot dead at least five people.

The 13 were convicted by the Phnom Penh Municipal Court in March, after what rights groups called a flawed trial, but were immediately set free on suspended jail sentences.

Their appeal hearing was held last week in their absence.

At the courthouse on Thursday— and in the absence of the defendants —Judge Chay Chandaravan announced that the lower court’s decision had been upheld.

“This is an illegal act that caused damage to public property and affected public order,” he added. “There is enough evidence to confirm the victims’ testimony…. The hearing judges cannot believe the answers of the defendants, who said they did not join the demonstration but were only bystanders who were watching.”

The judge did not explain what evidence the court had linking the defendants to the violence.

Am Sam Ath, technical supervisor for rights group Licadho, said on Thursday that the officers made the same admission during the Appeal Court hearing on January 27.

Mr. Sam Ath, who attended the hearing, said the officers also claimed that none of the police or military police who responded to the riot were armed with anything except shields, batons and tear-gas launchers.

At least five garment workers were fatally shot the day of the riot and more than 40 others were injured by bullets. Photographs of the scene show military police firing AK-47s. No evidence to suggest that anyone else was armed has been made public.

Mr. Sam Ath faulted the appeal court for holding the hearing without any of the defendants.

“All their lawyers asked the hearing judges for a delay because they wanted to find their clients to join the hearing, but the judges did not agree,” he said.

“The presiding judge did not give a clear reason for why he did not agree to the delay. He just said that court officials sent a summons to their addresses but they had already moved.”

Contacted after the verdict was announced, Judge Chandaravan declined to comment when asked why the court did not take additional steps to inform the defendants of the hearing, referring the question to court spokesman Toch Pharith, who also declined to comment.

Ros Sorphon, one of the defendants, maintained that he was an innocent bystander on the day of the riot and said he would talk with his lawyers about whether to appeal the case to the Supreme Court.

“I will continue to search for justice because this is very unfair for me,” he said.