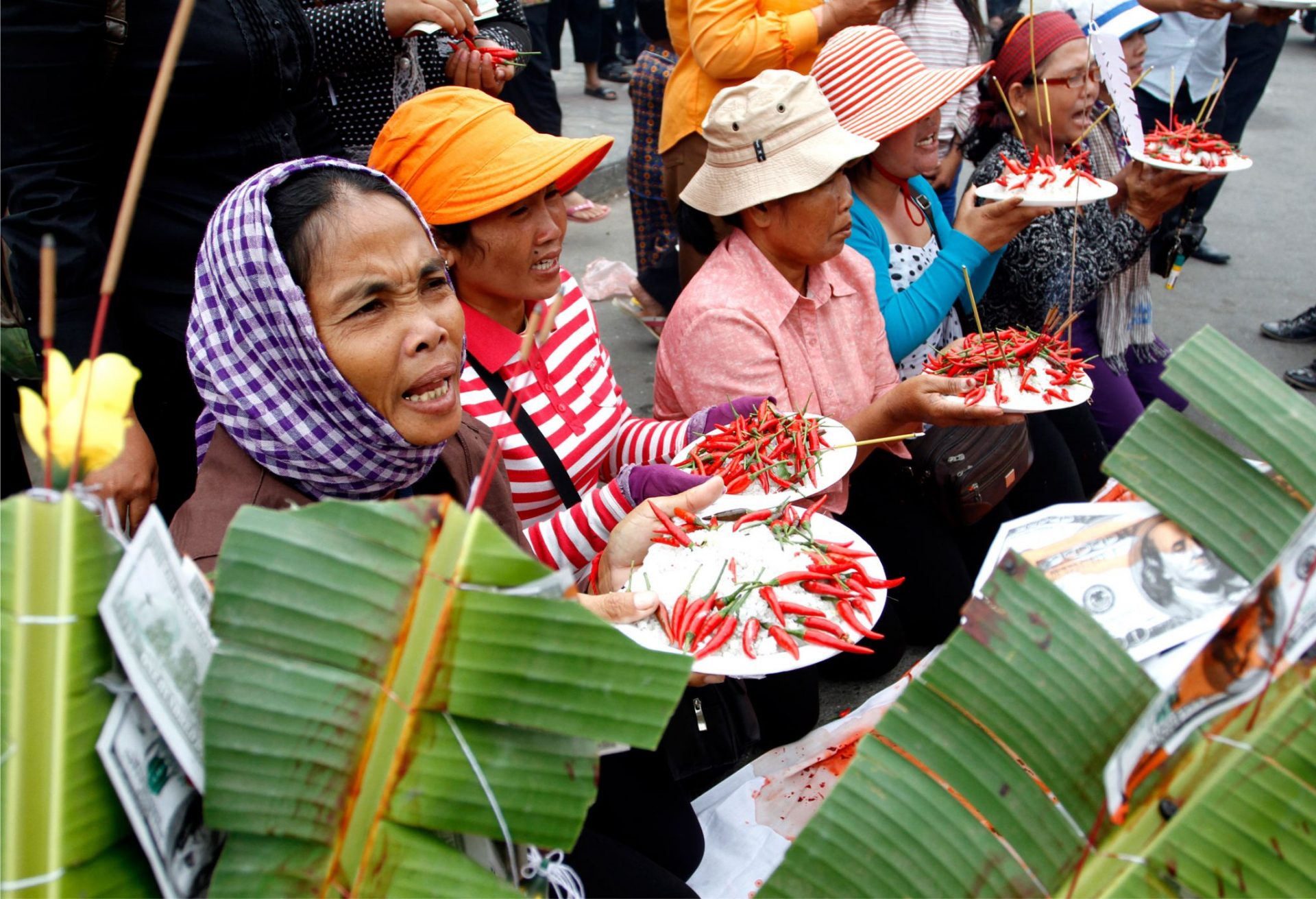 About 50 members of the Boeng Kak, Borei Keila and Thmar Kol communities yesterday gathered to throw chili peppers and salt at the Phnom Penh Municipal Court in an attempt to put a curse on members of the judiciary they say unfairly sentenced anti-eviction activist Yorm Bopha to three years in prison last week.

Ms. Bopha, 29, a Boeng Kak resident and prominent activist, was convicted Thursday for her alleged role in an assault on two motorcycle-taxi drivers in August. Her husband, Luos Sakhorn, was also convicted, but had his three-year sentence suspended.

Ms. Bopha’s lawyer said on Monday that he would appeal the court’s decision, which human rights groups have called an attempt to intimidate dissidents.

At about 9 a.m. yesterday, supporters of Ms. Bopha threw fistfuls of salt and chilis—believed to be the ingredients of a curse—through the front gates of the court before being pushed away from the building by police armed with riot shields. The protesters also burned fake $100 notes splattered with chicken blood to symbolize the harm corrupt court officials inflict.

The communities held a similar ceremony at Wat Phnom on Friday.

“At this time, at this hour, please curse any corrupt prosecutors and judges, so they may melt and disappear forever,” said Boeng Kak resident Heng Mom. “What you have done will come back to you.”

“Why did the court not arrest Chhouk Bundith, who shot and injured three women?” asked Ms. Mom, referring to the former Bavet City governor who was initially the chief suspect in the shooting of three female garment workers during a protest at a special economic zone on February 20.

The Svay Rieng Provincial Court this month dropped all charges against Mr. Bundith, who eyewitnesses say opened fire into the crowd of protesters with a handgun.

Am Sam Ath, technical supervisor at rights group Licadho, said that yesterday’s ceremony was a last resort and a desperate attempt by the Boeng Kak residents to draw attention to Ms. Bopha’s case.

“We hope the Court of Appeal will give them justice, because we observed the trial and there is no evidence to convict Bopha and her husband,” Mr. Sam Ath said.