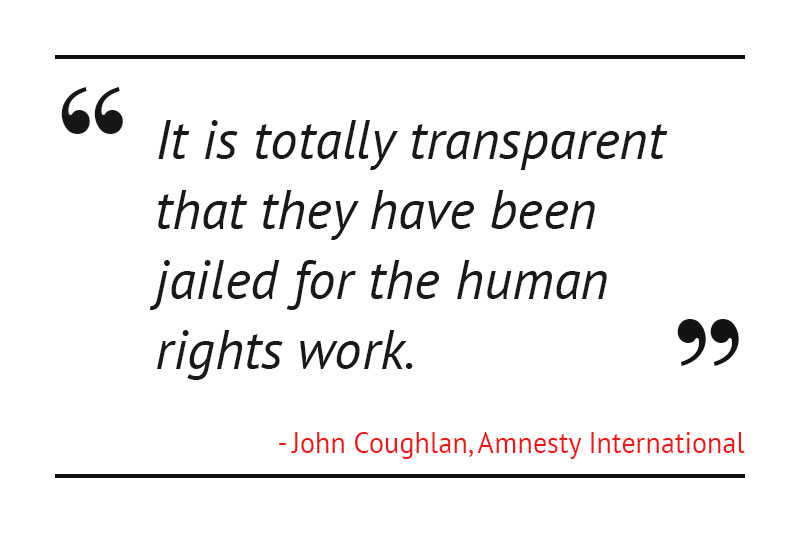 Amnesty International has designated four human rights officers and an election official who were jailed earlier this month as “prisoners of conscience” and will call on millions of members around the world to petition the government for their release.

Previous Cambodians who have been deemed prisoners of conscience—meaning they were jailed for their beliefs or inherent characteristics and have never advocated violence—include land rights advocate Yorm Bopha and activist radio station owner Mam Sonando.

John Coughlan, Amnesty International’s researcher for Cambodia, said on Tuesday that four senior officers from rights group Adhoc and a former officer at the NGO who is now a top official in the National Election Committee had met the criteria.

“It is totally transparent that they have been jailed for the human rights work, for working to uphold the rule of law and supporting victims of human rights violations,” Mr. Coughlan said in an email.

“We have designated them as prisoners of conscience and we will campaign for their release,” he said of the five, who are charged with bribing an alleged mistress of deputy opposition leader Kem Sokha while providing her with legal assistance.

“We’ll be asking Amnesty members around the world—that’s around 7 million people—to write to the Cambodian authorities to call for the immediate and unconditional release of the 5.”

The group of five are among 29 “political prisoners” in Cambodia named by rights group Licadho on its website earlier this month, a list made up mostly of opposition politicians and activists.

Government officials warned Licadho that it could be shut down over the page, arguing that it appeared to violate provisions in the NGO law that require political neutrality. Licadho has pledged to keep the page active and updated.

Justice Ministry spokesman Chin Malin said on Tuesday that Amnesty International was mistaken in claiming that the Adhoc officers were jailed for political reasons. “It was lawful action against individuals for committing a crime. No one can pressure the court to release them.”