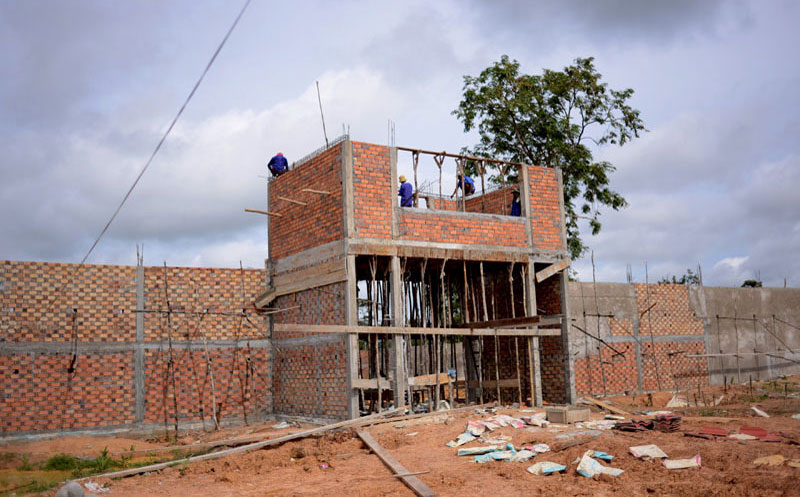 Approximately 120 prisoners, including 16 women and three children, are held in four cells in the Oddar Meanchey provincial police headquarters.

“In one cell we keep 20 or more people,” said a guard at the prison last week. “Yes it’s crowded, because it’s not a real prison.”

“The vast majority are locked in their cells 24 hours a day, including juveniles and infants living in prison with their mother,” she said via email. “The cells are extremely dark and provide very little ventilation. The facility has no health post and no private meeting rooms for lawyers or meeting spaces for families.”

But in December, Kuy Bunsorn, director-general of the General Department of Prisons, announced that help was on the way. The Finance Ministry had committed $700,000 to build two new prisons in Pailin and Oddar Meanchey provinces.

Construction on the new Oddar Meanchey prison began in May—five months behind schedule. There is now an imposing brick and concrete wall surrounding a 70-by-80-meter patch of dirt with a few cells under construction.

Spread around the construction site last week were about 15 workers—prisoners in blue fatigues building the prison in which they will eventually be incarcerated.

Ith Thearoeun, who was digging holes in the earth outside the prison wall to plant trees, said she had no choice but to help build the prison.

“I get nothing and I’m not happy working here, but we have to do it,” she said.

Men Sopheap, another prisoner on the construction crew, said he had only 20 days left in his one-year prison sentence for theft.

But by renting out its prisoners on the cheap to work for a private company contracted to build the prison, provincial authorities are in breach of international conventions ratified by Cambodia.

Phin Yann, the provincial prison director, said on Wednesday that a private company called RV Development was in charge of building the prison, but that he was making decisions about who would work on the new structure.

“We requested to the General Department of Prisons to use the prisoners, because it is our prison,” Mr. Yann said.

“If we do not do it, who is going to do it? We do what we can do. We use only prisoners with light sentences, because we are afraid that those with serious prison sentences would escape,” he added.

Mr. Yann insisted that everything happening under his watch was legitimate. “We do something that is required by law,” he said.

But according to Ms. Critoph at Licadho, the situation of prisoners being used as the labor force to construct the new prison in Oddar Meanchey potentially violates a litany of international obligations.

“Licadho understands that a private sub-contractor was awarded the contract to build the new prison. We believe that, in accordance with ILO recommendations, prisoners should only be required to work for private entities providing they do so voluntarily and provided a number of conditions have been met,” she said.

“They should, for example, have formally consented to undertake the work, they should directly receive wages comparable to those outside prison with similar skills and the working hours and conditions must meet health and safety requirements.”

Apart from there being no health or safety precautions at the construction site in Oddar Meanchey —some prisoners worked without shoes and none were wearing protective equipment—their pay of less than $1 a day is well below the $5 or more a construction worker would make outside prison walls.

Nuth Mala, a guard at the prison, said a group of prisoners left their cramped cells in police headquarters each morning to head to work on the new prison.

“Normally they leave between 7 a.m. and 8 a.m. They have some guards go along with them,” Mr. Mala said, noting that he was also unsure of the legality of the practice.

“[Authorities] should not do this, but if it’s for the state institution, it’s OK. Most of the prisoners have light sentences, so it gives them a chance to work and they can earn some money, but not full payment,” he added.

In a prison van parked outside the entrance to the new prison site, littered with mounds of roof tiles and lengths of metal rebar, guards sat and watched prisoners work. Others sat in deck chairs under the shade of a nearby tree, an AK-47 resting against one of their legs.

One of the guards, who declined to give his name, said the building “is now 50 percent finished” and said that prisoners have also been trucked in from neighboring Banteay Meanchey province to help on the project.

“All the prisoners will be sent back to the police headquarters when they finish their work,” he said.

“We normally use 10 or more prisoners to work as construction workers. All of them have to rotate with other groups—yesterday, some from Banteay Meanchey came to work here,” he said, before reporters were told to leave the site.

Samraong City governor Oun Sopheak said Monday that the company building the Oddar Meanchey prison is “under the charge of Phin Yann,” the prison director, but did not know the company’s name.

“Mr. Yann is in charge of building this prison, so I have no more information about the company,” he said.

Thach Kunthy, the deputy prison director, said he did not know anything about RV Development —the company that Mr. Yann said was contracted to construct the new compound.

But he was sure that Mr. Yann “is the one who is in charge of providing payment to the prisoners.”

“We asked them: ‘Who volunteers to work?’ If they are not willing to work, we don’t use them,” he said.

“We promise to give some payment.”