Farmers usually consider themselves lucky to till fertile soil. In Cambodia, however, such land often signifies danger rather than abundance. When America dropped an estimated 1.8m tonnes of explosives on the country during the Vietnam war, those falling on flinty ground generally detonated, whereas many landing on softer earth did not. No one knows how many bombs remain in rich soil. But a paper by four academics at Ohio State University (OSU), who studied satellite images and reports by landmine-removal groups from a single village, found that perhaps half of the munitions have not exploded.

These wartime remnants have given the United States’ bombing campaign of 1965-73—which ostensibly targeted Viet Cong supply lines, but caused perhaps 150,000 deaths—an enduringly lethal legacy. Since 1979, unexploded ordnance has killed at least 19,000 people in Cambodia (though some may have been blown up by landmines from subsequent wars, rather than by American bombs). Cambodia now has the world’s highest rate of amputees.

A recent study by Erin Lin, one of the OSU researchers, shows that America’s bombardment injured not just Cambodia’s people but its economy as well. She first interviewed farmers in the country, who said they thought that richer, darker soil presented an unusually high risk of hidden ordnance—especially in heavily bombed areas. They work in constant fear of explosions. Some said that they only planted crops in parts of their farms that they were confident contained no bombs, or that they used hand tools instead of machines to reduce the risk of detonation. 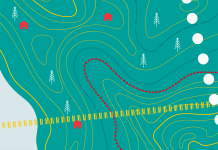