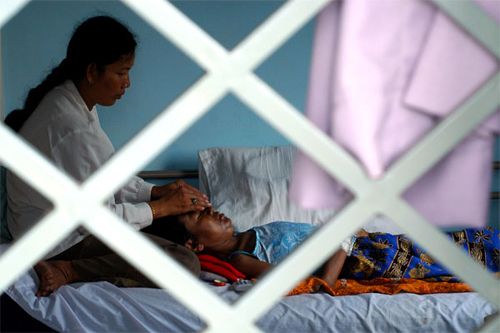 He is the first patient I see and he has the eyes of death. It’s my initial foray with Brahmavihara, the small Buddhist NGO who’s invited me here to help them raise awareness about the Cambodian AIDS crisis, the worst and least funded in South East Asia. I have no idea what I’m doing, but I’m in it now, flung into the orbit of this man’s suffering, almost ashamed to be holding a camera. There is a nagging unseemliness about photographing suffering — the Vulture Effect — despite knowing you’re there to help. By showing suffering, by showing the compassionate action of selfless individuals working tirelessly to alleviate it, perhaps it will move others to compassionate actions of their own.

I’m here at the Maryknoll hospice with two remarkable women. Lok Yay, (‘revered grandmother’ in Khmer), a 75-year old wisp of a Buddhist nun who is well known around the AIDS wards of Phnom Penh. Beth Goldring is an American Buddhist nun and founding director of Brahmavihara. She began her AIDS project chaplaincy in 2000 on the most frayed of shoestrings, before anti-retroviral (ARVs) medications had made it into the country and the death rate was virtually 100%.