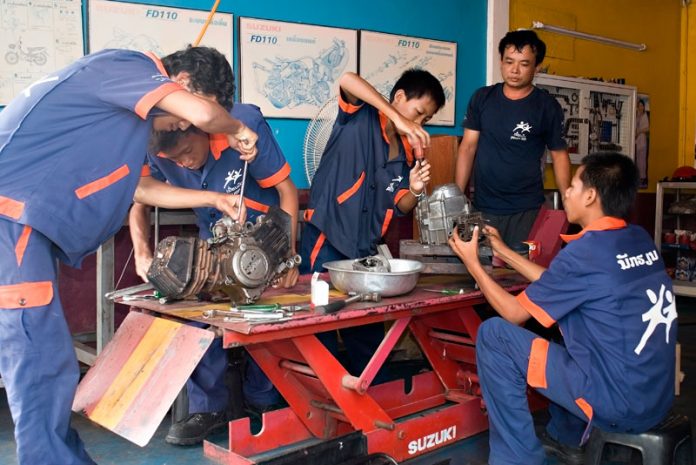 Sebastien Marot had expected Cambodia to only be a stopover on his way to Japan when he first landed in Phnom Penh in 1994.

As a young man, he was posted at the French Embassy in Japan during his mandatory national service. Later he worked briefly for a Japanese broadcasting network, and then spent three years in sales and marketing at the French cosmetics giant L’Oreal in Paris.

Missing Asia, especially Japan, Mr. Marot decided to return. But first he would make a visit to Cambodia, a country that had been much in the news since the signing of the Paris Peace Agreement in 1991. The sight of street children sleeping on sheets of cardboard near Central Market made him change his plans.

How could there been such poverty in Cambodia, he wondered, after scores of countries had spent billions on the United Nations Transitional Authority in Cambodia (Untac), which organized the 1993 election, and there were still huge development programs and a plethora of NGOs and international organizations in Phnom Penh.

“Rebuilding a country without ‘rebuilding’ the kids made no sense to me: It seemed an unspeakable waste,” Mr. Marot said.

Mr. Marot and a group of foreign friends pooled their resources so he could open a modest shelter for street children and set up a class to give them a basic education.

“I thought I would stay here three months, then turn this over to Cambodians and leave for Japan,” he said. But there was always more to do and so he never left.

Today, he is executive director of Friends-International, the regional arm of Mith Samlanh (‘close friend’ in Khmer), the organization he launched in Phnom Penh two decades ago.

Map Somaya, the first Cambodian to work as a volunteer at the organization in the 1990s, is now the program director for Mith Samlanh. As she explained, the organization’s goal has always been to create a safe environment for street children and teenagers while giving them training so they can have better lives. This has meant providing the homeless and very poor with basic services, ranging from simple healthcare to helping them find shelter, and setting up education programs so children can catch up with school and teenagers can acquire a trade.

In Phnom Penh, Mith Samlanh’s staff in the field and at their center on Street 13 work with 1,500 to 1,800 young people per day, which often involves dealing with their families and siblings as well, Ms. Somaya said.
Friends now has a center in Siem Reap City called Kaliyan Mith, or ‘good friend,’ and runs programs in other parts of the country in cooperation with organizations such as Mlop Tapaang in Sihanoukville, for whom Friends operates the restaurant Sandan as a training center.

The idea of setting up a restaurant training center for street children came from German chef Gustav Auer who, coming to Mith Samlanh as a volunteer in 2000, concluded that the small number of international eateries in Phnom Penh at the time would make it feasible to launch a restaurant where students would train as chefs or in customer service and management, he said.

However, launching Friends The Restaurant was a challenge, Mr. Auer recalled. “We had a very small budget, so we bought everything second-hand: second-hand furniture, second-hand fridge, and everything broke down.” It also was difficult to find basic equipment such as stainless steel counters since goods and products available in Cambodia at the time were rather limited, he said.

When the restaurant initially opened in February 2001 with teams of teachers and students to handle each task, it proved difficult to attract customers as people were conjuring a bleak image of being served by poor kids in a place run by an NGO, Mr. Auer said. But Friends The Restaurant was soon a success, which led Mith Samlanh to open another eatery, Romdeng, with an all-Khmer menu.

Training students often involves much more than just restaurant service skills, said Sao Sokunthy, a former Mith Samlanh student now in charge of service training at all Friends-International restaurants. When young people have had to fare for themselves on the street, living more or less outside of society, they often need to learn everything from reading and writing Khmer to learning to respect teachers, she said.

Moreover, since today’s young people can easily make money on the street by selling newspapers and flowers, begging, or dealing in drugs, it’s not always easy to convince them to spend at least a year training for a job in a restaurant, Ms. Sokunthy said.

“We have to change the young person’s mind…to show them a future, how to think ahead, not to think from one day to the next,” Mr. Auer explained. “When you’re poor, you don’t have the luxury to think one year ahead. You’re just happy to have rice for the next day. So it’s a very challenging thing to do, to make them understand.”

Still, Friends has trained more than 1,500 young people since launching its restaurant training program, and all the graduates have found employment, he said.

The training restaurant Makphet was launched in 2006 in Vientiane. It was part of Friends’ program set up in Laos at the request of the Lao government, which was concerned by the increasing number of children on the streets, Mr. Marot said. A second restaurant is scheduled to open later this year in Luang Prabang. Another one is due to open in Bangkok as an extension of Friends’ programs in Thailand.

In the 2000s, Friends received funding to look into child trafficking in Bangkok, where it was believed Cambodian children were being used for child prostitution and begging, Mr. Marot said. “We went to work with this concept of child trafficking on the streets of Bangkok. And for months, we searched and searched to uncover trafficking but kept finding nothing,” he said.

Such trafficking may have existed 15 years ago, but no longer: Today, Cambodian children and teenagers migrate voluntarily with or without their families in the hope of making money in Thailand, where they risk being exploited, he said. “Using today this old concept [of trafficking] would make us focus on the wrong issue and come up with the wrong response,” Mr. Marot said.

So, switching gears, Friends developed programs for child immigrants, setting up a center on the Thai side of the border at Poipet and working with Thai authorities in prisons where illegal immigrants are sent.

Friends’ Thailand has teams of workers who speak Khmer and Lao so they can communicate with the youngsters and prepare their repatriation, which is the best outcome for them, Mr. Marot said. This involves tracking down their families and making sure the children will be in a safe environment when they return to

Cambodia, a task that can only be accomplished by working in cooperation with other organizations, he said.
Friends also runs the program Peuan Peuan for Thai street children in Bangkok and is about to launch a full program in Burma.

In addition, the organization became involved in Indonesia following the 2004 tsunami and now runs a program in Jakarta, where it is developing emergency responses for the mega city, where even street kids have mobile phones.

Services for emergencies, which may range from a woman about to give birth on the street to children being physically or sexually abused, must be tailored to each region, explained Sebastien Le Mouellic, Friends’ coordinator for the CYTI Alliance—a group of organizations with similar goals in Cambodia, Egypt, Honduras and six other countries.

In Cambodia, there must be a hotline and staff on standby at several locations to ensure a quick response, he said, while in Jakarta, one can start helping through mobile phones and other devices that even street people tend to have.

Adapting responses not only to areas but also to social change over time is one of the biggest challenges that Friends faces, Ms. Somaya of Mith Samlanh said. In the past, Phnom Penh’s homeless and street children lived downtown on empty lots and in squatter areas, she said. But as development took off in the center of the city, they moved to the outskirts. Mith Samlanh is now setting up centers in the suburbs and will offer training programs at some of those locations.

Operating on a regional basis is also part of this adaptation process since development in the region, which will include new road and railway networks, is prone to boost migration of the poor and young people looking for work, leading to drug and other forms of trafficking, Mr. Marot said.

Friends’ ChildSafe campaign is now conducted in four countries and will soon be launched in the Philippines at the government’s request. This program involves working with hotels and the tourism industry as well as tuk-tuk drivers and the local authorities to prevent sexual and other abuse of children.

In Cambodia, Friends has also launched a campaign to make tourists aware that some orphanages use children as excuses to raise money, opening their premises to visitors as if the children were exhibits to be toured. The lack of visitor screening at those institutions not only exposes children to potential child abusers, but is prone to disrupt children’s emotional balance by having them constantly meeting with strangers, Mr. Marot said.

Getting enough funds to care for the poorest children has been far from being easy. In the early years, Mr. Marot did translations and other jobs at night to keep Friends going. He remembers one Friday night in 1996 when he announced at a staff meeting that he was about to drop the project due to a lack of funds. But the following Monday, a call came in: Friends had been approved by Australia’s AusAid for a grant, he said. Unicef and other organizations soon followed suit.

Over the years, Friends has accumulated a number of awards, including the Order of Australia for Service to Humanity in 2002; the Gold Medal of the Cambodian Government for the Reconstruction of the Country in 2005; and the Arab Gulf Fund Award for Fighting the Phenomenon of Street Children last year.

“It’s the kids who make this all worthwhile,” Mr. Marot added. “When the kids pull through…when they get jobs, when one in a restaurant discreetly comes to say hello, that really feels great.”