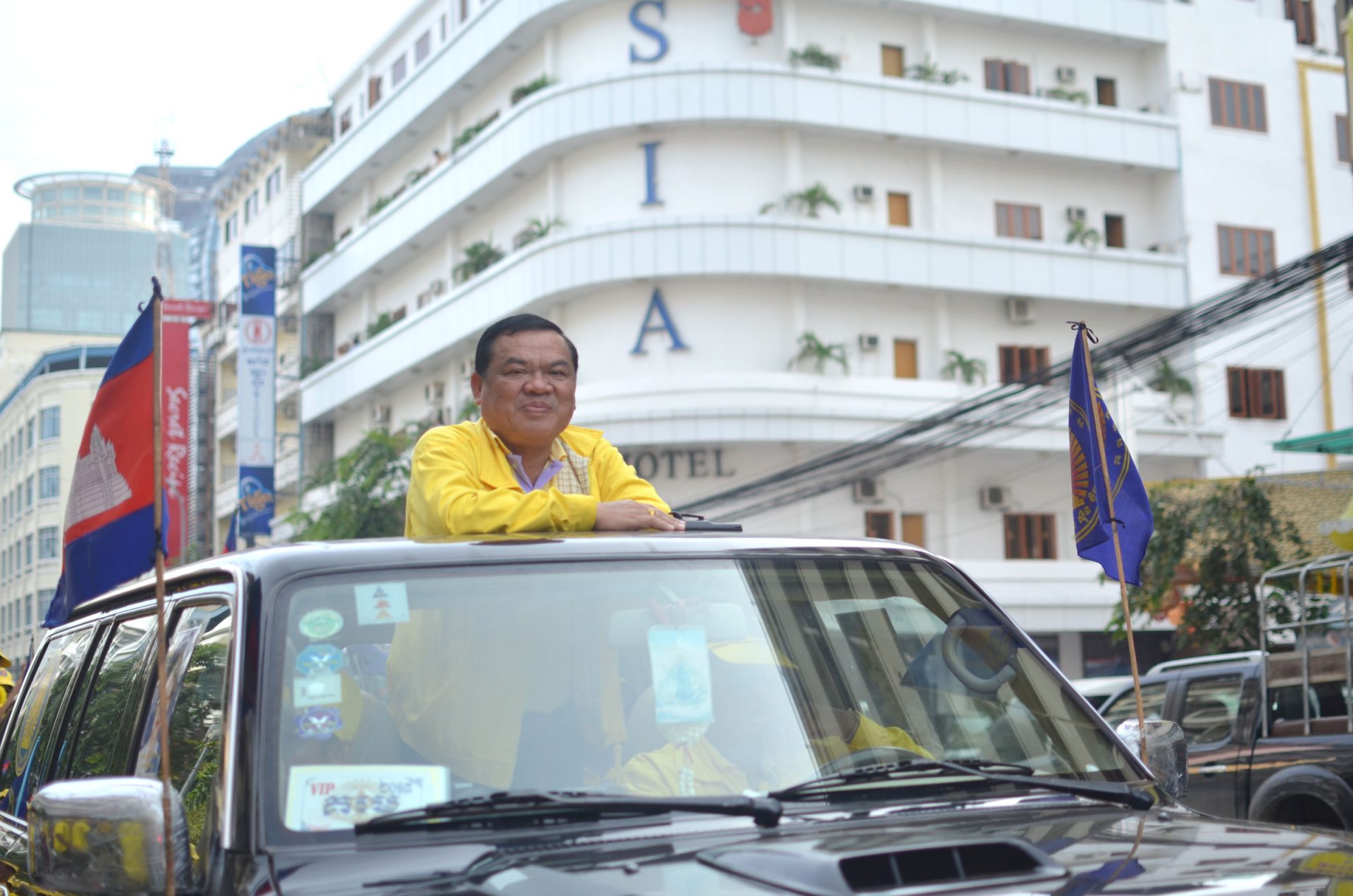 It’s been a rough two decades for the Funcinpec party.

Formed in 1981 by then-exiled Norodom Sihanouk, the royalist party headed by Prince Norodom Ranariddh, Sihanouk’s son, won the country’s first democratic elections in 1993 but was made to share power with the CPP and then-Second Prime Minister Hun Sen.

Four years later, Funcinpec troops lost a fierce battle on the streets of Phnom Penh to forces loyal to Mr. Hun Sen, leading to the ouster of Prince Ranariddh as first prime minister. The CPP won the 1998 elections comfortably, winning 64 seats to Funcinpec’s 43.

In each election since then, Funcinpec has seen a dip in its popularity among the Cambodian people. The biggest blow came in the last national election, when the party lost 24 of the 26 seats it held in Parliament.

But Funcinpec is still breathing.

Embarking on a pre-election campaign rally in Phnom Penh on Wednesday, thousands of supporters dressed in yellow and royal blue turned out to parade through the city.

The crowd included hundreds of graying royalists, who were joined by an equal number of younger voters, almost all of whom said they were throwing their support behind Funcinpec out of their adoration for the late King Father Norodom Sihanouk and reverence for the monarchy.

“Funcinpec has brought everything to the country, from its anthem to its flag,” said Touch Kimheng, the deputy governor of Russei Keo district, who said he has been a loyal member of the party since 1993. “Funcinpec will never die,” he added.

Still, the party has encountered its fair share of drama over the years. In 2006, Prince Ranariddh was ousted as Funcinpec party leader and launched an eponymously named party that won two National Assembly seats in the 2008 elections. The royalists were once again merged earlier this year under the Funcinpec banner.

With Prince Ranariddh having stepped out of politics, Princess Nor­o­dom Arunrasmey, the 57-year-old daughter of the late King Father and Cambodia’s former ambassador to Malaysia, became the new face of the party after being voted in as Funcinpec’s candidate for prime minister at the party’s congress in May.

However, much of the power in the party continues to be held by its secretary-general, Nhiek Bun Chhay, who led royalist forces during factional fighting in 1997 against troops loyal to Mr. Hun Sen. Today, Mr. Bun Chhay is an unfailing ally of Mr. Hun Sen as a member of Parliament and deputy prime minister.

Having once represented the greatest challenge to the power of Mr. Hun Sen and the CPP, much has changed within Funcinpec over the past 16 years.

According to Sisowath Sirirath, a founding member of Funcinpec and former Cambodian ambassador to the U.N. during then-Prince Si­hanouk’s Sangkum Reastr Niyum re­gime in the 1950s and 1960s, Funcinpec is now a party divided.

“There is a division within our party,” Mr. Sirirath said at Wednesday’s rally, donning a faded yellow shirt emblazoned with the Funcinpec logo.

Mr. Bun Chhay said that the royalist party has worked alongside the ruling party in order to unite the country and deserved due credit for the development that has happened over the past decade under the coalition government.

“The important thing is that Funcinpec cooperates with the CPP to keep peace, since we can only do our work if there is peace. It is due to peace and stability that millions of tourists have come [to Cambodia] and investors have come to create work for everyone,” he added.

But according to Prince Sisowath Thomico, who left Funcinpec to join the Cambodia National Rescue Party earlier this year, Funcinpec’s complicity with—and subservience to—the ruling party has stripped the par­ty of its importance as an inde­pen­dent voice in Cambodian politics.

He also said the party’s cozy rapport with the CPP has disillusioned supporters of the late King Father, who was unafraid to speak out against decisions made Mr. Hun Sen’s regime.

“Funcinpec has never tried to stop land grabbing and so on. Funcinpec never tries to stop the expelling of people from their homes. I haven’t seen any members of Funcinpec protesting over problems in Boeng Kak and Borei Keila in Phnom Penh. That is why Funcinpec has lost so many votes in the last twenty years,” he said. “There is no future for the Funcinpec party as long as it is aligned with the CPP,” he added.

Whatever role Funcinpec takes on today, much of the current de­vel­opment and stability often touted by the CPP was made possible through efforts led by Funcinpec in the 1980s and early 1990s, which eventually led to the signing of the Paris Peace Accords in 1991 and opened the country to the international community, said Princess Arunrasmy.

“In the early 1990s, Funcinpec was leading. When the King Father formed Funcinpec, we took the lead in peace negotiations. When the first elections took place, we won because people understood that we led the reconciliation process in the 1980s,” Princess Arunrasmy said.

“The second Kingdom that many people now enjoy is thanks to the par­ticipation of Funcinpec along with the Cambodian people,” she said. “Just because we only have two seats to work with does not mean that we have given up hope. My appeal to the people is to give us a chance so we can do more for the people. I’m not talking about winning. Winning would be a daydream. We are building from scratch now,” she said.