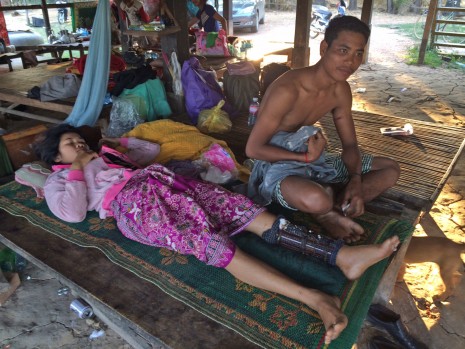 KOMPONG THOM PROVINCE – Uy Hap, the chief of Choam village, is keeping a list in his notebook of the people who were killed and injured by the grenade attack on a wedding party Saturday night.

There were too many people killed and maimed for him to remember all without taking notes.

Mr. Hap recorded the 10th death Tuesday: Keo Poeun, 50, who had been in critical condition at the 515 Kompong Thom health clinic, succumbed to brain injuries on Monday night. Her son, husband and brother were all killed by the grenade attack on the wedding party.

Speaking in front of his thatched-roof home Tuesday morning, with the sound of funeral music drifting across the village, Mr. Hap also added another name to the list of injured: “Morn Sim, female”—bringing the total to 37, almost half of whom were under 18.

“I am scared,” he confided. “The whole village is scared.”

What was supposed to be a joyous week in this poor, rice-growing town in Prasat Sambor district ended up filled with devastation.

At 10:30 p.m. on Saturday, the night before Chea Chork, 22, and Phoeun Sophal, 20, were set to be married, a grenade was thrown onto the tent where about 100 friends and family were dancing in celebration.

The grenade exploded above the heads of the guests, raining down fire and red-hot shrapnel.

“After the grenade exploded, people panicked and started to fall over,” said Men Ra, 35, a villager who was at the pre-wedding party. “No one else could help anyone else. It was chaos. There was blood everywhere.”

The blast radius of the explosion from the Chinese-made grenade was about as wide as the wedding tent on which it landed, but the repercussions have been felt throughout the province.

Khoeun Cheng, 24, who lives about 30 km away in Srayov village, lost her niece in the blast. Then her husband, Khoem Dara, 22, was arrested Sunday morning for his suspected involvement in the attack.

Ms. Cheng said that she was sleeping with her husband in their one-room thatched house when police grabbed Mr. Dara and took him away, along with their Korean-made Daelim motorbike, which she said was worth about $80, and their only mobile phone.

“When they arrested him they said it was something about a stolen bike. Then when he got to the police station they said he’s involved in the grenade attack,” she said. “We have been together for seven years. We were together on the night of [January] 26. I want them to…release my husband.”

The week before the grenade attack, Ms. Cheng and Mr. Dara, along with their 2-year-old daughter, spent about four days in Choam village with Ms. Cheng’s brother, Khoeun Khon, a farmer who makes coal in his backyard. Mr. Khon told his sister she could earn some extra money gathering wood around his house, a crude hut on the edge of the village.

On the night of January 23, the family was woken up by three young men, relatives of Mr. Khon, who wanted to drink palm wine. Mr. Dara declined to join them, and one of the men, Mr. Chork, the groom, allegedly punched him in the face.

“I wanted him to drink some palm wine and he didn’t so I beat him,” Mr. Chork said on Monday, sitting next to Ms. Sophal, his bride-to-be. Both survived the deadly blast.

Recovering under the house of a traditional healer a few kilometers from his home, Mr. Chork, a well-built young man with a reputation in the village for drinking and carousing, had stitches in his shoulder to close a shrapnel wound.

Ms. Sophal, lying next to him, had a cast on her leg, which was fractured by the grenade blast. She was still wearing long, bright red, fake fingernails from the celebration on Saturday night.

Mr. Dara, a slight man with a boyish face, swears it wasn’t him.

“I don’t know why they arrested me,” he said on Monday, standing in his jail cell, still wearing the baggy sweatshirt and jeans he was wearing when he was arrested. “I didn’t do it.”

Ms. Cheng and 51 of her neighbors signed a petition stating that Mr. Dara was in Srayov village on the night of the grenade attack. Tech Leng, deputy village chief, passed it on to Kompong Thom’s provincial governor Monday evening.

“We arrested this suspect [Mr. Dara] because his bike was seen [at the scene] and he fought with the groom a few days before the incident,” Mr. Sopheng said.

A local policeman who was on patrol in a nearby commune also said he saw Mr. Dara driving back home on his Daelim after the attack, Mr. Sopheng said.

Mr. Dara will be sent to court today, as police continue to search for three more suspects in the attack, he added.

Khin Chet, 12, was taking care of his baby sister outside the wedding tent when the grenade exploded.

He said that, as he turned to rock his sister in a hammock, he saw two men stop their black Honda Dream motorbikes about 15 meters from the tent. One of the men got off his bike, took a few steps forward, and threw something.

“I didn’t know it was a grenade until it exploded,” Chet said. “Then they got back on their bikes and drove away in different directions.”

San Sim, 38, was among dozens of villagers gathered under their houses in Choam village Tuesday, trying to make sense of what had happened to their loved ones.

“In some houses, two or three people died,” she said. “We are all in the dark now.”