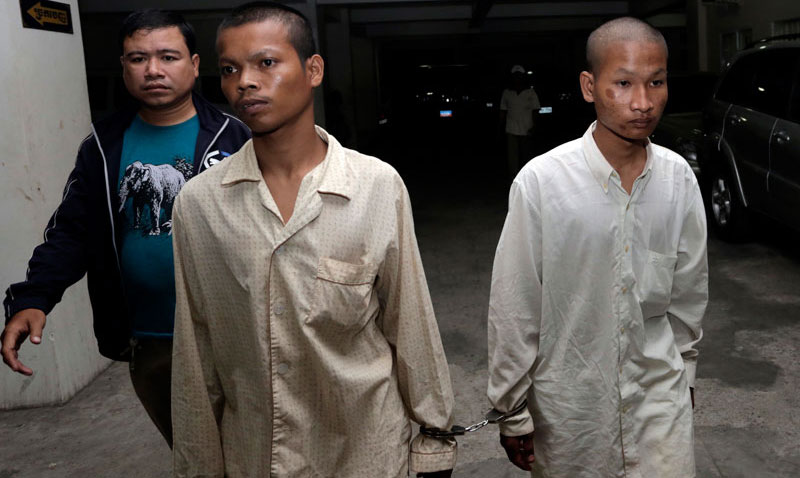 Seang Sovannara, the chief monk at Wat Samakki Raingsey, has not left the grounds of his pagoda for the best part of a week.

Since activist monk Soeung Hai was arrested and defrocked for protesting peacefully outside City Hall on Tuesday, Wat Samakki Raingsey, a popular residence for dissident monks and a magnet for marginal­ized communities, has been under surveillance.

“When I wake up in the morning, usually about 4 a.m., the police and military police are already moving into position to stand guard at the entrance to the pagoda,” Seang Sovannara said from inside his dark dormitory on Friday.

“They are here to watch our movements, to monitor who comes and goes, and to stop people from joining protests in the city,” he said.

In addition to Mr. Hai, who was sentenced on Wednesday to a year in prison for obstructing public officials, two more monks—Thach Sang, 19, and Khit Vannak, 20—have also been arrested and defrocked in the past week.

Mr. Sang and Mr. Vannak were apprehended while carrying Cambodian and Buddhist flags from Wat Stung Meanchey to Wat Samakki Raingsey, where a displaced community from Preah Vihear province was waiting to receive the flags and march into Phnom Penh to bring attention to their battle to keep their land.

The courts charged the two flag carriers with joining a “criminal association,” a crime that carries a maximum jail term of five years. The pair is in Prey Sar prison awaiting their trial.

“These arrests are a worry,” Seang Sovannara said, “because I have heard that the authorities are very interested in arresting me and my deputy, [Thach Ha] Sam Ang.”

“They know that if they arrest us, the leaders, then our monks will not be organized.”

Photos of Mr. Hai wailing and wearing civilian clothes were circulated on social media following his arrest and defrocking, a process that is supposed to be undertaken with the oversight of senior members of the Buddhist clergy.

But Buntenh, head of the In­dependent Monk Network for Social Justice, said Friday that the defrocking of the three monks had not been done in accordance with Buddhist doctrine.

“If a monk does wrong, there is a process that we must go through,” he said. “It has been the same for many, many generations.”

But Buntenh said that, according to Buddhist doctrine, if a monk is thought to have broken the law, the authorities should inform the ecclesiastic hierarchy, who would then summon the monk in question and have him explain himself.

“If the Ministry of Cult and Re­ligion decides that the monk has committed wrong according to the law, then they will allow the monk to be defrocked,” he said. “But po­lice do not have the authority to arrest and defrock a monk before this process.”

At Wat Samakki Raingsey, Seang Sovannara said that monks living in or affiliated with his pagoda were often given the cold shoulder by the ecclesiastic hierarchy. The abbot said that he had no confidence that there was anyone he could reach out to in the event of a violation of doctrine.

“[Great] Supreme Patriarch Tep Vong has never helped us before,” he said, referring to the chief of the country’s Mohanikaya Buddhism sect, who is also a former CPP parliamentarian. “The Ministry of Cults and Religion does not care about Kampuchea Krom monks.”

“The only ones we can call when there is a violation are NGOs and journalists.”

Khim Sorn, chief of the Moha­nikaya sect’s secretariat, said that monks affiliated with Wat Samakki Raingsey acted “independently” of the monkhood’s doctrine and were therefore not afforded the same privileges as their peers at more obedient pagodas.

He said that the pagoda’s split from the clergy goes back to 2010, when the pagoda’s founder, Yoeung Sin, passed away.

“When the former chief monk was still alive, I used to meditate in this pagoda and lead the monks there to respect the Buddhist doctrine,” Khim Sorn said.

When Yoeung Sin died, he said, the monks at the pagoda refused to let the clergy appoint a new chief monk, instead choosing among themselves.

“Since that time, Wat Samakki Raingsey has operated separately from Cambodian monk authorities because they do not allow us to regulate them,” Khim Sorn said. “They want to operate independently so they don’t need the au­thorities to help them.”

Khim Sorn said that Buddhist doctrine dictates that a monk can only be defrocked with the blessing of the chief of his pagoda, which he said took place in all three cases this week.

“In this case, the monk chief at Stung Meanchey pagoda joined other monk authorities to defrock them,” he said.

However, Thai Buntheoun, the chief monk at Wat Stung Mean­chey, said that was not the case.

“I did not join the defrocking of those monks,” he said, referring further questions to the Ministry of Cults and Religion.

Seng Somony, spokesman for the ministry, said that protocol had been followed.

“Before authorities sent them to court, they had permission from monk authorities to defrock them,” he said. “They broke government rules, therefore they cannot remain in the monkhood.”

Back at Wat Samakki Raingsey, Seang Sovannara said he was fearful that his turn to be arrested and defrocked was not far away.

“The high-ranking monks have never called me in person to ask me anything about activists at the pagoda,” he said. “But recently I have been getting phone calls where people threaten me: ‘If you don’t make it stop, you will be arrested.’”

He said that with police watching his pagoda closely, monks were afraid they could be arrested if they ventured outside the pagoda grounds alone on in small groups.

“We will not stop our social work,” he said. “When we leave, we just need to go in large groups. They dare not stop us if we are many.”

And if things do get too hot outside the pagoda, he will instruct his monks to remain inside, where he believes they will be out of the law’s reach.

“Police and military police can not come inside the pagoda; if they do, we will dismiss them,” he said.