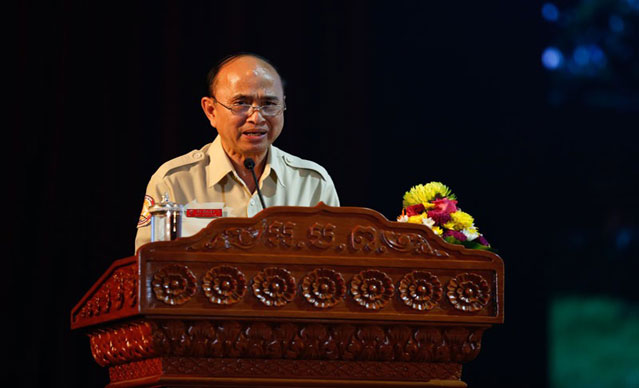 Cambodia’s corruption czar was again on the defensive on Tuesday about the government’s controversial decision not to prosecute the former head of the National Malaria Center over revelations that he took hundreds of thousands of dollars in bribes to secure million-dollar mosquito net contracts for a pair of firms.

Anti-Corruption Unit (ACU) chairman Om Yentieng even went so far as to describe the outside investigation exposing the payoffs as a human rights violation.

The bribes were revealed in late 2013 by the Geneva-based Global Fund to Fight AIDS, Tuberculosis and Malaria, whose $12 million in grants were misspent by ex-Malaria Center director Duong Socheat, who resigned in mid-2011.

At a corruption-themed talk with Mr. Yentieng on Tuesday hosted by the European Chamber of Commerce in Cambodia, German Ambassador Joachim Baron von Marschall said German firms had told him “time and again” that bribes and corruption simply made it too risky to invest in Cambodia.

The ambassador said Germany was a major Global Fund donor and that Mr. Socheat’s prosecution seemed “obvious.” He said taking people like Mr. Socheat to court was key to preventing corruption from scaring off investors.

“Eventually, the money that these persons had asked for in bribes, or had received through embezzlement, were recovered,” Mr. Baron von Marschall said. “But what to my knowledge has not happened, even though this to me would seem obvious: No criminal law prosecution has been brought against them.”

“It seems to me that it is very important that those who commit corruptive acts do not just get a punishment by having to pay back their money. That is not punishment enough,” he said. “It is important that the full force of the criminal law is also being brought against them, no matter what position they hold or what importance they have in the system.”

The ACU has repeatedly defended its decision not to pursue charges against Mr. Socheat. On Tuesday, Mr. Yentieng offered the most detailed explanation yet of this position.

The ACU chairman conceded that Mr. Socheat took money from the firms that he should not have. But he said it was the firms that offered the money, as a kind of reward for the Malaria Center having run a smooth and speedy bidding process.

“[The firm] asked, ‘What do you need, or do you have a mission to the provinces?’” Mr. Yentieng said, recalling the back-and-forth. “Then [Mr. Socheat] said, ‘Yeah, I will go to distribute mosquito nets for malaria, and I am helping to build a school’…. So the company replied, ‘I will give you $20,000.’”

But Mr. Yentieng said the money could not have been a bribe because Mr. Socheat, despite being head of the Malaria Center at the time, actually had no control over who won the bids.

“He had no right to make decisions in this case, so he’s not guilty,” Mr. Yentieng said. “Bribe giving and bribe taking means that you give money to this person in exchange for receiving a benefit. Therefore, when the director has no right to decide on the bidding, it’s a mistake to take a legal path.”

Mr. Yentieng also claimed the ACU could not have used the Anti-Corruption Law to go after the director because the legislation only took effect in November 2011, after the payments. And an earlier law enacted under Untac, the U.N.’s mission in Cambodia in the early 1990s, did not cover misappropriation—supposedly Mr. Socheat’s actual offense.

“According to the law, his offense is misappropriation, meaning that he accepted things he should not have accepted. So we decided to use the Untac criminal law, which has three articles about corruption but nothing about misappropriation. It only talks about taking bribes,” he said.

Mr. Yentieng said the director only ever admitted to taking $20,000 from the firms, a fraction of the $351,000 the Global Fund has pinned on him. The chairman said the ACU scoured his official asset declarations, probed nearly 40 bank accounts linked to him or his relatives, and even pursued claims that he flew to Bangkok to take payments, but found nothing amiss.

“So I say again and again that we acted in compliance with the law,” he said.

Mr. Yentieng did not say how much of the $351,000 Mr. Socheat eventually paid back. But he said the money trail was so faint that had better lawyers been defending Mr. Socheat, the Global Fund would not have been repaid “even a penny.”

The ACU chairman even faulted the Global Fund for having mistreated Mr. Socheat when its investigators showed up at his office searching for records.

“It threatened to cut aid if he refused to hand them over. So Mr. Socheat printed everything, except from one computer that belonged to an Australian woman working for the United Nations. Then the Global Fund forced him to write a letter explaining why he refused to switch on that computer so they could copy documents,” he said.

“First, you [Global Fund] violate human rights. Second, you have no power to do so.”

Wrapping up, Mr. Yentieng said he was so exasperated by the lingering perception that the ACU was protecting Mr. Socheat that he might at some point reveal even more details about the case that would leave the Global Fund thoroughly embarrassed.

“One day, when I can no longer bear it, I will publicly release a statement and [the Global Fund] will say I took their pants off,” he said.

“If we just follow your suggestion to arrest and imprison him,” he added, addressing the German ambassador, “we would not be human beings because we would not be following the law.”

But Mr. Baron von Marschall did not leave the talk thoroughly convinced that the ACU had done the right thing.

“It made clear to me that it is probably more complex than I had previously thought,” he said after the event.

The Global Fund has declined to make public its opinion of the ACU’s decision not to prosecute Mr. Socheat. But the ambassador said he believed the aid agency was unsatisfied.

Since the bribe revelations, the Global Fund has approved more aid for the Malaria Center but insisted that the money now flow through the U.N.