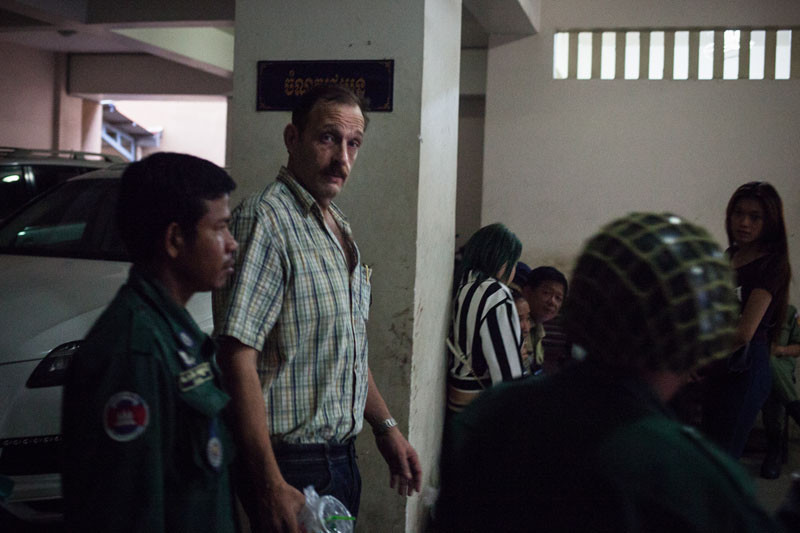 A British businessman jailed for more than 2 1/2 years without conviction was removed from the Phnom Penh Municipal Court on the first day of his trial Wednesday after accusing the court of gross malpractice and threatening to walk out himself.

Charged with forging documents and illegally clearing forest in Banteay Meanchey province, Gregg Fryett has long claimed that he was set up by officials including Ang Mealaktei, the former director of the municipal court, who is himself now in prison on serious corruption charges.

After a “technical error” by prison officials saw him miss the start of proceedings, Mr. Fryett chastised Presiding Judge Chuon Sokreasey for allowing an official from the Anti-Corruption Unit (ACU), which investigated the case, to be appointed as his translator.

“He is not allowed to translate,” Mr. Fryett said. “He is a police officer. I do not accept this translator. Under Article 330 [of the Code of Criminal Procedure], he is ineligible. These are your rules.”

Judge Sokreasey interjected, telling Mr. Fryett that the court had made a decision about the translator and that the decision was final. The pair then spoke over each other at increasing volumes in a battle to be heard.

Finally, a bemused-looking Mr. Fryett directly addressed the young ACU translator, who was standing at his side while attempting to pass on the judge’s messages.

“Go and sit down over there,” he told him, pointing to the gallery. “Sorry mate, it’s not personal.”

“If David Chanaiwa does not act as my translator, this hearing does not move forward with my participation. End of story,” he said, referring to the disbarred Cambodian- American lawyer who befriended Mr. Fryett in prison after he was jailed for committing assault at the scene of a traffic accident.

Judge Sokreasey then ordered judicial police to remove the defendant.

“This is the court’s decision. If you don’t want to listen, you can go outside,” he said. “The court does not need you to proceed.”

Wednesday’s hearing into the case against Mr. Fryett’s firm, International Green Energy (IGE), was the first to take place since Mr. Mealaktei was removed from his position in February amid allegations of corruption in his handling of criminal cases.

Two IGE employees, a lawyer and a Banteay Meanchey provincial official, also stand charged in the case, accused of forging public documents to take control of land owned by Mao Malay, the wife of Deputy Prime Minister Ke Kim Yan, and then illegally clearing the land.

A 2012 letter from then-Banteay Meanchey provincial governor Oung Oeun to Prime Minister Hun Sen and ACU chairman Om Yentieng, however, suggests that the allegations against the firm may be unfounded.

The letter said that Mr. Mealaktei had colluded with Vann Sophana, chief of the Forestry Administration’s Northern Tonle Sap Inspectorate, and Tou Tean Toeu, a former deputy provincial governor, to “illegally” confiscate hundreds of thousands of dollars worth of machinery belonging to IGE after its parent company, Sustainable Agro Energy, came under investigation by the U.K.’s Serious Fraud Office.

A month later, the ACU launched an investigation into IGE and six months later made its first arrests in the case, taking into custody IGE employees Soeun Denny and Oum Sam An. They have now been jailed far longer than the 18 months an individual can be held in provisional detention, as has Mr. Fryett, who was arrested in March 2013.

From a holding cell in the courthouse Wednesday, Mr. Fryett said he met with the British Embassy on Tuesday and had been assured that he was justified in his stance against the court’s conduct.

“They’ve taken legal advice and these people are definitely illegally detaining me beyond lawful limits since July 18, 2014,” he said. “They also absolutely confirmed that I should have a translator of my choice.”

Theepan Selvaratnam, vice consul at the embassy, confirmed that Mr. Fryett was receiving consular assistance, but declined to comment further.

Sok Sam Oeun, a lawyer for Mr. Denny and Mr. Sam An, has also asked the court to consider the fact that they have been unlawfully detained, but to no avail. Outside the courtroom Wednesday, Mr. Denny decried the forgery charges against him and claimed that the land the pair is charged with illegally clearing was planted with cassava before they took it over.

“Am I a fall guy? I am just an employee. What would I know about the land documents?” he said.

“Gregg is a real investor, bringing millions of dollars to Cambodia, and the person who killed that is Ang Mealaktei and his accomplices,” he added.

Mr. Oeun, the former governor whose signature was on the letter accusing Mr. Mealaktei of malfeasance, has claimed that after drafting it, he decided not to send it and that his secretary, Ouk Keo Ratanak, must have done so without his authorization.

Mr. Keo Ratanak was arrested in January 2014 and charged with forging a duplicate land title and selling it to IGE.

At the courthouse Wednesday, Mr. Keo Ratanak said he had done nothing more than proofread the letter and send it back to his former boss.

Regardless, he said, the letter had made him a target of Mr. Mealaktei.

“Ang Mealaktei had a grudge against the former governor and he set up the case to mistreat him, but they could do nothing to him so they mistreated me,” he said.

“The fact is that Ang Mealaktei attempted to extort money from Gregg, but Gregg refused to give it, and then he set up this case.”