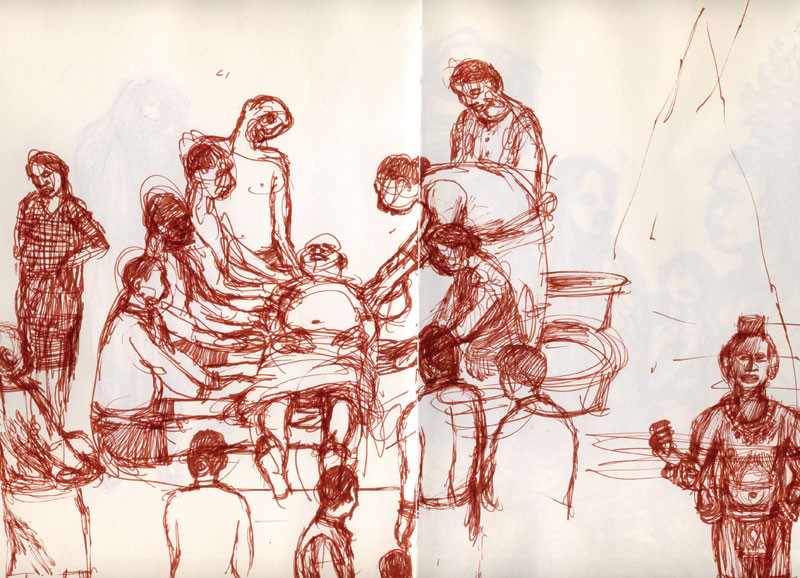 During his recent trip to Siem Reap City, Australian artist Andy Townsend got into the habit of taking refuge at Wat Bo pagoda, sitting quietly for a few hours with his sketchbook, pens and pencils.

Visiting the city for the second time in July with his daughter Rose and his wife, artist Suzie Bleach, Mr. Townsend soon became a familiar figure at the pagoda. “It’s an extraordinary place. We found this a beautiful sanctuary in the hustle and bustle of Siem Reap,” he said.

Then, one night, he was allowed to attend a very special ritual.

“One evening, I realized I had left my ink bottle on the balustrade. So I went back to Wat Bo,” Mr. Townsend said. Once at the pagoda, he sat down and took out his sketchbook as he always did.

Soon he realized that something unusual was taking place nearby. A group of about nine men were sitting in two rows, facing each other. “They were holding with respect a man who was lying on their lap, washing him with an abundance of soap and water,” Mr. Townsend recalled.

“At first, I was not sure what I was witnessing…but at some point I realized that the man was deceased,” he said. “Their friend, brother or father was lying across their lap.

“I felt quite overawed. I was conscious of witnessing something profound and touching.”

Eventually, a man approached him and, seeing that he was sketching the scene, invited him to come closer.

“I found a quiet corner about 5 or 6 meters away…. I knew I had to be discreet, although people seemed to be quite relaxed about my being there.” A sketchbook usually does not make people feel intruded upon, Mr. Townsend said, but had he been holding a camera, they might have been less receptive.

The 60-year-old artist had only a few minutes to draw the scene as the men tended to the body and women brought them water for the washing.

According to Theravada Buddhist beliefs, a person who passes away is first summoned before Yama, the god of the dead, to be judged. It is this wrathful deity, known in Cambodia as Yomreach, who decides on the appropriate fate for that person, whether he should return to Earth or be sent to one of the heavens or hells.
In the Cambodian tradition, the body is washed shortly after death to prepare the deceased for the meeting with Yama.

“Done discreetly, it is considered important because, in popular belief, the deceased will appear before Yama, the deity of the dead, and therefore must be, if I may say so, presentable,” said Ang Choulean, an ethnologist specializing in Cambodian traditions and beliefs.

Some families keep the body of the deceased at home for relatives and friends to visit, so the washing of the body is done privately by a few relatives and acquaintances familiar with the task, he said.

Once clean, the body will be covered with a white sheet and laid down in the main room of the house so that visitors can see the deceased when they come to pay their respects to the family.

Some families will opt to prepare the body of the deceased and lay it in state at their pagoda rather than at home, as in the case that Mr. Townsend witnessed at Wat Bo.

Once they had dried the body, he recalled, “The men picked the fellow up and gently carried him to the pavilion next to where they were, laid him on a shroud and dressed him.”

Mr. Townsend recognized on the man’s shirt the logo he had seen on the clothes of staff in Angkor Archaeological Park a few kilometers away.

Money was put in the hand of the deceased so that, according to popular belief, he could pay the guards who might block his way to Yomreach and also have money when he is reincarnated.

Then an attendant covered the body with a shroud.

Whether at a relative’s home or a pagoda, a body may remain lying in state for several days. Then the cremation ceremony is held, and a crucial post-cremation ritual known as “pre rup,” or the turning of the body, is performed by designated pagoda attendants.

Once the incineration is complete and the ashes cooled, the attendants form the ashes into the shape of a human figure. Molding the head to face one direction, they ask one another whether this is the right direction for the deceased to go to attain reincarnation. The first answer being no, they reshape the body with the head in another direction and go through the question and answer again. Eventually, the head of the effigy faces east and the attendant will respond, “Yes, this is the right direction.”

“This is why funerals are so important—because if they are not done properly, this prevents the deceased’s soul from being reincarnated,” turning it into an errant soul, he explained.

Pchum Ben, Cambodia’s most important religious celebration, which starts Sunday and will end on October 11, concerns those lost souls—destitute people, orphans, the abandoned elderly or people killed in conflicts—who did not get proper funeral rites, Mr. Choulean said.

“This actually is the chief meaning of Pchum Ben: to help errant souls be reincarnated, and not be condemned to eternally wander,” he said.

Unique to Cambodia, the 15-day observance dates back to Angkorian times and is also an opportunity to remember and care for the souls of ancestors and departed relatives, Mr. Choulean said.

During the first 14 days of the festival, people gather at pagodas before dawn. They walk three times in silence around the main building, throwing balls of rice—which translates to “Pchum Ben” in Khmer—to feed the troubled souls so they can be reincarnated.

“This ceremony…is actually spectacular because it takes place at night amidst a silent crowd. It’s beautiful,” Mr. Choulean said. At dawn, people hold a regular ceremony, offering food to the monks.

Pchum Ben concludes on the 15th day with a major religious ceremony at pagodas that ends around noon, although monks may hold prayers through the day at some pagodas.

For Mr. Townsend, being allowed to view the washing of a deceased’s body was unforgettable.

“I was inside a beautiful religious scene,” he said. “That night, I developed this very brief sketch,” using an acrylic pen.

His plan is to eventually turn the drawing into a large painting. But for now, he prefers to leave it as a sketch: a snapshot of a very special moment.