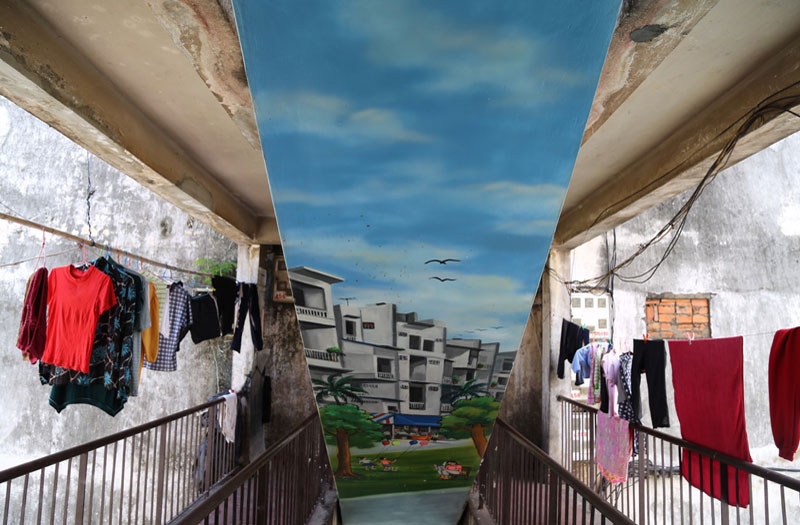 In Phnom Penh, a Grand Urban Plan That Never Came to Be

Today, the White Building stands as a lonely remnant of New Khmer Architecture amid a tangle of shophouses and hastily erected mid-rise hotels in Phnom Penh’s Tonle Bassac neighborhood.

The historic housing project has become one of the city center’s few remaining architectural symbols of Cambodia’s vibrant 1960s, and the municipal government’s announcement last month that it had been condemned and would be demolished sparked public outrage. (The city later backtracked from its threat to demolish the building.)

But in 1962, with Cambodia riding the wave of post-independence exuberance, the building was just a small part of then-Prince Norodom Sihanouk’s grand vision for an innovative, modern city center along the Bassac River.

Designed by a team of international and local architects headed by Vann Molyvann, the Bassac River Front complex was an ambitious project to develop 24 hectares of prime riverfront land with affordable housing units, cultural centers and other public buildings.

The original Bassac River Front master plan was set to include much more than ever materialized, including a national parliament building, a museum for the Royal Crusade of Independence, a school of art, music and classical dance, a school of public works, a national art gallery and an international hotel.

But the project only went as far as the construction of the Preah Suramarit National Theater, a cultural exhibition hall and three apartment buildings (including the White Building) before King Sihanouk was ousted in 1970, paving the way for the Khmer Rouge’s subsequent rise to power and destruction of the city.

“The less urgent buildings, like the galleries and cultural centers, were to come later. But history got in the way.”
“The design was quite revolutionary at the time,” Mr. Collins said. “It was about housing, but it was also going to be this big cultural precinct. And the springboard for all of it was independence.”

Mr. Molyvann, who was in France when French architect Le Corbusier started his pioneering work, wanted to introduce elements of modern housing from abroad, but modify them to suit traditional Khmer living habits.

The resulting apartment buildings—with their stacked units, wide-open spaces and communal gardens—were highly original for Cambodia in both form and function. They were rented out to low- and middle-income families, intellectuals, artists and civil servants, many of whom had migrated to Phnom Penh from the provinces in the wake of independence.

Mr. Collins said the Bassac River Front buildings became derelict during the Khmer Rouge regime, after which they were occupied and transformed by squatters. Today, the White Building is the only remaining Bassac River Front structure that still looks like it did in the 1960s.

The former National Bank Apartment Complex has been renovated as the Russian Embassy, while the former Olympic Village Apartment Complex is unrecognizable as the Phnom Penh Center, which is used for commercial purposes. The National Theater caught fire in 1994 and was later demolished. And the cultural exhibition hall has now become the Peace Book Center.

Even the riverfront park and garden, which once stretched along the entire length of the Tonle Bassac river, fell into a state of neglect after the war and has since been bought up in parts and redeveloped by NagaWorld Casino, the Phnom Penh Korea Business Center and other private companies.

Pen Sereypagna, an architect with the Vann Molyvann Project, an initiative that studies and documents Mr. Molyvann’s architecture, said the Bassac River Front descent into either squalor or piecemeal commercial use in recent decades is emblematic of a shift in urban planning strategy, from the “Buddhist socialism” of King Sihanouk’s reign to the direct investment policies of today.

“You don’t see anything like [the Bassac River Front complex] now, because urban development is based so much in the private realm,” he said. “Public infrastructure is bought and turned around for private use.”

Mr. Sereypagna added that urban development driven solely by private sector investment becomes problematic when coupled with a lack of proper city planning or housing solutions for low-income city-dwellers. That’s when urban growth spirals out of control, he said.

“Nowadays, we don’t have a master plan for the city,” he said. “We don’t even have zoning or building codes. In the ‘60s, we built infrastructure first and buildings after. But now we build the buildings without any infrastructure at all.”

According to Tep Makathy, an urban management specialist at the Ministry of Land Management, rural to urban migration is accelerating throughout the country, with Phnom Penh alone absorbing about half of all migrants. He said the country’s urban population peaked this year at nearly 30 percent of the total population (or 4.5 million people), which is three times as high as it was in 1960, when King Sihanouk first deemed urban in-migration a problem in the absence of sufficient public housing.

Mr. Makathy said the government is taking steps to improve management of urban growth, like setting up a separate housing branch in the Land Management Ministry a few months ago. But for now, the only national housing policy is “pro-poor” resettlement, transferring the urban poor to resettlement sites on the outskirts of town. Up to 70,000 people have been displaced from central Phnom Penh to relocation sites increasingly far from the city center over the past 13 years, according to a report released last year by housing-rights NGO Sahmakum Teang Tnaut.

“When thinking about social housing options today, nothing comes to mind, Mr. Makathy said. “Housing is almost all based on profit-oriented investment. But we have strongly considered incorporating a housing plan into the national urban development strategy.”

Until such an initiative is carried out, the White Building remains the last bastion of modern community housing for low-income urban residents in Phnom Penh. It also serves as an enduring reminder of what the capital might have become if King Sihanouk’s vision for the Bassac River Front development had been realized in full.

“The Building has long been considered the identity of Phnom Penh itself,” Mr. Makathy said. “It’s a symbol of the Golden Age and that period of growth. Cambodia was called the Southeast Asian ‘black diamond’ back then, and people here are so proud of that.”

“It represents a time when the government prioritized housing for its citizens, too. For me, and for many people, it’s a symbol of care.”