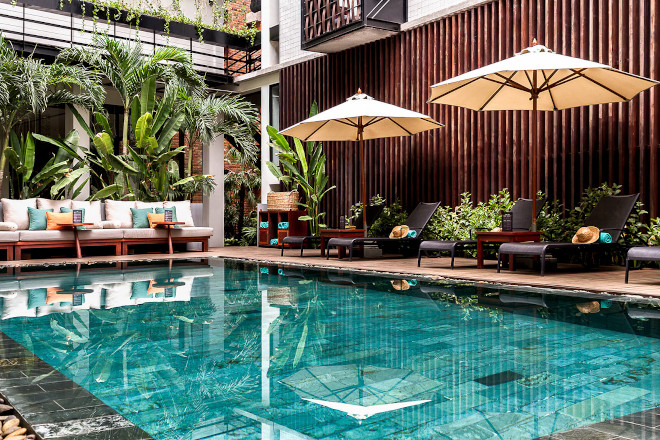 The Aviary, Siem Reap’s designer Boutique Hotel with a love for Cambodian artists

Siem Reap has been growing popular with the tourists and now the newly renovated Aviary is the perfect blend of French aesthetics, traditional Khmer crafts and impeccable customer service.

Many hotels call themselves urban escapes but when you’re in the heart of Siem Reap, not quite a sprawling urban commercial jungle, does it really necessitate an escape? Hence, when it comes The Aviary Hotel, a boutique hotel inspired by nature and Cambodia’s rich heritage of traditional crafts, the luxuriousness of this sophisticated Cambodian oasis is purely incidental, coming by way of celebrating the beauty and diversity of the kingdom’s avian creatures and the immensely talented artisans residing within the 20 kilometre radii of the Old Market (aka city centre).

Siem Reap was little more than a village when French explorers such as Henri Mouhot “re-discovered” Angkor in the 19th century, and it still remains relatively unchanged today – even if a growing body of tourists have made the existence of Pub Street a contemporary contrivance; it takes nothing away from the city nor the hotel in which it resides.