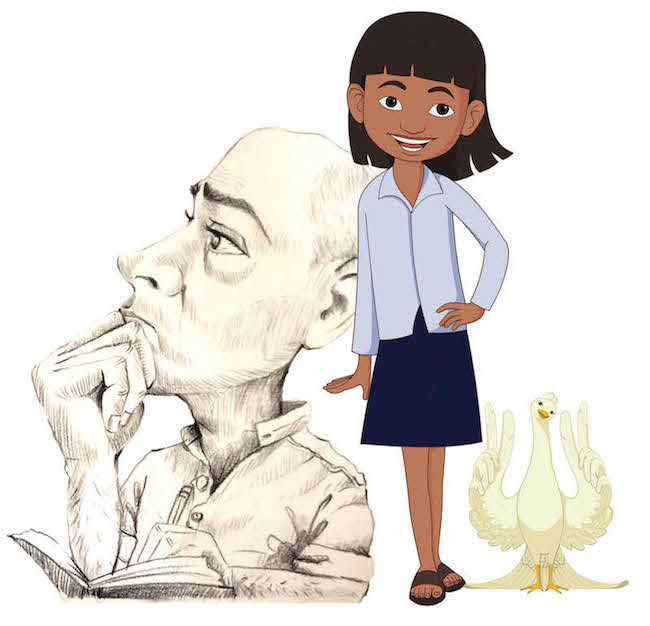 When: Tonight, from 6 to 8 p.m.
Where:Le Bistrot and gardens, Institut Francais, #218 Street

Visitors to the Institut Francais tonight will be met by life-size cardboard characters inspired by the 2D animations and illustrations of Phare Creative Studio, a new social enterprise that helps fund NGO Phare Ponleu Selpak in Battambang City.

The launch event for the animation and graphic design studio—which will be split between Battambang and Phnom Penh—will also feature artists painting on-site and musicians playing various instruments, all of them students and artists from Phare.

For Poy Chhunly, who was 17 years old when he started studying at Phare in 1998 and has long been one of its teachers, the launch of the enterprise is nothing short of a miracle. “Before, it was just a studio that we had created…and it got bigger and bigger,” he said on Wednesday.

Mr. Chhunly said he had always been fascinated by 2D and 3D animation. So 10 years ago, he launched the “1000 Hands Animation Studio” at Phare, while a colleague started the Sonleuk Thmey graphic design studio, and the two soon joined together.

The next step was to turn the combined studio into a social enterprise—as was done with Phare, the Cambodian Circus, which was created in Siem Reap City to provide employment for Phare’s circus school graduates, said Eric Regnault, Phare executive director in

Battambang. As a social enterprise, the studio would need to be able to support employees with appropriate salaries and health care coverage, he said on Wednesday, with profits going to the NGO so it could continue offering free arts training to students of limited means.

So Coralie Baudet was brought in last year. Trained in social enterprise management in France, she developed a business plan and marketing strategy for the studio. “For instance, we know there is a demand in animation” with very few people able to meet it, she said. So among other approaches, Ms. Baudet has pitched the studio’s animation skills to various clients since August.

Last year’s animation projects included a series combining video and 2D animation on the danger of cluster munitions commissioned by Handicap International Cambodia. The work includes elements of a painting by Phare teacher and artist Srey Bandol as background in a scene.

Over the years, the studio—in its pre-enterprise phase—has produced the animation “Plastic Waste Never Dies” on plastic-waste pollution for the EXO Foundation and Unesco Cambodia in 2015; a poster on cultural diversity on the Tonle Sap river done in 2013 for the Apsara Authority, the government agency managing Angkor Archaeological Park; and book design and illustrations for the book “A Journey on the Jayavarman” cruise ship for Heritage Line in 2010.

The studio’s full-time staff consists of Ms. Baudet and eight Cambodians, including Mr. Chhunly as senior animator—he still teaches at Phare. Plans are to give the school’s graduates the opportunity to work at the studio so they can get on-the-job experience to help them find work in the field, Ms. Baudet said.

And beyond this, she said, “The dream, actually, would be to create our own cartoon series produced especially for Cambodians in our own studio.”