King Suryavarman I, who ruled the Khmer empire during the first half of the 11th century, is believed to have brought together what was previously a fractured land and laid much of the physical and political groundwork for kings that came after him.

“Suryavarman expanded the territory under Angkorean control, colonizing the western end of the Tonle Sap with new religious foundations,” writes historian David Chandler in his book “A History of Angkor.”

The king is also believed to have expanded and improved road and irrigation systems, increasing the population of Angkor and bettering the livelihoods of those who lived there.

One thing that set Suryavarman I apart from other great kings—to the puzzlement of historians and archaeologists—was that he did not seem to have erected his own mountain temple: Jayavarman V built Ta Keo in the 10th century, Suryavarman II Angkor Wat in the early 12th century and Jayavarman VII the Bayon in the late 12th century.

But that mystery seems to have been solved thanks to cutting-edge research into the iron used to build the Baphuon temple, the second largest structure in Angkor Archaelogical Park after Angkor Wat.

This three-tiered pyramid was the monument that Suryavarman I built, according to carbon-dating of the metal used to hold the temple together.

“It’s very strange that a king with that amount of influence and power didn’t build himself anything in Angkor,” said archaeologist Mitch Hendrickson of the University of Illinois at Chicago, who headed the research team along with archaeometallurgist Stephanie Leroy of the Archaeomaterials and Alteration Prediction Laboratory in France.

Carbon-dating is not an exact science, due largely to fluctuating amounts of carbon in the air during a given time period. “But what’s exciting about the results that we got is that the majority of our results have a very limited range from the late part of the 10th century to the early part of the 11th century.” And this indicates the reign of Suryavarman I, he said.

The story behind Baphuon has always been something of a mystery.

Since the first French archaeologists began trying to determine construction dates of monuments more than a century ago, researchers have had to rely mostly on inscriptions on stone slabs that sometimes indicate the date of a monument’s dedication, Mr. Hendrickson said.

“Unfortunately, inscriptions can move and a king can come along and re-inscribe something…. And in the case of Baphuon, we don’t have any inscription.”

So its construction date was based on vague mentions in other inscriptions and on the account of Chinese diplomat Zhou Daguan, who visited Angkor in the late 13th century and speaks in his report of a “bronze tower…very impressive in sight” that researchers believe stood on top of Baphuon.

In 2008, Mr. Hendrickson and Ms. Leroy were conducting a study of how iron was produced during Angkor when they decided to also look into the use of the iron objects being produced. They met with the late Pascal Royere, an archaeologist at the French School of Asian Studies (EFEO), who had found around 15 “crampons” while restoring Baphuon.

Crampons are joints made of high-quality iron—essentially steel—that Cambodians used in monument construction: They would carve a space, put in the crampon and pour lead to seal stones in place, Mr. Hendrickson said.

The great advantage of the Baphuon crampons for Ms. Leroy and Mr. Hendrickson was that they had been found in the stones, which established their link not only to the monument but also to its specific phases of construction. Since it had been entirely dismantled in the 1960s in order to strengthen it, Mr. Royere knew exactly where each of its 300,000 stones fit as he was reassembling the 34.8-meter high pyramid.

So having obtained a few crampons from the monument, Ms. Leroy and her team got to work at their lab, which is part of the French National Center for Scientific Research (CNRS).

Carbon-14 dating iron goes back to the 1960s, but it’s only in the last two or three years that the technique has become reliable enough to provide “absolute dating,” she said. “Therefore we were able to definitely and directly attribute the construction of the Baphuon to the reign of a specific king, that is, Suryavarman I.”

The technique also allowed the team to establish that the Buddha built on the west side of the monument—a sculpture standing 12 meters tall and 75 meters wide—was actually created in the 15th century and not in the 16th century, as previously believed. This means that shortly after the Thai forces from the kingdom of Ayutthaya had attacked Angkor in the early 1430s, a major Theravada Buddhist sculpture was built on the Baphuon, Mr. Hendrickson said.

“The question is: Why did it get built?”

During the first part of the 15th century at Angkor, he said, “this is when things start to go wrong—badly.”

“You have the incursion from Ayutthaya, a long list of conflicts with them. And you have decades of drought and decades of rain that are intermingling.” While it is believed that Ayutthaya forces attacked and left with booty, there is no real evidence that they actually occupied the region or that the Khmer population left.

However, this Buddha sculpture raises several possibilities, Mr. Hendrickson said. It could have been built to mark the end of droughts and downpours. Or people may have wanted to celebrate, he said, “the kicking out of the Ayutthayans from Angkor.”

“Or, which is probably the most controversial possibility that many people may not like: Was it actually built by the Ayutthayan forces?” It would likely have been built by Khmer workers, but it is possible that Ayutthaya ordered its construction to leave its imprint on Angkor, Mr. Hendrickson added.

“We may never know but this really brings up…that we have to think about the nature of the sack,” he said. While kings may have come and gone, recent research also shows that the population of around 650,000 people still living in Angkor likely remained there well after the “fall of the empire” in the 15th century.

The analysis of the Baphuon crampons, which was an EFEO project, was authorized in 2009 by Apsara Authority—the government agency that manages the Angkor park—and served as a pilot project to determine the validity of the technique.

The research team’s findings were published last November in PLOS ONE, the scientific journal of the Public Library of Science based in San Francisco.

Based on the results obtained, the team has submitted a request to Apsara to analyze more crampons found at Angkor. In addition, the team has been authorized by the Ministry of Culture and the National Museum in Phnom Penh to analyze Angkor Wat crampons in the museum’s collection.

As Mr. Hendrickson pointed out, one should keep in mind that the procedure is costly, time consuming and requires the most advanced scientific equipment in a laboratory with archaeometallurgists to staff it.

However, Ms. Leroy said, “for the first time, one can manage to provide absolute dating indicators and therefore no longer based on indirect interpretation or other types of studies.” 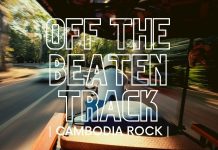 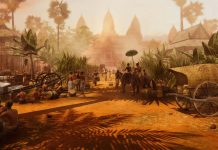 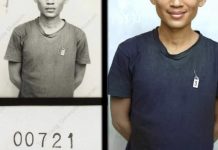 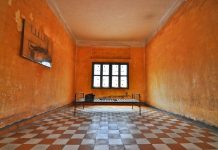