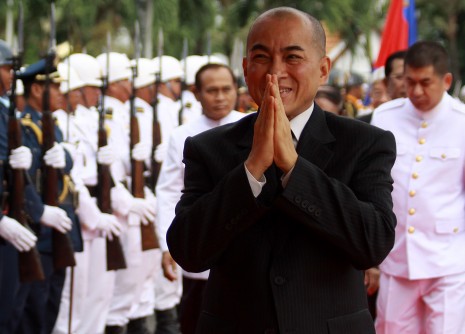 The Royal Palace has released a statement demanding that King and Queen Mother’s names be left out of politics and asked people not to “exploit” their names for political ends, state media claimed Thursday.

“The Royal Secretariat of Her Majesty Queen-Mother Norodom Monineath Sihanouk has issued a statement reacting against the use of the names of His Majesty the King and Her Majesty the Queen-Mother to seek political solution,” according to a report published by state-run Agence Kampuchea Presse (AKP).

The statement was attributed to Oum Daravuth, chief of the Royal Cabinet, and was reportedly a response to calls from “intellectuals and retired politicians” who have been lobbying for King Sihamoni to call the ruling CPP and opposition CNRP together for negotiations to end a political dispute that is entering its sixth month.

On January 6, political analysts Lao Mong Hay, Kem Ley and Sok Touch sent a letter to the King asking him to bring the political parties together for talks.

The AKP article also reported that Mr. Daravuth had, on behalf of the Royal family, “further rejected the use of words ‘national division’ after the national election.

According to Mr. Daravuth, the nation is not divided, just the two leading political parties.

“Cambodian people voted for two political parties to jointly solve national issues, but the post-election problem is the conflict between the two parties,” the AKP article states.

Contacted Thursday about the report, Mr. Daravuth said, “This is an old story,” and declined to comment further. Mr. Daravuth and a deputy at the Royal Cabinet both declined to provide the statement cited in the AKP article, reportedly dated January 20.

However, during a radio interview Thursday, Mr. Daravuth said that the King had already done his part to resolve the impasse between the ruling CPP and opposition CNRP.

“They [the political parties] should have the meeting among themselves. There is no need for them to come to the Royal Palace again or for His Majesty to call them again,” Mr. Daravuth said, adding that the King had already facilitated a meeting between Prime Minister Hun Sen and opposition leaders Sam Rainsy and Kem Sokha at the Royal Palace on September 15.

“Let them…negotiate with each other, meaning one side agrees to enter the National Assembly and another one agrees to reform the National Election Committee,” Mr. Daravuth said. “Then sign an agreement and they can invite His Majesty as a witness and symbol.”

Since the King opened the National Assembly in September, the CNRP has refused to take its seats until an investigation of the disputed July 2013 election is conducted.

The CPP has rejected numerous proposals by the opposition party to end their boycott, including an investigation into the July election and, most recently, an early election.

Son Soubert, a former member of the Constitutional Council now active in opposition politics, said that with blood being shed over the political divide, King Sihamoni is constitutionally bound to take part in restoring people’s rights and faith in government institutions.

“The dispute has become a national issue now. Article 8 [of the Constitution] says that the King is the symbol of national unity and…he is the guarantor and the defender of the rights and the freedoms of the people and the respect of all the international conventions,” he said.

Prince Sisowath Thomico, a former assistant to the late King Father Norodom Sihanouk, who ran as a CNRP candidate for parliament in July’s election, said that Norodom Sihanouk had interpreted the Constitution differently and had embraced the monarch’s role as a political mediator.

“King Sihanouk used to get involved in political disputes and try to get parties to find a solution. It was a personal interpretation of the Constitution by the King Father,” Prince Thomico said.

“[King Sihamoni’s] view of the Constitution is different. He wants to remain outside of the dispute.”

“It is true that the country is divided,” he added. “Whether the monarchy could help reunite the country, I don’t know.”