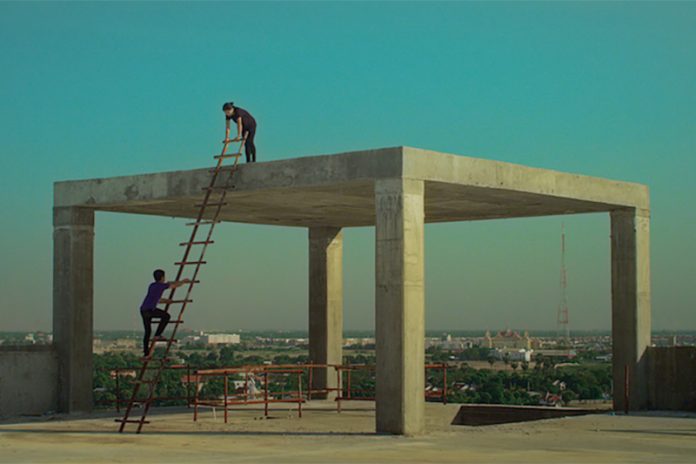 They can continue earning $150 a month as manual laborers in Phnom Penh, do the same work in distant Malaysia for double the salary or take a pay cut to become a better-dressed, lower-paid security guard.

In Mr. Chou’s feature film debut, the island is also a window into Phnom Penh’s social strata and the ambitions of its youth—a “symbol of so many things happening in Cambodia,” the director said on Thursday.

Stylish, melancholy and slow, the film captures the mood of a city slipping into something more modern and lonely.

It begins with 18-year-old Bora, in actor Nuon Sobon’s debut, bidding goodbye to his ailing mother in the provinces to begin a new life in Phnom Penh. Like many moments in the film, the dialogue and affection between them is soft-spoken.

“Yes, my dear,” she says, barely looking up from chopping vegetables.

Bora heads to Diamond Island, where he joins his friends building Elite Town, Casa Meridian and other pricey projects pitching a “heavenly lifestyle,” in the words of an ad spliced into the film.

Bora occupies a different reality: tin dorms, street-food dinners and perilous work. He and his wide-eyed crew take their circumstances in stride as they strut around the island, shooting the shit, eyeing possible lovers and rehearsing their makeout moves.

“Don’t be scared, we’re real men,” Virak, the de facto pack leader, claims, but his friends don’t look so sure.

Things change when Bora spots his brother Solei, who disappeared from the family five years before, driving past on Koh Pich. Solei says he is a student with a deep-pocketed U.S. sponsor. Bora soon gains an exclusive invitation to the cool kid’s club of nice phones, trendy clothes and nights out at Nova Club.

Even as he continues to work on the construction site, Bora gets sucked into his broody brother’s orbit. The split causes rifts with his old friends as Solei’s reliability is once again called into question.

Mr. Chou made a name for himself with his 2011 documentary “Golden Slumbers” about 1960s Cambodian cinema, an era in which his grandfather Van Chann Pheap Yun was a leading producer.

“Diamond Island” proves Mr. Chou knows how to evoke beauty from fiction, too.

The film rarely leaves Koh Pich. Its rubble, building shells and neon glows make for an aesthetically rich film. But the camera often lingers on a single shot for up to 45 seconds—an eternity in a Hollywood blockbuster, and even a stretch for most arthouse audiences. The tactic drains momentum from the plot, which advances in quiet talks and whispered conversations.

Both Bora and his brother, played by Battambang artist Nov Cheanick, bare little of themselves to the world. Their withdrawal, while well-acted, makes it harder to become invested in their relationship.

Like the other actors, Mr. Sobon and Mr. Cheanick were plucked from the streets, factories and nightclubs of Phnom Penh and thrust into the spotlight. The amateurism bears rich fruit, depicting camaraderie and alienation that feels sincere to anyone who has ever been young and lost with friends in an unfamiliar place.

Their inexperience tinted the actors’ performances with the “real color of truth,” Mr. Chou said. Getting them comfortable on set took several months of training in which he “always put the camera in their face—all of the time, all of the time” before seven weeks of shooting in December and January.

Mr. Sobon’s last year and a half is almost as dramatic as that of his character. He was scouted while working as a Kampot province minivan tout and thrust onto the main stage, even paying a recent visit to France to publicize the film.

“When I watched the movie, I was so proud of myself, because this movie has a lot of educational parts,” he said on Thursday. “I never expected that I would be able to work in a movie.”

Mr. Sobon and his colleagues all have expressed an interest in continuing acting, said Mr. Chou, a prospect that makes him both “happy and worried” given the industry’s standards for a particular look.

But Mr. Chou also hopes the film, made with a budget of about $700,000, will advance different notions of Cambodian cinema and connect with the people it portrays, even if it doesn’t become a breakout hit.

Cambodian youth “are very curious to see something new,” he said. “At the end, it’s about the emotion to me.”

The filmmaker also will continue work on “White Building,” which focuses on young Cambodians living in the iconic building and is directed by his Cambodian colleague Kavich Neang, while looking into new directing projects.

“Diamond Island” has already won a feature film award at Cannes Critics’ Week and top prizes at two other European festivals. It opens next Thursday at six theaters in Phnom Penh and Siem Reap in Khmer with English subtitles.