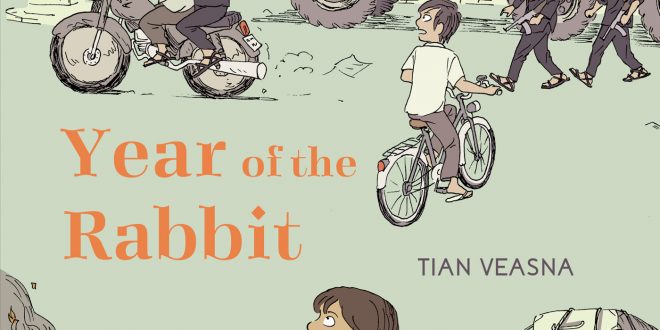 Graphic Novel Review: ‘Year of the Rabbit’ by Tian Veasna from Drawn+Quarterly

Year of the Rabbit by Tian Veasna from Drawn+Quarterly presents an especially poignant view of the Khmer Rouge by showing it through human eyes. Rather than giving a historical synopsis on political factions, Veasna’s story is told through the people who survived the nightmare that killed nearly two million people. As a number, this is staggering, but seeing the lives being lived adds to the haunting realism of one of the greatest tragedies in human history.

Veasna drafted Year of the Rabbit through interviews with family beginning in 1975 with the Khmer Rouge seizing Phnom Penh to the regime’s overthrow by the Vietnamese in 1979 and their adoptions of new lives abroad. There is the exception of his Aunt Chenda, whom Veasna describes in the denouement as having such pain in her loss that “she doesn’t want to hear about Cambodia anymore,” instead becoming fully Canadian with Country music and TV.

The kouprey: on the trail of Cambodia’s elusive wild cattle