The Cambodia DailyAll the news without fear or favor
HomeFeatures
FeaturesLifestyle

“Today happens to be the third day of the traditional ‘Water Festival,” and at night, when the sun turns copper red, the banks of the great river suddenly come to life…the long racing boats flying by in the frothy swirl of the waves.”

This account of Water Festival is dated November 25, 1901. But according to French author Pierre Loti, who wrote this in his book “Un pelerine d’Angkor,” or “A pilgrim of Angkor,” the event 113 years ago was as impressive as it is today. 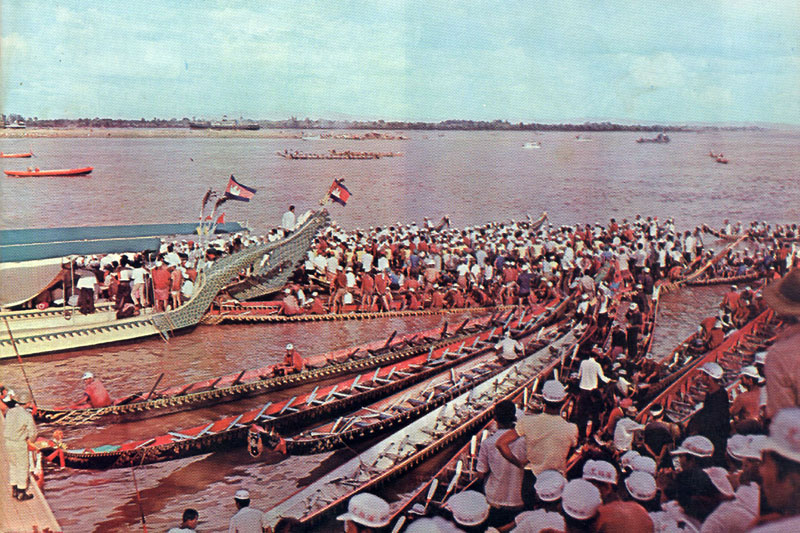 His description of the Water Festival was just one of many that French officials, researchers and travelers would write while Cambodia was under French administration. After independence in 1953, they would continue to report on what they saw as the most spectacular event of the year in Cambodia.

As early as 1887, an illustration of a racing boat appeared in the French publication “Le Magasin Pittoresque.” And in 1890, the French government magazine “Les Colonies Francaises” dedicated several pages to the meaning of the Water Festival. “This celebration, which is truly original, pertains to a local phenomenon that probably takes place nowhere else,” the magazine wrote.

The festival in Phnom Penh was born of the city’s geographic location, on the banks of two major waterways that change course in a spectacular way twice a year, said ethnologist Ang Choulean.

While boat races have been held throughout Asia for a long time, the Phnom Penh event has always been special due to this unique phenomenon, Mr. Choulean said.

The tradition probably began when Phnom Penh became Cambodia’s capital in 1866, he said. There may have been small celebrations held in Phnom Penh to mark the river’s course change prior to this date, but it took the king presiding over the event to make it a major occasion, he added.

Adhemar Leclere wrote in his 1916 book on Cambodian ceremonies that at the end of the boat races on the third day of the festival, a Brahman priest from the Royal Palace would cut a cord stretched between two boats where the two rivers meet. After this, he recounted, more than 100 boats would fly by as if swept along by the current thus released, the men shouting in excitement as they paddled as fast as they could.

Immediately afterward, the king would wash his face and hands in river water in front of his subjects. He would then sit down, which signaled the launch of the boats with lit floats.

The Water Festival takes place on the last full moon of the year by the lunar calendar, which this year took place Thursday night and was marked by ceremonies in Buddhist pagodas throughout the country.

Although no event compares to the one in Phnom Penh, people along the Mekong River and the Tonle Sap also celebrate the full moon and water-course change in their own way, said Ya Da, a teacher at the Royal University of Fine Arts who heads the university’s International Relations section.

Growing up on Koh Dach, an island near Phnom Penh, Mr. Da was familiar with such traditions. So a few years ago, he decided to research the history and customs associated with the Water Festival for his master’s degree.

Mr. Da soon discovered that ceremonies involving small boat races may date back to the time when the ancestors of today’s Cambodians first started living along the Mekong River, some 1,500 to 2,000 years ago.

The ceremonies were meant, he said, “to show gratitude to the God of Water. They believed that the god of water provided support for everything in agriculture: all forms of farming and especially fishing.”

“Some villagers in Vietnam, Myanmar, Thailand, Laos and parts of China that are along the Mekong River also have some celebrations at this time of year, I believe,” Mr. Da said. “But…in Cambodia, it’s much more important because of this big lake and the water turning around and going back to the sea. This carries a special meaning in Cambodia.”

According to tradition, the ritual for the Water Festival extended to the making of the racing boats, Mr. Da said. Whether 20, 30 or even 40 meters long, a boat had to be made of one tree. “People would hold a traditional ceremony to ask the god’s permission to cut the tree and to invite the god to remain in the tree,” Mr. Da said. Then they would take the tree to the Buddhist pagoda and afterwards discuss the name of the boat with a fortuneteller.

The boat would then be kept at the pagoda, although today, as the sporting side of the event is becoming more important, some racing boats are kept at sponsors’ properties, Mr. Da added.

Prior to the 1970s, the role of the king included living on the riverside during the festival. “The king…goes to his floating residence, which he will not leave during the three days of the celebration,” wrote Guy Poree and Eveline Maspero in their 1938 publication on Cambodian customs, “Moeurs et Coutumes des Khmers.”

In the 1960s, as Cambodian urban planners and architects were reshaping the look of Phnom Penh, Prince Norodom Sihanouk had the royal floating home redesigned.

“In its revitalized and renovated form, the floating pavilion was used extensively in the 1950s and 1960s by Prince Sihanouk for riverfront events and spectacles: viewing boat races, yachting and firework displays,” said Darryl Collins, an authority on Cambodian architecture of the 1950s and 1960s.

It is in this pavilion that Prince Sihanouk hosted French President Charles de Gaulle, for whom he had tremendous admiration, during the 1966 Water Festival.

Like at most Cambodian celebrations, the Water Festival usual- ly features laughter interspersed with the racing, both on and off the boats. As Christopher Pym mentions in his 1960 book “Mistapim in Cambodia,” some boats carry clowns who do not hesitate to sing bawdy lines in Khmer to get crews and spectators laughing.

One of their customary songs speaks of Khmer women making love all night, Vietnamese women all day, and French women only in the evening. “This is the very stuff of which the [Water Festival] is made, so no wonder the Khmers enjoy it,” Pym wrote.

Foreign visitors may not have understood the jokes, but they certainly enjoyed the whole show, which has always attracted photographers. As a result, some postcards of the races dating back more than a century can be found at the stamp market Marche aux Timbres in Paris, said Joel Montague, who included a few of them in his book “Picture Postcards of Cambodia.”

“The Water Festival cards are rather rare, however, compared to the endless supply of early Angkor Wat and royal dancers postcards,” he said.

There are also numerous accounts of the festival that visitors have sent to friends and family, or included in officials reports, over the years.

“It is interesting to read that Europeans don’t always grasp the meaning of some of [the Water Festival’s] ancient customs,” said Francois Dore of the Librairie du Siam et des Colonies, a library and bookstore specializing in the history and literature of Indochina. “They have only retained the spectacular aspect of the boat race.”

On the other hand, he added, “Cambodians, and even those deep into the countryside, know that on the night of that particular full moon, one must salute the moon with deference so that the waters will carry away all the murk and bad spirits, and return to flood the land with nourishment, guaranteeing good harvest.”

Previous articleEGA Reports Losses Due to NagaWorld Slots
Next articleCarnival, Roll On