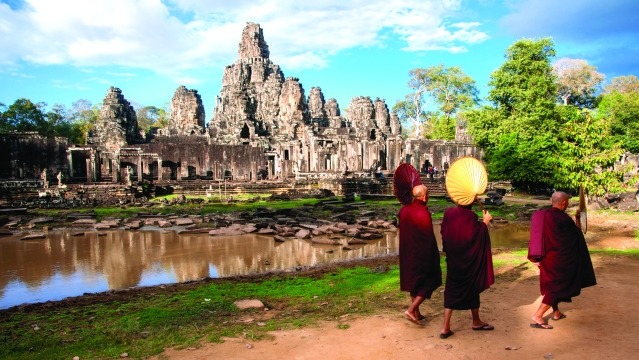 Angkor What? A Cambodian Caper

If one is given a choice of just one archaeological site to visit, without a second thought it should be Angkor Wat. It is the most magnificent, most massive, most impressive monument in the world. It is perhaps the only monument to have its silhouette adorning a country’s national flag.

From India, one has a choice of two routes to Cambodia. It is either via Kuala Lumpur or via Bangkok. We chose to go via Bangkok and return via KL.

We reached the border town Aran (Aranyaprathet) in a bus, which we boarded right at Bangkok’s Suvarnabhumi Airport after three hours of a comfortable flight. I asked a local the direction to my hotel, showing him the hotel name on a piece of paper. He pointed the finger upwards. Perplexed, my gaze followed his finger till we both broke into a laugh. We were standing directly under the glow sign of the hotel!