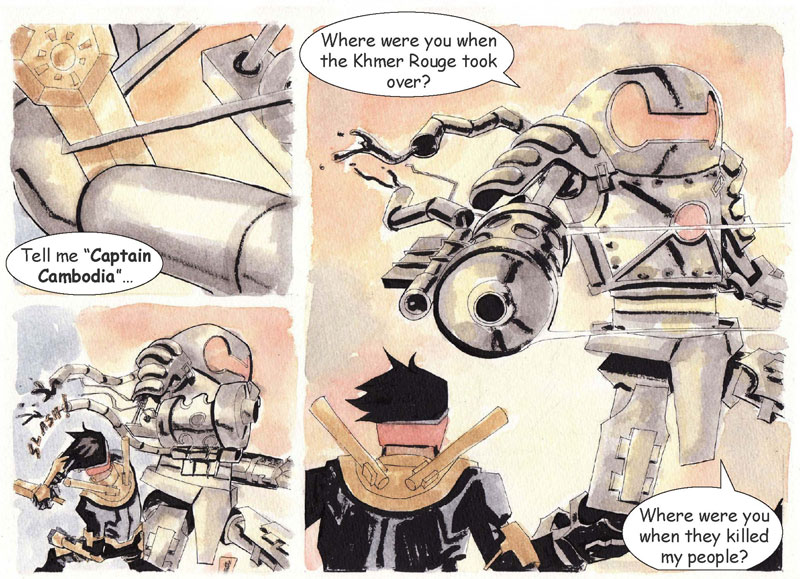 These are the words of comic book superhero “Krisna,” better known—in the fictitious version of modern Phnom Penh—as Captain Cambodia.

Set to be released on April 26, exactly three years after environmental activist Chut Wutty was shot dead in Koh Kong province, “Captain Cambodia” tells the tale of the Hindu god Krisna and the demon-spirit “It” in a classic comic-book clash of good versus evil.

“‘Captain Cambodia’ is a superhero comic book, but you have two levels of understanding,” its 35-year-old creator, Patrick Samnang Mey, said in an interview in Phnom Penh last week. “You have a level for children—the good guys and the bad guys—then you have the second level, which has to do with Cambodian politics.”

The comic opens with Krisna, the protector of the Khmer Empire and for whom Angkor Wat was built, fighting the evil It. After a heroic death, both hero and villain are reincarnated.

“Krisna comes back in the ’70s, but It comes back before him,” Mr. Mey said, rapidly scrolling through scanned pages of the upcoming book on a computer and pointing to the glowing eyes of It. “Red eyes for Khmer Rouge,” he said, explaining that through the ’70s and ’80s, It leads a horde of red-eyed zombies that helped carry out the work of Pol Pot’s murderous regime. 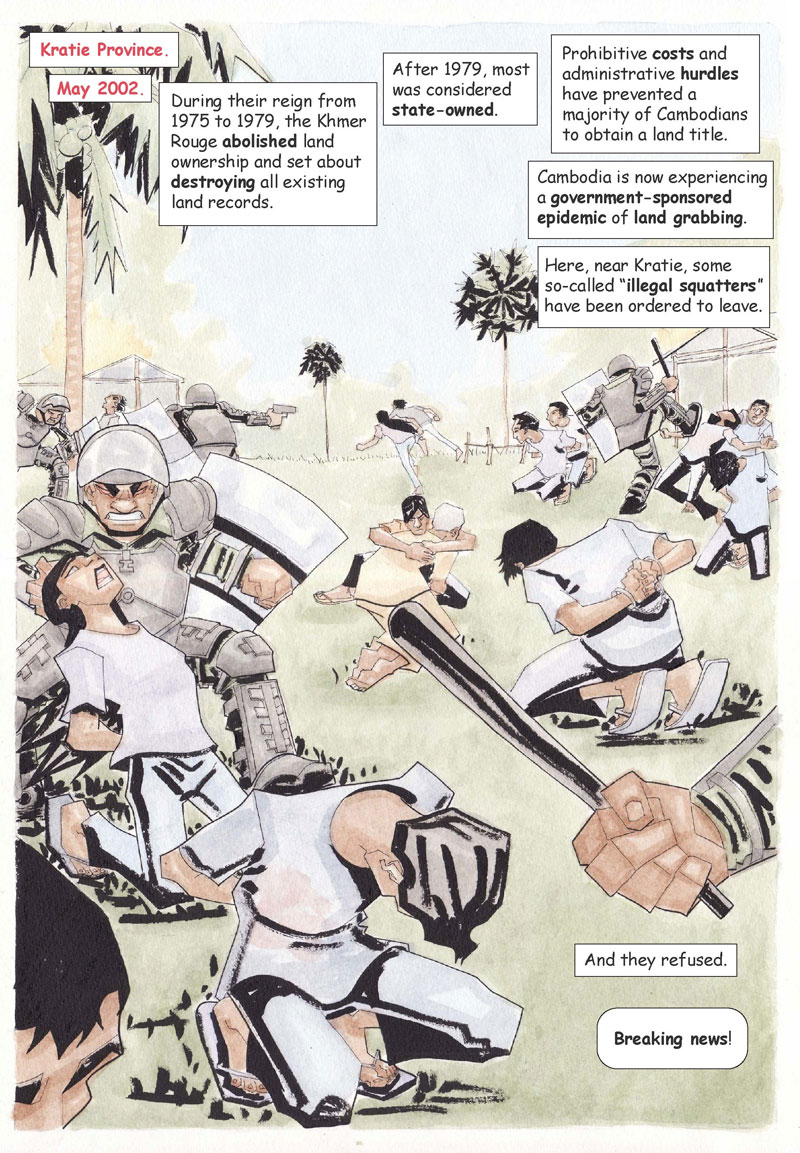 It was at this time in Cambodia’s history that Mr. Mey’s parents fled the country and resettled in France, where he was born. He first visited in Cambodia in 2003 and relocated permanently in 2008 to teach English.

His parents initially disapproved of his decision.

“Like many Cambodian refugees, my mother and father didn’t want me to go to Cambodia,” he said. “They saw Cambodia as it was when they left in the ’70s and ’80s…. Of course, they have changed their minds now. They see how Cambodia is changing.”

“When I was in France, I felt I did not fit exactly, so when I moved here and I could eat the food of my home and speak my language—I know it’s silly but I knew I fit here,” he said.

The cartoonist said he quickly became aware of, and interested in, Cambodia’s rampant corruption—several of his friends were affected by land grabbing and forced evictions—and took part in anti-government protests prior to the 2013 national election.

“I have always been involved. I demonstrated many times before the election,” he said.

Mr. Mey said he chose to set the final chapter of “Captain Cambodia” in 2012 because the year marked the peak of politically motivated violence in the country’s recent history.

“I guess this comic could be considered controversial,” he added, laughing to himself. 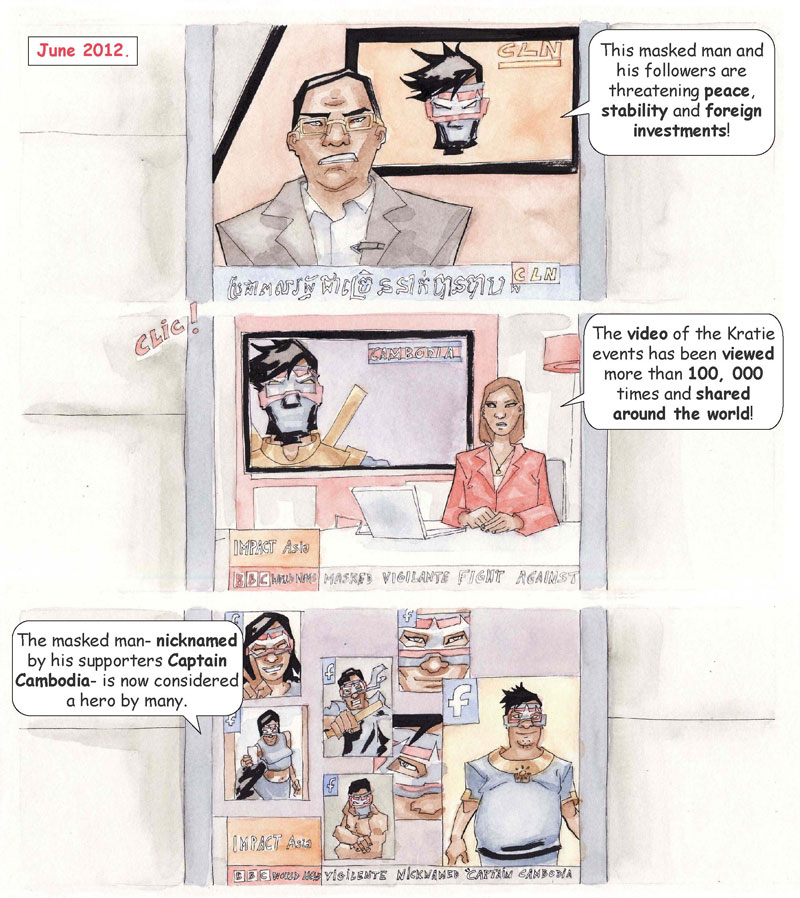 Getting “Captain Cambodia” published has not been easy.

Initially, Mr. Mey says he planned to publish the comic as a yearlong serial in a local newspaper. Only the first four pages were released.

Shortly afterward, the cartoonist tried publishing “Captain Cambodia” through the printing house that published his 2011 book “Eugenie: The Graphic Novel,” a love story that takes place in northern France and Cambodia.
But the printing house would not publish it.

“They actually said, ‘You could publish it, if you get a letter from the Ministry of Information with an authorization,’” he said.

“To be honest, I understand their decision. They employ 25 or more people. If they print my book and run into problems, I don’t want to be responsible for what happens.”

Finally, Mr. Mey decided to release “Captain Cambodia” for Amazon’s Kindle e-reader while he continues to look for a publisher abroad for the print edition—perhaps in Tokyo, he said, where he recently took up a position teaching American literature.

“Even if I wanted to sell the [print] book here, I am not sure Monument Books would sell it because of the content,” he said. 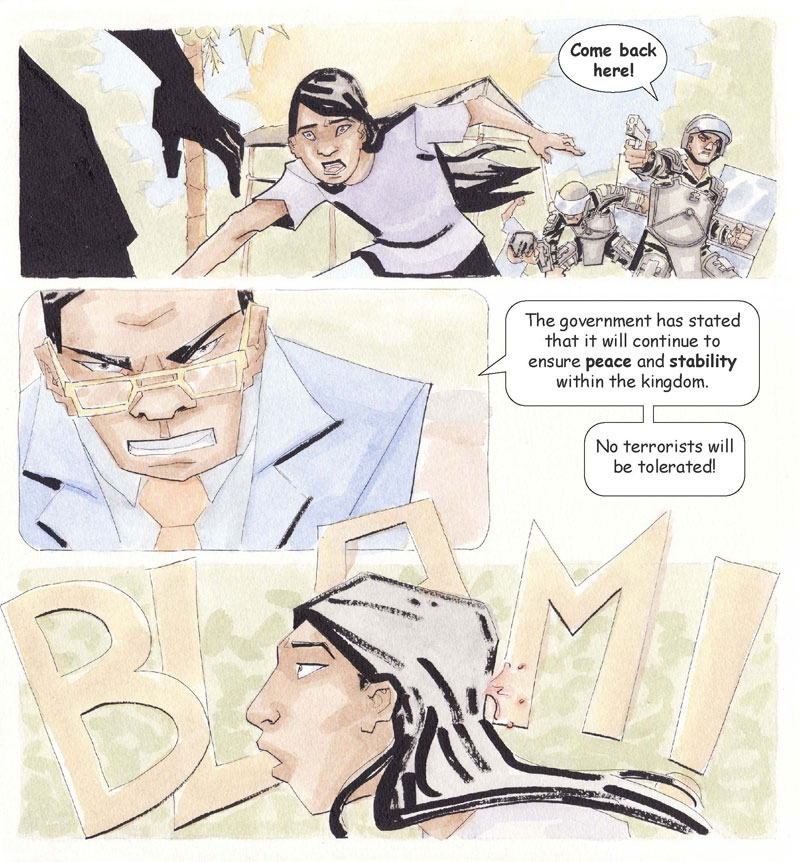 “I imagine that there are realistic risks, but I guess I don’t care,” Mr. Mey said of the possibility that “Captain Cambodia”’s content would land him in trouble with the law.

“I have the feeling that because Sam Rainsy came back, and since [the election], more and more people are starting to speak out about problems in Cambodia. At the same time, I think the government is trying to tighten things, sending people to prison. This is a turning point in Cambodia. You either try to speak out or shut up.”

Mr. Mey works with a pencil, a dip pen, a Chinese brush and watercolors, then writes the text using Adobe Illustrator. Each page takes him “easily 15 hours.”

After more than a year laboring over “Captain Cambodia,” Mr. Mey finds it impossible to hide his excitement about its release on April 26.