The Cambodia DailyAll the news without fear or favor
HomeLifestyle

A Foreign Visitor to Angkor—600 Years Ago

ទេសចរបរទេសមួយរូបមកកាន់អង្គរ គឺរយៈពេល៦០០ឆ្នាំមុនWhen Chinese diplomat Zhou Daguan was called back home in 1297 after spending nearly a year at King Indravarman III’s court at Angkor, he embarked upon a ritual that would be familiar to modern-day diplomats: sitting down to write a detailed report about the country he called Zhenla.

His jottings on what he had seen and heard during his year abroad became the basis of a book that has gone down through the centuries as the main source of information on daily life in the Angkorian empire. In it, Zhou Daguan covers everything from slavery to skin diseases, with digressions on hairstyles, gallbladder thieves and the availability of eggplant. 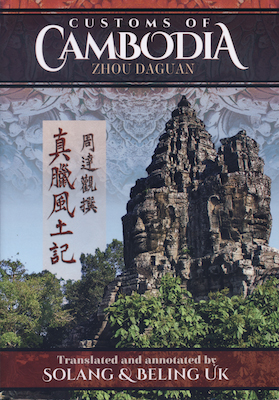 A new version of the book, annotated by the Cambodian-Chinese couple Solang and Beling Uk and published earlier this year by DatASIA Press, makes it clear that, no matter how conscientiously Zhou Daguan meant to observe his surroundings, he was still fundamentally a tourist in a foreign land.

He could only describe what he saw, what he was told by Cambodian officials he met or by Chinese expatriates living in Yasodharapura, as the capital of the Angkorian empire was called at the time.

Many of his observations would ring true to a foreigner observing Cambodia in 2016. He mocks sorcerers who purport to cure diseases, notes seeing rats as big as cats and grumbles about groups of “transvestites” who congregate in marketplaces to seek out Chinese customers. “This place is so dreadfully hot,” he complains toward the end of the book. “One would not be able to endure it without bathing many times each day.”

In a chapter titled “Immigration,” he writes that Chinese sailors often deserted their ships to settle in the area, as they “find it favorable that in this country clothing is not necessary. Also rice is easy to find and women easy to obtain. Housing is easy to maintain; it is easy to make do with few utensils and tools, and trade is easy to run.”

When in doubt, Zhou Daguan turned to what he knew. Searching for a name for a plant he saw, he called it “xiong,” a plant whose roots are used in Chinese medicine but which does not exist in Cambodia, the Uks’ annotations explain. When Zhou Daguan referred to “wild oxen,” he was likely trying to describe Cambodia’s banteng or kouprey species, they write.

Still, his account of customs he personally witnessed remains invaluable. For instance, he wrote that women packed their vaginas with warm cooked rice mixed with salt after giving birth, “to make it like a virgin’s again.”

“When I heard of this for the first time, I was surprised and was deeply suspicious about this information,” Zhou Daguan writes. “However, in the family I stayed with, there was a woman who gave birth, so I know this fact really well.”

He also described a ritual in which 6- to 11-year-old girls were deflowered by Buddhist monks or ascetics during a special ceremony for which parents had to pay hefty fees. Although no other historical record mentions this practice, Zhou Daguan’s account seems credible, according to Alain Forest, a scholar who recently published a history of religions in Cambodia from prehistoric times to today.

“However, we notice that Zhou Daguan does not seem clear as to how this was done,” he said in an email, adding that girls were probably deflowered “by hand” rather than through intercourse.

The importance of Zhou Daguan’s diplomatic report resides in the fact that the Khmer themselves left no account of daily life, customs or habits in the country prior to or during the Angkorian period. The stone inscriptions they wrote are either religious texts or official statements. They wrote all other documents on palm leaves or parchment made of animal skin, which have long since disintegrated due to the tropical climate.

“Zhou Daguan’s Record has been republished many times through the centuries—some parts have possibly been lost, others altered or wrongly reproduced,” the Uks write in a forward to their version of the book, which is entitled “Customs of Cambodia.”

Solang Uk is a Cambodian scientist who studied agriculture in Cambodia in the 1950s, entomology and toxicology in the U.S. in the 1960s and spent his career as a research biologist in Switzerland. His wife, Beling Uk, is a Chinese microbiologist who attended the National Taiwan University and was pursuing her Ph.D. in the U.S. when they met in the 1960s.

For years, Mr. Uk wanted to revisit Zhou Daguan’s book to clarify what he knew were errors or imprecisions, not only regarding his references to animals or plants, but also to locations, such as the fact that the Chinese diplomat appeared to have mixed up the inland town of Pursat with the village of Kompong Preah, which lies on the bank of the Tonle Sap lake. So after their retirement in the 2000s, the couple went to work.

In 1902, French scholar and Chinese expert Paul Pelliot translated Zhou Daguan’s work into French, and his French version of the text was later translated into English and used as a standard version of the book for years.

For their version, Solang and Beling Uk decided to go back to the Chinese manuscript, using as a reference the 14th-century version of Zhou Daguan’s report known as the Wu Guan edition.

Still, they did not attempt to translate the older form of Chinese entirely on their own, but drew upon modern Chinese and Khmer sources, Ms. Uk said in an interview. Zhou Daguan wrote in an ancient form of Chinese in which a word may hold numerous meanings, she said. “Also Chinese has no comma or period. It’s just continuously writing: If you break at the wrong place, you have different meanings again. So you need a real Chinese scholar to interpret the book.”

They obtained copies of two out-of-print books on Zhou Daguan’s text by Chinese-language scholars: Jin Ronghua’s work published in Taiwan in 1976 and Xia Nai’s in China in 2000. They also located a Khmer translation of the Chinese text published in the early 1970s by Cambodian writer and scholar Ly Thiam Teng.

While they were toiling away, a new translation of Zhou Daguan’s book was released in English in 2007 by Peter Harris, a British researcher. Nevertheless, the Uks decided to continue their work, focusing on adding to the text explanatory notes that would put into context what Zhou Daguan had alluded to.

“[B]eing neither archaeologists nor historians,” they write, they meant their 146-page book for the general public and therefore kept the explanations concise and illustrated the text with numerous color photos.

The couple was particularly keen to provide context for the things Zhou Daguan noticed but did not understand. For instance, when the diplomat notes that people from Zhenla called their country Ganbozhi, the Uks further explain that “Zhenla” was a purely foreign word and was never used by the Khmer of the time. A researcher even suggested in the 1960s that, since the word derives from the Chinese word for beeswax, Chinese sailors might have used that word for Cambodia because this was where they could get the product, they explain.

Still, despite the inaccuracies and incomplete descriptions they point out, many of Zhou Daguan’s descriptions were precise enough to hold true centuries later. For example, the diplomat notes that people in Yasodharapura—in what is now Siem Reap province —never ate white eels or frogs. The Uks recall hearing as late as the 1950s that people from the province still refrained from consuming these foods.

In his introduction to his diplomatic note, Zhou Daguan himself provides a candid assessment of his own knowledge of Zhenla after spending a year in the country.

“Even though I do not know all the details of their customs and the administrative matters of this country, I know enough general information and major matters,” he writes.