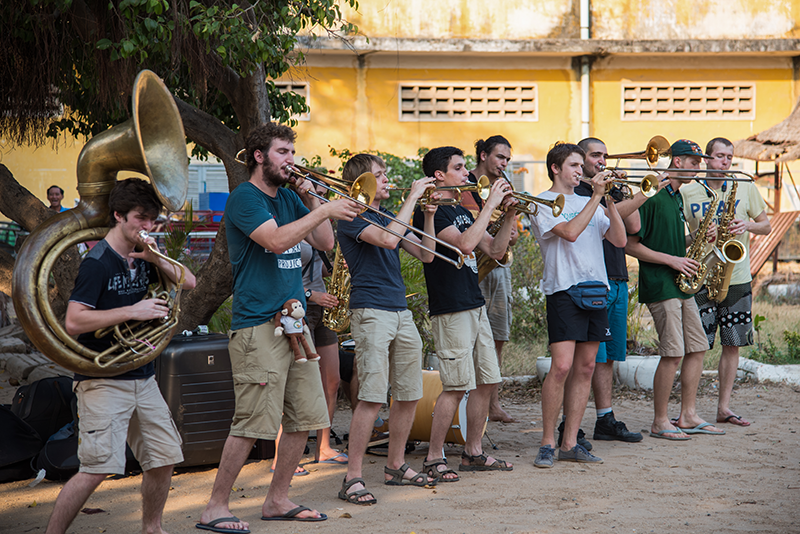 An engineering university is not where you would imagine a multi-instrumental brass troupe forming.

However, upon meeting at the Ecole Centrale Paris in 2014, a group of 11 musicians bonded over their love of brass and formed the Soundtrek Project, a group that breaks the mold of more traditional bands in the genre.

After plying their trade on the Paris circuit for about a year, Soundtrek took its carnivalesque show to Cambodia this week and will be performing in Phnom Penh this weekend, playing a selection of songs with a variety of influences.

“We play jazz, swing, we play music from Eastern Europe, we have a song that is an adaptation of metal,” said trombonist Alexan­dre Leenaerts.

Although the band plays some original songs, it is more likely to bust out a cover of a classic from the likes of the White Stripes or the Mamas & the Papas.

“The most part of our repertoire is adaptations. When we play well, it’s crazy because there’s 11 people and there’s a lot of noise. One song that is really crazy when we play is ‘California Dreaming,’ and ‘Seven Nation Army’ also,” Mr. Leenaerts said.

The group played at Top Ba­nana on Thursday and will perform at the newly opened Cloud bar on Saturday evening. It has also been conducting music workshops with impoverished children and orphans through two local NGOs: Pour Un Sourire d’Enfant and Enfants d’Asie.

Mr. Leenaerts said that although there was only a slim chance that the children would take up the trumpet or tuba, he hoped to ignite their curiosity.

“We’re not here to teach them how to play trumpet, because in two months it’s absolutely impossible…but it’s possible some of them will like music and get the idea to continue and to try and perhaps learn the guitar,” he said.