The Cambodian government’s response to the now worsening COVID-19 crisis had initially been woeful. When the epicenter of the virus was China, its close ally, Phnom Penh dithered. Prime Minister Hun Sen was complacent about the threat, even mocking those who raised the alarm.

Now as the number of infection cases spike in Cambodia, forcing the country to close its borders and restrict movement, the government is getting serious. But months of delay and obscuration mean it is a panicked response which deserves much scrutiny, and a case in point is the indications of a potential bailout which raises more questions than answers.

There’s no telling how much worse the health crisis will get, and how high infection numbers will climb. More tangible, though, is the fate of the economy. The Asian Development Bank forecast in early March that if the outbreak lasts another two months it will cost the economy $283 million in GDP, and if another six months, a $711 million loss. But that was before the European and American shutdowns, a major problem considering those are by far Cambodia’s largest export markets. Moody’s, the U.S.-based ratings agency, has reportedly more recently downgraded its forecast for Cambodian growth this year down to 4.5 percent. If true, except for a blip in 2009 because of the global financial crisis, it will be the worst growth rate in decades. 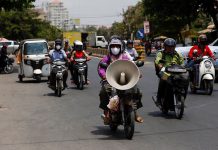 English teacher, 26, who ‘lived life to the fullest’ dies suddenly...

Pictorial flashback: When Vietnam freed Cambodia from a genocidal regime