The Khmer Times, an English-language daily, is not known for criticizing the Cambodian government. Owned by a Malaysian businessman who has been linked to the long-ruling Cambodian People’s Party—and, rumor says, has financial ties to perennial Prime Minister Hun Sen’s children—the publication can be trusted to parrot the party line.

So that raises the question of who was behind its attack March 23, when it ran a scathing critique of the Ministry of Health’s handling of Cambodia’s escalating COVID-19 crisis. It began: “Khmer Times has criticized the Ministry of Health on several occasions and even suggested for the Minister to be replaced in the pending Cabinet Reshuffle.” In a rush to heap scorn upon the health minister, it failed to even name him. He is Mam Bunheng. Remember that name, as he’s about to become the fall guy as the COVID-19 crisis worsens in Cambodia.

Cambodia sits right next to China, and travel between the two is frequent. Until recently, however, COVID-19 cases hadn’t shown up—at least officially. That’s probably a result of a lack of testing. On March 22, there were in the country, a rise of 31 from the previous day. So far, most cases are of foreign tourists, and no one knows quite how high the numbers might spike. What’s certain though, is that Cambodia’s economy will slump this year. Moody’s Investors Service, a subsidiary of the ratings agency, downgraded its gross domestic product growth forecast for Cambodia to 4.5 percent, which, except for a blip in 2009 because of the global financial crisis, would be the worst in two decades. Further downgrades are likely given the global economic situation. 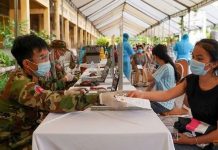