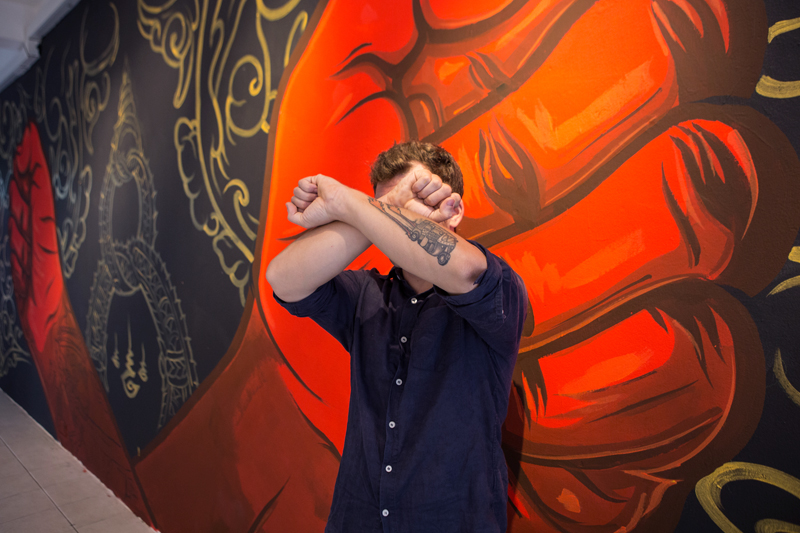 Fourteen street artists from around the world are launching a visual assault on the Institut Francais in Phnom Penh this weekend, and guests will be treated to something of an aesthetic explosion.

“Colors vary according to the vitality of the architectural context, of the street context, of the permanent visual assault that constitutes an Asian city context,” said Chifumi, the artistic director of the second edition of the Cambodia Urban Arts Festival in Phnom Penh.

“We work on the street, and these are works we give to the passerby.”

Along with members of Cambodia’s fledgling street art scene are urban artists from France, England, the U.S., Malaysia and Thailand. With participants used to painting on a massive scale—turning multi-story walls and buildings into their canvas—the Institut invited them to paint scenes that spread the whole length of its gallery’s rooms.

Chifumi’s painting, which fills a whole wall, features a man’s red arms crossed at the wrists with fists clenched, set against a black backdrop covered with gold filigree. Using sharp colors and stark lines, Malaysian artist Syahrulfikri Salleh painted a friendly couple whose gaze meets people as they enter the gallery. French artist Alias 2.0 created a mural in shades of gray that range from nearly white to muted black, spreading the whole length of the gallery’s back wall.

“I mix some of the world’s various calligraphies and forms of writing into an abstract work of geometric shapes,” he said. Alias 2.0 incorporated stylized Arabic as well as Khmer and Western letters into the design. “I more or less turn this into a universal message, a unification of people through a shared form of writing.”

Cece Nobre, who is from the U.S. but lives in the region, painted a giant Hanuman—the mythological monkey leader of Cambodia’s epic tales—on an abstract grid of red and yellow city roads. And French artist Mioshe painted a scene inspired by Cambodian culture and the country’s Buddhist roots.

“There are 12 micro-pagodas somewhat dreamt of, that is, halfway between the existing structures and my own perception of them,” he said.

As part of the festival, free tuk-tuk rides will also be offered by the Institut on Saturday afternoon to tour street art and murals that already exist around downtown Phnom Penh, or people can use the festival’s map to explore on their own.

The Cambodian street artists taking part in the festival took center stage during the opening night on Thursday, with Strange the Rabbit and Mike doing a live painting show. Koy and Davido painted a large scene that, along with works by French artist Theo Vallier, stand at the FCC Mansion and will open to the public on Saturday evening.

Street art has long been associated with activism—with artists like Banksy ranking among the art world’s most celebrated social commentators. In countries such as Brazil, Ecuador and Columbia, street art often carries messages about the plague of corruption and poverty, partly in an attempt to empower people to take action, said Cece Nobre.

But in Asian cities like Bangkok, he said, the artists’ work tends to be less serious. “It’s about trying to do something that they enjoy, something that’s kind of upbeat, playful or a little bit cartoon in style.”

This also is the case in Phnom Penh, where most of the first generation of street artists are still teenagers, said British street artist Venk, who has lived in Cambodia since the mid-2000s.

“It’s a cool thing to do. They’re happy just being cool at the moment,” he said. “For young Khmers who are doing graffiti, it now is very much a fashionable thing. It enables them to make friends and it’s a small community they are developing.”

The movement’s driving force at the moment is the Internet, he added. When City Hall erased a two-story mural of a woman from the side of the White Building in December, it sparked a social media backlash.

The White Building mural was done by U.S.-born artist Miles “El Mac” MacGregor. Foreigners were also behind the idea to cover some of the remaining buildings in Phnom Penh’s Boeng Kak neighborhood with graffiti art.

“Graffiti tourists were the ones who brought this along,” said Mr. Venk, adding that Cambodian artists still had to grow into the form. “They have yet to find a voice.”

The exhibition at the Institut Francais ends on April 23.