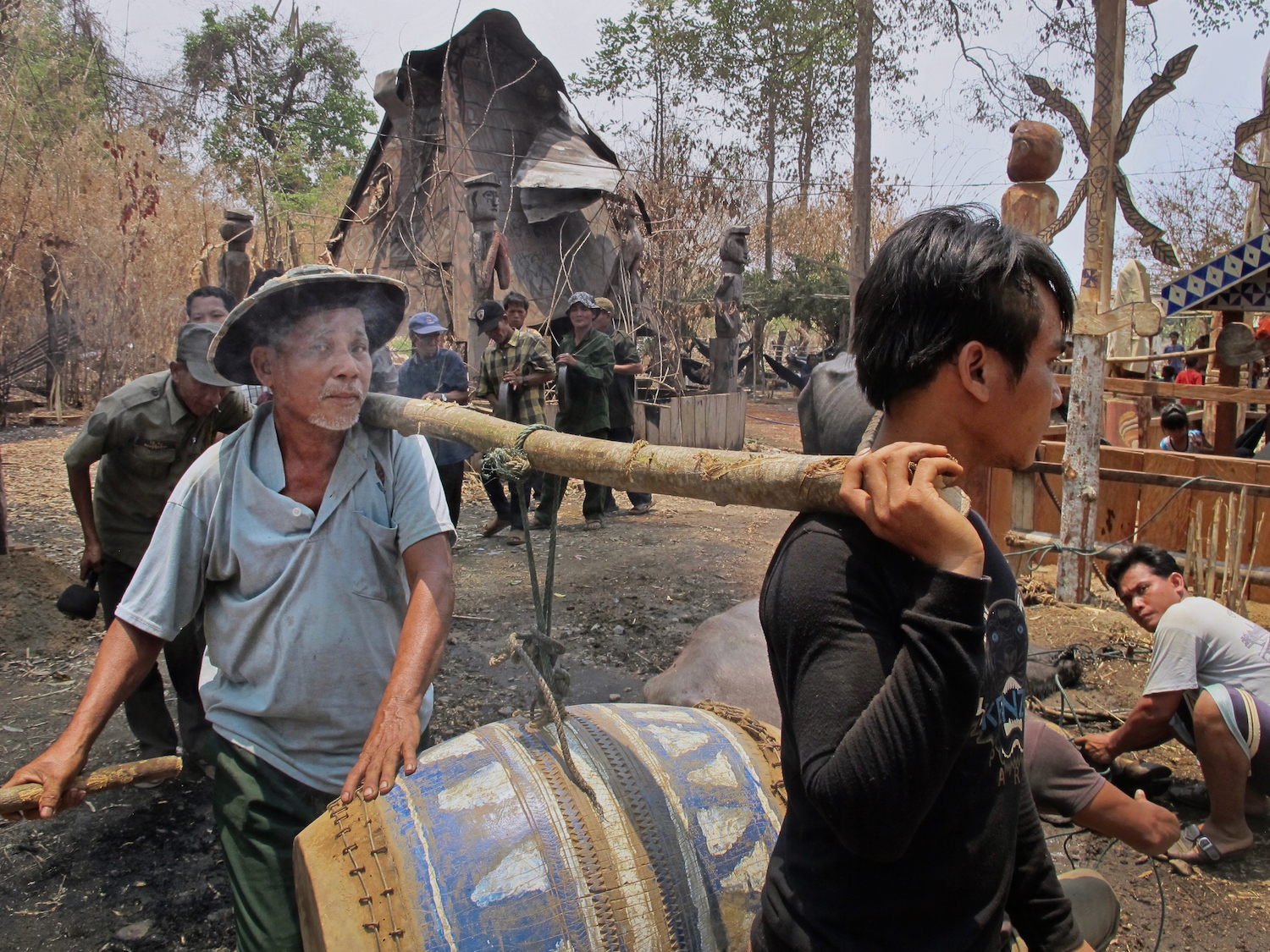 In mid-October last year, 18-year-old Bun Hat rode about 60 km from an isolated village on the Sesan river to Ratanakkiri’s provincial capital, Banlung, to meet a man who planned to lock him up and hide the key.

At that point, Mr. Hat was two years into a drug habit, enticed by friends who bought crystal methamphetamine and “ya ma”—meth cut with caffeine—from itinerant Khmer peddlers who regularly motored through the village hawking household goods and fried bread.

The drugs made him confused and hot-headed, he said. He wanted to quit.

“Some people, they use them and they know how to use them,” he said, looking at his hands as he squatted in the sand beside his motorbike. “But when we don’t have the habit…it’s difficult.”

Waiting for him in Banlung that day was Bunthan Kamphen, a man who lived in the teenager’s village and had persuaded an NGO in the city to set up beds for a dozen young drug-users from Ratanakkiri’s northernmost districts.

He had a plan.

Mr. Kamphen provided the young people with food, coffee, pencils and notebooks. He gave them a few CDs and some instructions on composition. He kept watch on the building to make sure none of them left—to visit friends, or to buy drugs. Then he locked the doors for a week.

Tired and weak from the pain of withdrawal, standing up frequently to spit in the yard, Mr. Hat and those around him began to compose music.

Life can be challenging in Ratanakkiri, especially for the province’s 14 ethnic minority groups, which make up about half the population, according to a 2013 census.

Traditional family structures have crumbled and work has dried up, but addictions remain, and theft often makes up the expensive difference.

Van Songvath, an official in the -provincial police’s planning department, puts the number of drug-users in the province’s indigenous communities at somewhere between 5 and 10 percent of the population. But Mr. Kamphen said the number he encounters is far higher—maybe 6 in every 10 people.

And a rash of teen suicides has burned through outlying villages in the past few years, he said, with some who killed themselves as young as 11 or 12 years old.

There’s no treatment center for drug-users in Ratanakkiri, noted Mr. Kamphen, who has been working for years with youths in the province’s upland villages, sometimes on his own initiative, sometimes as a part of the NGO International Cooperation Committee.

The nearest facility for addicts is in Battambang, about six hours away. And while many young people want to stop their drug habits, few trust the provincial police, he said, as drug crackdowns perennially promise to target kingpins, but end up jailing users and low-level dealers.

Other sources of help—family and community—are eroding, many too threadbare to stave off the new substances tempting the young. Teenagers have stopped listening to their parents, Mr. Kamphen said. They start fights. They beat their relatives.

“When the drugs are in their bodies, they don’t have the heart to think,” he said. “They find problems.”

“When we go into villages, I am afraid that people will hit us, find trouble with us, take our money,” said Mr. Kamphen, an ethnic Brao who was born in Laos and now lives in Banlung.

Mr. Kamphen wanted to connect with these young people. He wanted them to have pride in where they came from—to know they didn’t grow up without an identity to speak of, or write about.

He had the idea of teaching them to compose songs.

“We wanted to give them something they wanted to do, to keep their thoughts from reaching drugs,” he said.

He started with 12 young people who, like him, were ethnic Brao—youths he’d known for years. He told them to write in their own language.

“It is the language of their birth,” Mr. Kamphen said. “If we can’t speak our own language, it’s not good. They will call us a person who has no ideas.”

But they loved European and Khmer melodies, the sounds that now pump from staticky speaker sets at dusty weddings in Veun Sai and Taveng districts, or blare late at night underneath lonely wood houses in the province’s farther reaches.

Mr. Kamphen shrugged. Music is music. “It is a tool to heal the emotions,” he said. He went to work.

Ratanakkiri’s troubles are not just the easy trade of “ya ma” and meth, mostly from Laos. Society has undergone deep change in the two decades since Khmer settlers swept into the province’s far hills in the mid-1990s.

Loggers stripped forests and businessmen set their sights on the country’s rich red earth. Thousands of minority families, unused to money, sold their cashew-farming land and sacred forests only to find that cash doesn’t last and motorbikes rust fast.

Meanwhile, the rubber plantations that shot up by their homes poured pesticides into their water and offered them, in the name of the development, the sort of low-wage jobs many would rather starve than take.

“They want the materials of a middle-class life,” he said. “They want cars, motorbikes, new phones like those worth $200 or $300.”

It was this poverty, said Mr. Kamphen, that led ethnic minorities—whose religion holds holy the spirits of mountains, trees and waters—into logging. So they helped to fell the trees, and they emptied the forests that sheltered the spirits to whom their parents and grandparents had long sacrificed.

But most, he said, believe those spirits are dead now.

The logging—as well as false promises that drugs would whiten skin—sometimes paved the road to addiction, Mr. Kamphen said.

“They have to transport the wood at night, when they’re tired. The people selling drugs tell them, ‘If you use them, you’ll have energy. You won’t be sleepy,’” he said. “And sometimes, it’s the people who buy the wood who give them the drugs.”

There’s not a village in the province that remained untouched. After years of logging, the wood is gone. Left behind are addiction, rotting stumps and rising dust.

There are a lot of people coming to lie to us
They bring drugs, and they are cheating our future
When we listen to them, when we take their medicines
We will be looking for money to buy ya ma.

In Koh Pang, where Mr. Hat is from, there isn’t that much in the way of work now that the wood is gone. Stacks of smaller pieces, yet unsold, rot slowly beneath weathered houses. Men gather in the shade mid-morning to start drinking.

Not all the young people use drugs. But hope here grows patchy and sparse.

Ly Sophan, 19, has no job. She says there’s nothing to do in Koh Pang, now that the logging money is gone. She finished seventh grade some years ago, the highest level offered by the school in Veun Sai, about 25 km away.

She, too, wrote a song as part of Mr. Kamphen’s program. Hesitantly, wearing thick whitening cream and carefully applied lipstick, she sang it for a reporter, tripping over the Brao consonants:

I want to learn, I want to be able
Teacher, write it down for me—
I want to remember it all.

Unlike Mr. Hat, her younger cousin, Ms. Sophan said she never used drugs, though they were available at parties and from other young people. But she saw what it did to people in her village.

“Some grew fat. Others grew very thin and white. Their health wasn’t good,” she said.

Ms. Sophan estimates that 4 in 10 young people in Koh Pang still do drugs, though a piece of meth the size of a thumbnail runs $20. Even those who don’t often drink, she said.

Mr. Kamphen hopes to expand his program—to have another music week with 12 Kreung youths, and another with 12 Tampoun youths, all supported by the ICC.

Meanwhile, to generate excitement, he plans to produce Mr. Hat’s song as a Brao-language karaoke video to be distributed in MP3 form, “to encourage youths, and help them to stop using drugs.”

To make the karaoke, he and his team are planning to carry out a filming expedition to the Veal Thom grasslands, one of the most famous sites in Ratanakkiri’s Virachey National Park.

Meanwhile, Mr. Hat is off drugs, but still cutting down wood. Talking near his house overlooking the river, he was shy and slow to speak.

He hopes to be a songwriter, he said. He plans to make it out of the village—to the provincial capital, maybe. He’s proud of his song that he wrote about drug abuse, and proud that it will be produced by Mr. Kamphen.

He hopes the tune and language will reach people—people like him.

“I want our people to have good ideas, and to be clever,” he said. “I hope they will have better things.”

All of us must flee from drugs
Before the drugs drive our people mad.
Which road will we choose?
We will find a new solution.