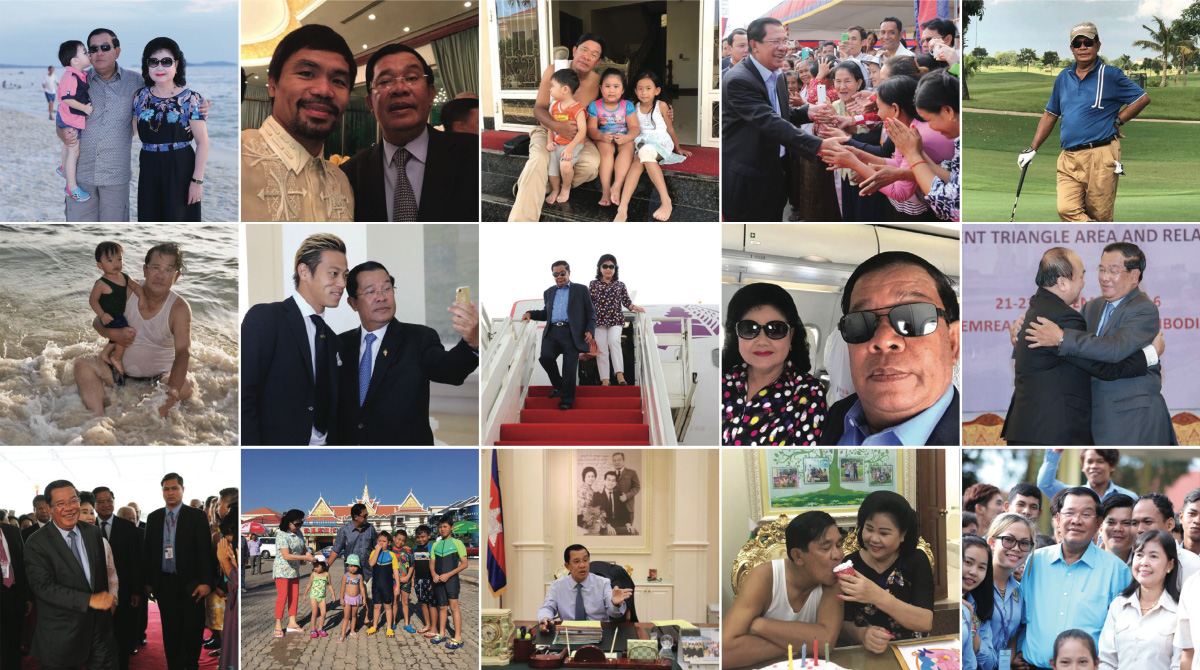 Photographs posted to Prime Minister Hun Sen’s Facebook page over the past year.

Prime Minister Hun Sen began 2016 riding a wave of social media stardom. This was a newer, friendlier iron-fisted leader, an everyman at ease both splashing in the surf of Sihanoukville and grinning through the corridors of the Council of Ministers.

Ministers were instructed to monitor the prime minister’s page. By February, it was the most “liked” in the country, having become a clearinghouse for complainants irritated over everything from potholes to land disputes. Mr. Hun Sen used it to reverse an unpopular motorbike licensing requirement and reinstate a righteous traffic police officer.

Pundits debated the symbolism: Could the CPP harness the platform that had played so heavily against them in the 2013 national elections? Could social media, which last year became Cambodia’s most popular news source, ingratiate an aging party apparatus with swarms of younger, plugged-in voters?

If the beginning of last year proved social media’s potential for the party, the end of the year highlighted its pitfalls. Unflattering leaked chats allegedly originating from Mr. Hun Sen and his son, as well as a video showing a border officer flopping in front of an opposition official’s car and later claiming serious injury, spilled into the public domain, sparking ridicule from Facebook users and relative silence from the ruling party.

“Social Media is a threat to any autocratic government with limited press freedom and transparency because Facebook breaks their news monopoly,” Markus Karbaum, a German political scientist with a focus on Cambodia, said in an email last week. “Facebook’s significance in Cambodia will continue rising as long as the regime panders to one-sided reporting, suppresses political scandals, or vilifies political opponents.”

Council of Ministers spokesman Phay Siphan said Facebook had become an important tool for the government to take the pulse of its citizens and distribute its own message.

“We learn from the people—what they feel, what they need help [with],” he said, adding that the medium came with some uncertainty. “Everyone can use it any time, any place, any purpose.”

With most television and radio sources firmly under the yolk of the party or its friends, opposition leader Sam Rainsy saw early promise in Facebook when he started his page in April 2013.

“It was a unique opportunity and the only way for the CNRP, given its limited means, to develop and reach a vast audience,” Mr. Rainsy said in an email this week.

Mr. Hun Sen, on the other hand, resisted claiming a Facebook page with his name on it until it passed 1 million “likes” in September 2015. The prime minister then took to the platform with gusto, first posting photos and text updates and later adding live streams of football games and hit network TV shows like The Voice Cambodia.

“All levels of the party must follow up, examine and carry out this task as part of a broad, local campaign leading to victory in the elections,” he wrote in a message leaked through Mr. Rainsy’s Facebook page in March. 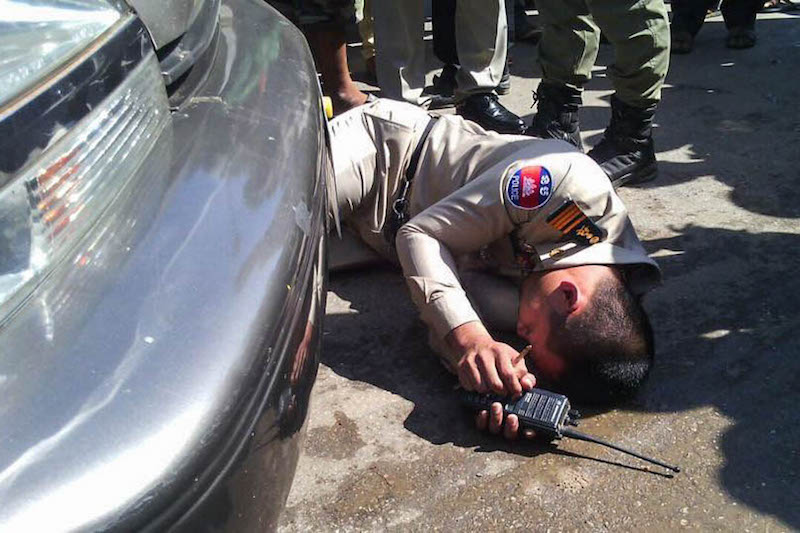 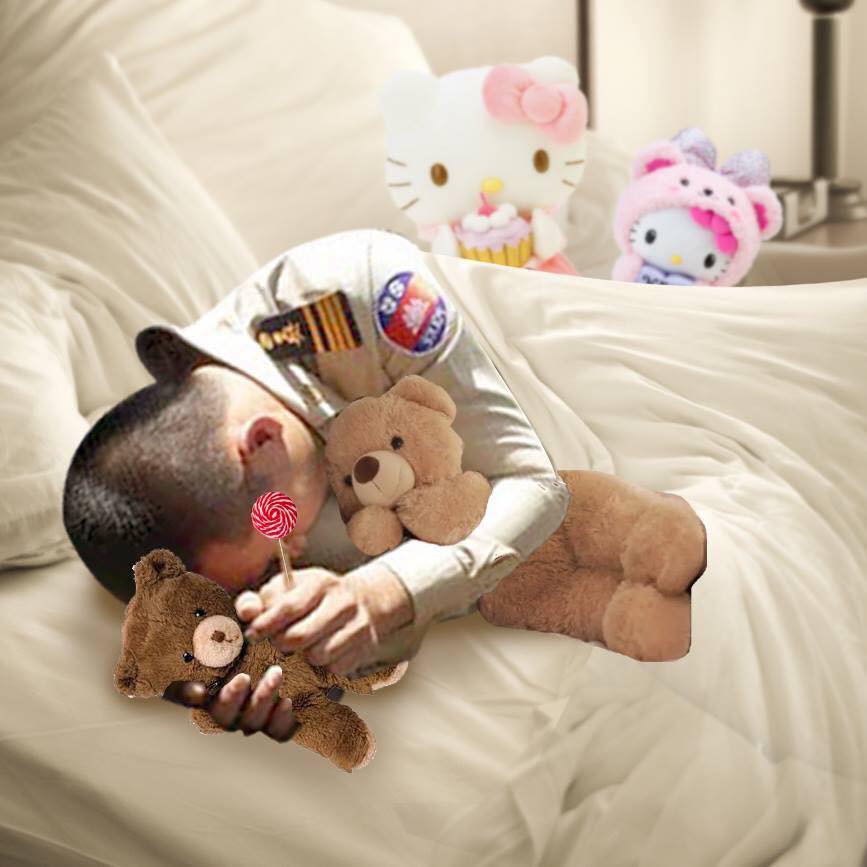 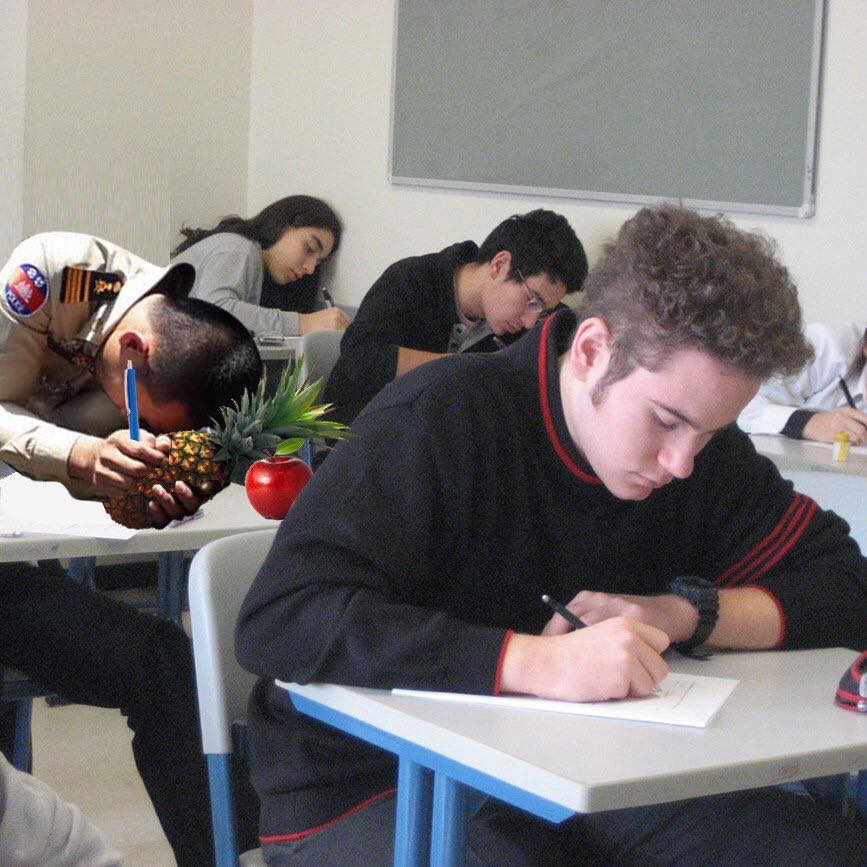 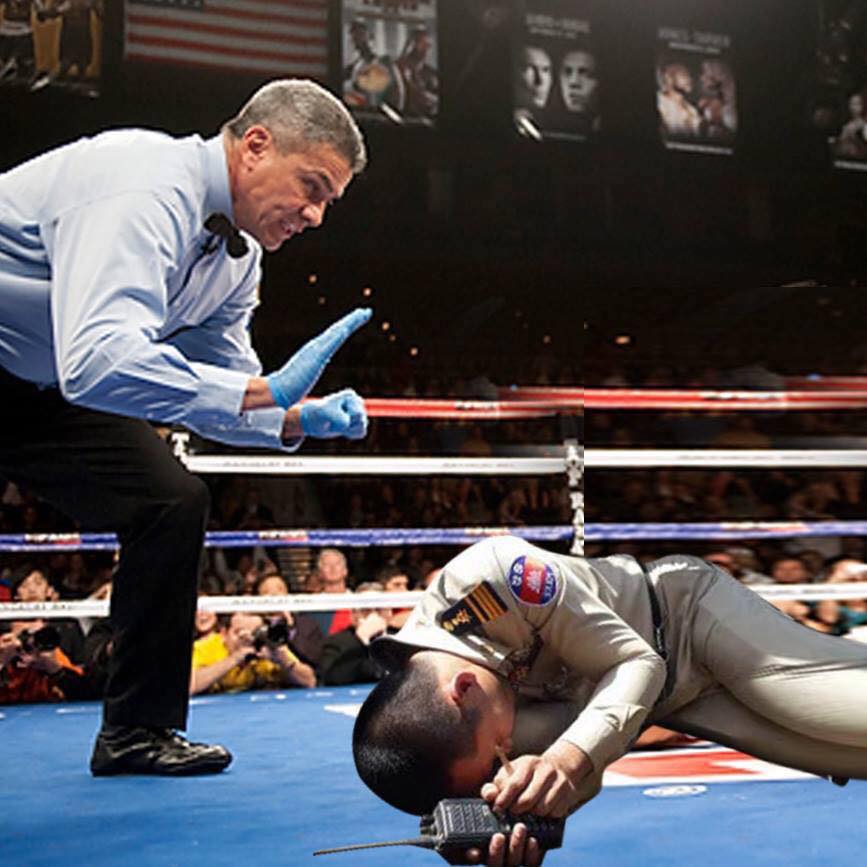 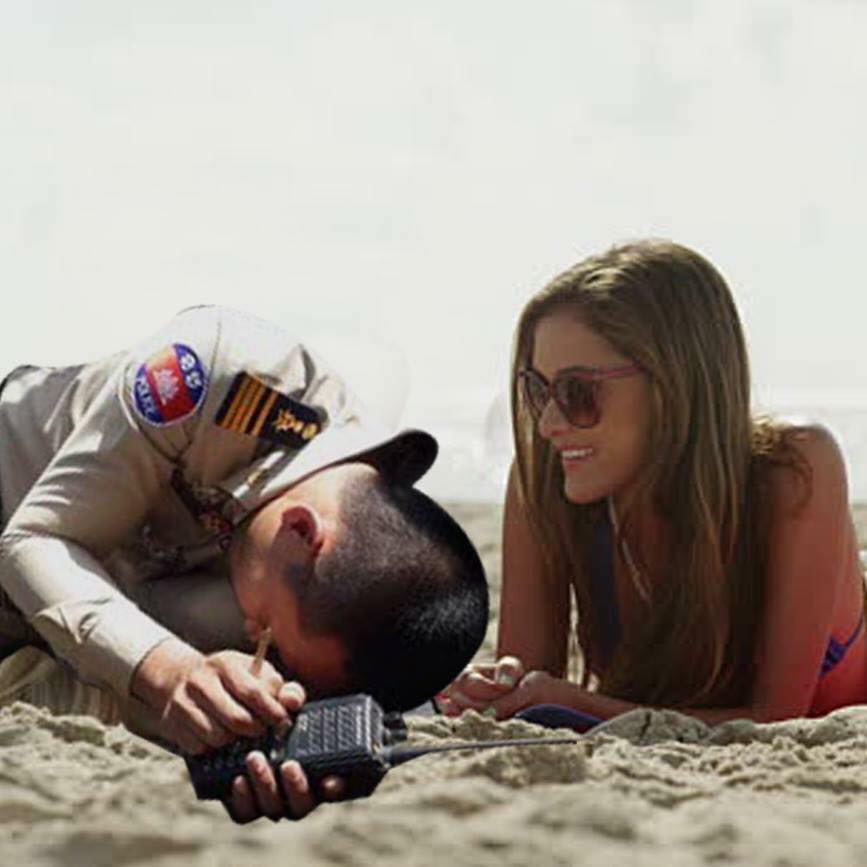 A photograph of Poipet border police official Chhean Pisith after he fell, top, and memes created by Facebook users.

But Cambodian elections will be irrelevant to roughly half of Mr. Hun Sen’s 6.5 million fans. Data from Facebook show they are based outside the country, and Mr. Rainsy and others have claimed that they are in fact fake fans bought through “click farms” in countries like India, where Mr. Hun Sen has proven surprisingly popular.

Mr. Hun Sen’s pride in racking up more likes than his rival (“How many do you actually have?” he taunted in July) and focus on lighter fare comes at the expense of the kind of openness that he could use with the medium, said Noan Sereiboth, a social media observer and political blogger.

“He posts his work, daily activities, selfies and too much entertainment that really does not represent the prime minister’s official page well,” Mr. Sereiboth said in an email. “He just posts to increase ‘likes’ to entertain his supporters and turn people’s attention away from politics.”

Instead, “he should focus more on social and economic issues by providing solutions through his posts” or by hosting live question and answer sessions, Mr. Sereiboth said.

Of course, Facebook is bigger than Mr. Hun Sen. Dozens of other politicians, generals, tycoons and other CPP-aligned officials have also gotten in on the action, even paying to promote their feel-good pages filled with family photos and holiday well-wishes.

Facebook’s bottom-up ethos has also given rise to previously unknown social media stars who use the medium to spread their commentary on news, video and rumors, such as a recently circulated (and false) story of HIV-infected canned food from Thailand.

In a country where the internet and Facebook are nearly synonymous, the platform has “helped extend free speech in Cambodia by allowing people to see and partake in political discourses online,” said Kounila Keo, a media consultant and public policy scholar.

At the same time, “social media allows very raw material that isn’t filtered to spread around,” she wrote in an email. “And what worries me is when some people do not have the knowledge to verify information they find on social media or say, differentiate between ‘merely opinions’ and ‘facts.’”

The rise of average-Joe news sources has also been a mixed blessing for the ruling party.

Some popular Cambodians’ accounts, like that of soldier Khan Chan Sophal, dish out boisterous CPP praise to hundreds of thousands of followers or show gory photos warning of the consequences of an empowered opposition.

And two other mysterious pages, including one called “Truth of the CNRP,” were responsible for audio tapes leaked in February and March that seemed to show deputy opposition leader Kem Sokha in the throes of a romantic affair, opening up a scandal that would consume the rest of Mr. Sokha’s year.

Others have proven less generous to the government.

A user named Chham Chhany has amassed over 250,000 followers by sharing damning—though anonymously sourced and often unverifiable—stories about the government. He was slapped with a defamation suit last January for claiming Mr. Hun Sen’s son Hun Manet had links to illegal timber trading. The user, whose Facebook page says he lives in the U.S., taunted the government in return.

“Ooh, is Interpol hunting [people] down for defamation cases? Do not do such a thing,” he wrote on his page.

Then there was former opposition activist Thy Sovantha, who owes her fame to her early adoption of Facebook as a political tool, and who made headlines in November when her page posted leaked conversations that showed “grandpa”—whom many alleged was Mr. Hun Sen—offering “grandchild” $1 million to stir up agitation against deputy opposition leader Kem Sokha. Another set of leaked chats appeared to also show Ms. Sovantha in discussions with Mr. Hun Sen’s son Hun Manith about the embattled opposition politician.

Ms. Sovantha claims her page was hacked, and neither Mr. Hun Sen nor his son have publicly responded to the alleged leaks.

The government faced a new bout of damage control in the closing weeks of the year, when officials charged a Poipet City opposition leader with hitting a border officer at the nearby checkpoint with his Lexus SUV. Footage of the incident, however, showed an almost stationary SUV and dramatic fall by the officer, sparking public mockery and scorn that went viral on Facebook. In an attempt to quell the uproar, the government issued a formal statement asking the public to be quiet.

The border police themselves responded on Facebook with photographs of the officer supposedly undergoing medical checkups in a neck brace and slumped in a wheelchair. But less than a week later, a Facebook account called “Ton Ton Sen Sen” posted surveillance footage allegedly of the officer happily strolling through the halls of a Thai guesthouse with a female companion.

“The government and parties involved should realize that now everybody has access to their mobile phones at any time and can upload video to share for thousands of people to see,” Ms. Keo, the media consultant, said.

As authorities and pro-CPP social media doubled down on their claims that the officer was injured and the CNRP leader deserved to be arrested, they lost further public credibility, according to Mr. Sereiboth.

“They need to stop posting fake news and biased commentary that makes users not believe them,” the political blogger said. “The CPP needs to have good Facebook team to respond to what Facebook users posts about hot and controversial issues and solve the problem immediately by providing the facts to the public.”

The Council of Ministers’ Mr. Siphan said the government had learned from the Poipet incident. “We learn the feelings of the people. Some of the people are manipulators,” he said. “We know who they are.”

Mr. Karbaum, the German political analyst, said the ruling party’s social media woes were unlikely to disappear. “Ultimately, the government could expand its efforts in criminalizing Facebook users for distributing critical information as it has already done for posts about border issues or that call for a ‘color revolution,’” he said, alluding to instances where the government prosecuted CNRP politicians and government critics over Facebook posts.

“However, such measures will not put an end to whistleblowers as Facebook accounts can be operated anonymously and from abroad,” he added. “It’s like the Hydra: cut off one head and others grow in its place.”