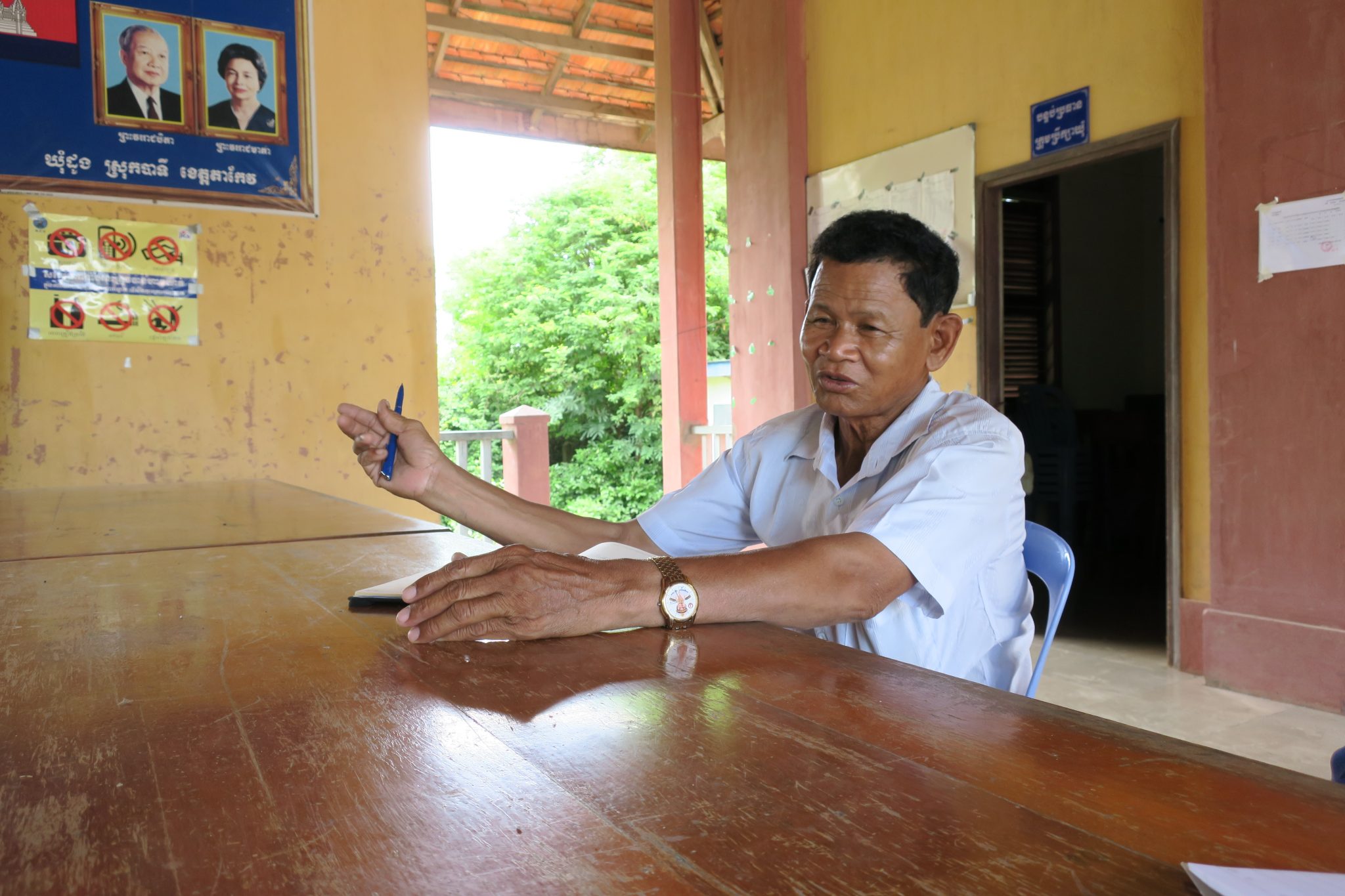 Doung is, in many ways, an unremarkable commune. Roads are unpaved, littered with jagged rocks and potholes. Newly built modern homes are interspersed with traditional wooden Khmer houses, all of them surrounded by rice fields. A handful of vendors have set up shop along the road, many next to a small market.

Nop Touch has been chief of the commune in Takeo province’s Bati district since taking over when the previous chief fell ill in 2009. His deputy is a former candidate for the Human Rights Party (HRP), now running under the CNRP banner.

The June 4 commune election will pit them against each other, with the incumbent and seemingly well-liked CPP commune chief hoping to once again outdo his political rival to hold onto the top job.

But the two candidates share more than political ambition. They have a special bond: they’re brothers.

Nop Touch, the eldest brother, was elected for the first time in 2012 by the slimmest of margins, winning only 48 percent of votes cast, while the candidates for the Sam Rainsy Party (SRP) and HRP captured a combined 46 percent.

His younger brother, Nop Sokheng, was the second-highest vote-earner in 2012, securing almost 30 percent of the vote. That meant he became Doung’s deputy commune chief. The two brothers have run the local commune government together for the past five years, and have, by all accounts, done a fairly good job, according to residents.

Partisan rancor that dominates national politics appears to be largely absent here, but the tightly contested election has exacerbated simmering resentment, straining the siblings’ relationship to the point that they are no longer talking, according to the oldest brother.

“I feel disappointed a little bit in my brother,” says Mr. Touch, who turns 69 on June 2, two days before polling day.

A soft-spoken man, he sits in Doung’s open-air commune hall wearing a white button-up shirt and sporting a watch with a picture of Hun Sen on its face, and talks of his disappointment in a brother he feels has betrayed him. 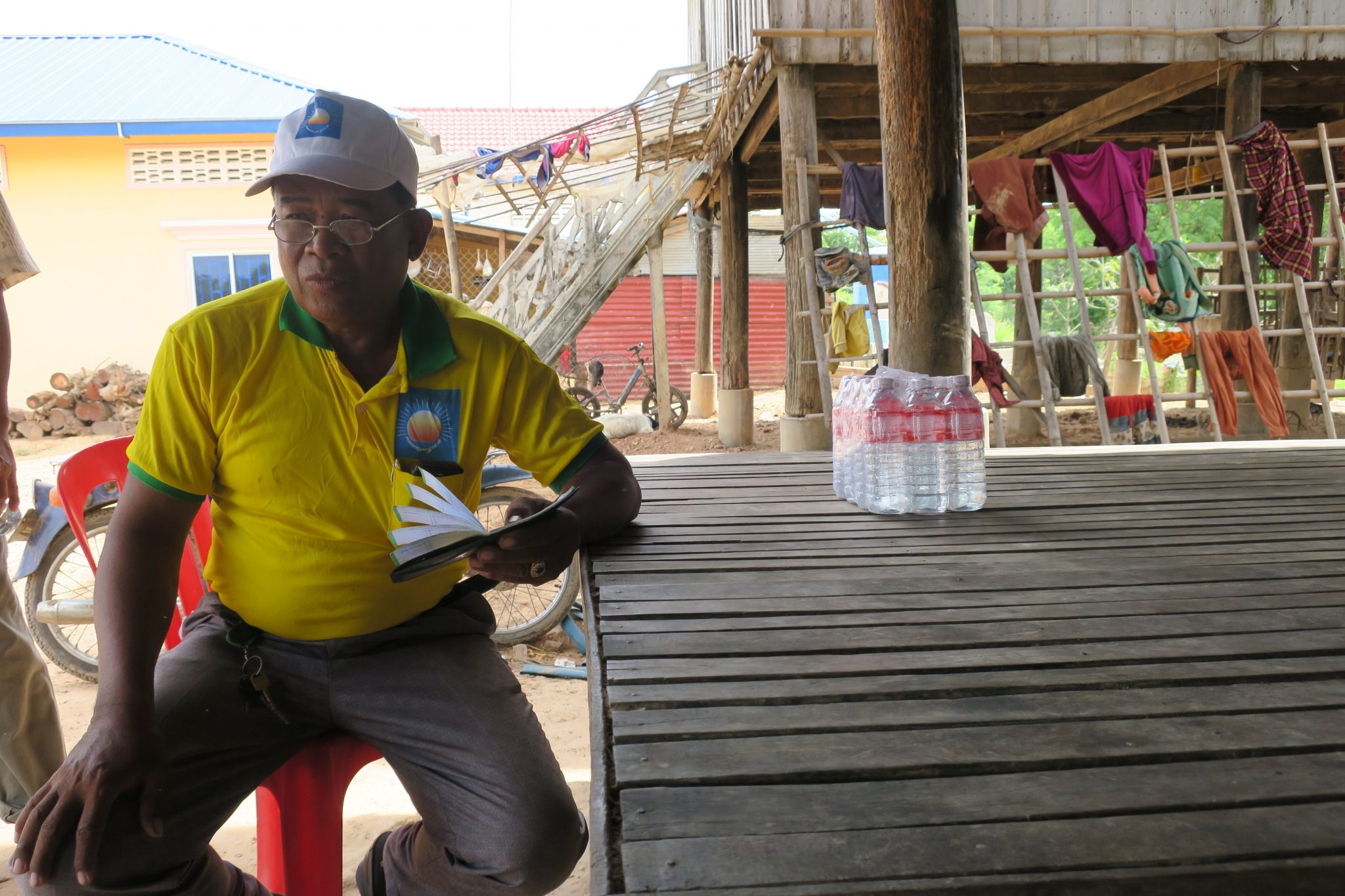 “After our father died I looked after him. I helped him and advised him to understand things,” he says. “But my brother forgets the things I’ve done for him…. Why doesn’t he join with [the CPP]?”

Mr. Touch and Mr. Sokheng were both born in Doung, and both joined the Khmer Rouge in the early 1970s at the urging of then-King Norodom Sihanouk. They fought in different units — Mr. Touch mostly stayed in Doung, while Mr. Sokheng was in a mobile unit — and were only re-united in Doung in 1979, after Vietnam invaded and toppled the Pol Pot regime.

When the Khmer Rouge fell, his brother came “back from the forest,” he says. “We met again.”

Mr. Touch says he helped his brother get on his feet after his return in 1979, finding him a wife and getting him a job. Their younger brother had been killed by the Khmer Rouge and their father died shortly after the Khmer Rouge regime was overthrown.

But around 2002, his brother’s political stances became more radical and openly anti-government, he says.

Mr. Sokheng started to talk of change, and began to praise then-human rights activist and now CNRP President Kem Sokha. That did not sit well with Mr. Touch, who had been involved in local government since becoming a village chief in 1991.

“I tried to advise him, I said: ‘Hey, brother, January 7 is the day that we survived the Khmer Rouge,’ but he didn’t listen to me,” Mr. Touch says. “He wants change. His mind is like Pol Pot’s mind.”

The brothers, both rice farmers, live close to each other, but they no longer talk, Mr. Touch says.

Mr. Touch can at least rely on the support of their eldest brother: he’s also a CPP commune candidate. His sibling adversary, meanwhile, can turn to their cousin, a CNRP supporter.

About a kilometer away, his younger brother relaxes under a wooden house that serves as the town’s opposition staging area, wearing an old HRP shirt now emblazoned with the CNRP’s logo of a rising sun. As a loudspeaker blares opposition political messages, a dozen or so CNRP activists trickle in after a morning of handing out flyers and canvassing residents.

Mr. Sokheng, 60, is larger and more animated than his older brother. He talks of his time as a district chief with the Cambodian Center for Human Rights (CCHR), after it was founded by Kem Sokha in 2002, and remembers meeting the current CNRP president when he came to Bati district for events.

“I joined walks and ate rice with Mr. Kem Sokha,” Mr. Sokheng says. “I know him clearly, like I know the sun.”

Mr. Sokheng has been working on for human rights issues in Doung for 15 years, he says, and in a few weeks he expects to be able to continue his work as the leader of the commune.

“I expect to win the election, 60 percent of votes,” he says. “People believe in us.”

Mr. Sokheng claims things are different now than they were in 2012, when the vote barely tipped in the CPP’s favor. The HRP and SRP are united, he says, and when he goes campaigning from door to door, people are much more receptive to the opposition’s ideas.

Asked about his relationship with his brother, Mr. Sokheng shies away from direct criticism, seeming more hesitant to discuss personal matters than Mr. Touch.

“I really love my brother, and I haven’t had any disputes with him,” Mr. Sokheng says. “But we have different political views.”

Those different views have put the two brothers at loggerheads, but so far the campaign has mainly centered around national party policies.

When asked about his appeal to voters, Mr. Touch parrots the traditional CPP lines about peace and stability, and points to development and infrastructure projects built under his guidance.

“I have achieved many advantages for the community, like building roads, canals and a secondary school,” he says.

He even used the money the CPP national party provided him to campaign — about 15 million riel, or about $3,750 — to fix roads.

When asked if he would be able to step aside and serve as his younger brother’s deputy should the results swing the other way, he simply responds: “We are not going to lose.”

Mr. Sokheng, meanwhile, is confident that he will not be in his older brother’s shadow much longer, saying the opposition’s national policies will swing the vote in his favor.

Reading from a list of the CNRP’s national priorities, he says that he tells voters that if he wins, he will give power to the local communities, strengthen the country’s agriculture sector and provide public services without corruption.

“The important thing is to disseminate information about the national policies,” he says.

Given that both candidates have solid reputations in the commune, voters may end up using those national policies, along with historical loyalties, to decide for whom they will vote.

Nhem Vang, a 61-year-old who has never voted for the ruling party, says he will continue to support the opposition, because, he says, “I think if there is no opposition party, the country can’t find democracy.”

Chhen Norn, 73, also supports the CNRP, due to a visit by former President Sam Rainsy, back when he was the leader of the SRP.

Sam Rainsy “built a small house,” she says, pointing to a tin shack in her front yard. After it fell into disrepair, Mr. Sokheng came and fixed it with his own hands, Ms. Norn says, proving he is “a loyal man.”

Villagers who voted CPP last time round in 2012 know where their vote will go come June 4. Leang Kim Srong, who works at the commune health center and runs a private clinic in town, praises both Mr. Touch and Mr. Sokheng, but says the ruling party had better ideas for the future of Cambodia.

Om Monh, a 63-year-old farmer who lives in a small wooden house, says she thought both brothers were upstanding and had done a good job. She will vote CPP just like she always has. “They do what they say. Other parties make promises…but I never see it happen.”

The result in Doung could serve as a referendum on national policies, largely unaffected by the personalities of the local candidates. Given the closeness of the race in 2012, it could be an important bellwether for next year’s national elections.

But for the brothers, and particularly Mr. Touch, the race remains a personal one.

“We are the same blood,” Mr. Touch says, lamenting the situation he and his sibling find themselves in now. “It would be better to be opposed by a stranger.”