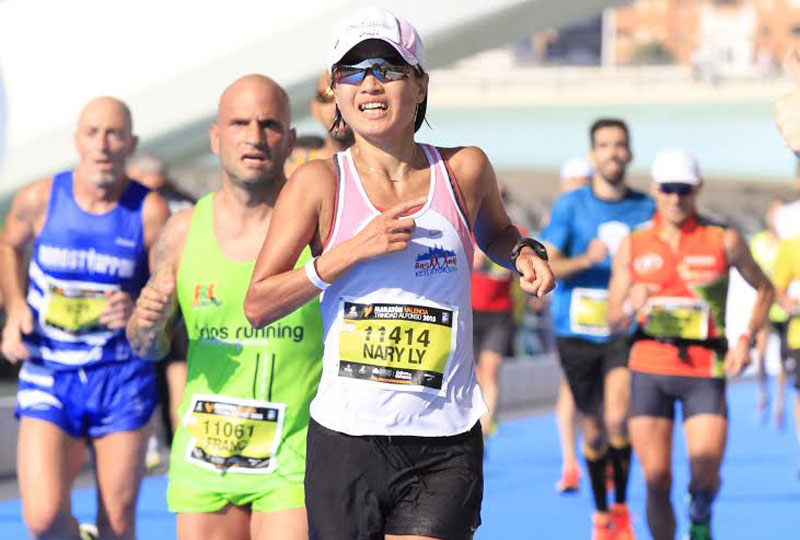 It wasn’t until Nary Ly crossed the finish line of the New York City Marathon in 2009 that she began chasing her dream of competing in the Olympics.

Finishing her first full marathon in 3 hours and 34 minutes, she recalled during an interview last month, “I thought maybe I could represent my country one day.”

Six years later, Ms. Ly has dropped her time by an impressive 35 minutes, and on November 15, the 43-year-old French-Cambodian medical researcher broke the 3-hour mark, finishing the Valencia Marathon in Spain in 2 hours, 59 minutes and 12 seconds.

“These were the most scary seconds ever,” Ms. Ly said of her sprint down the final stretch toward the towering illuminated clock. “My eyes were fixed on the finish-time clock and my legs were racing against the last seconds to be under 3 hours.”

Though Ms. Ly grew up in France after becoming separated from her family during the Khmer Rouge era, her running career began in 2006 while she was working as an assistant HIV/AIDS researcher at the Pasteur Institute in Phnom Penh, in pursuit of a Ph.D. from Bordeaux University.

That year, she finished the Angkor Wat International Half Marathon in Siem Reap City in 1 hour and 54 minutes, knowing she had just fallen in love with the sport.
“You surprise yourself. You discover yourself and how much the body can give you,” she said.

Shortly after finishing the Angkor Wat half-marathon, Ms. Ly headed to New York to complete her post-doctorate at the Mount Sinai School of Medicine. She started out jogging in Central Park and later joined running clubs, determined to improve her times.

Knowing it would be nearly impossible to dedicate herself to training while simultaneously pursuing a medical career, Ms. Ly took a sabbatical in 2010 and traveled to Kenya to train for three months with some of the world’s top endurance athletes at the High Altitude Training Center.

“Some people said I’m crazy. They say I have a good position, a good salary…. They don’t understand. Few people understand. But it’s good to take the risk,” she said.

Encouraged by the rapid improvements, Ms. Ly took a break from her job as a medical researcher with the U.S. Navy in 2012 and returned to Kenya. She has since raced in various long-distance events around the world in preparation for this year’s Valencia Marathon.

Although her finishing time in Spain didn’t automatically qualify her for the 2016 Olympics in Rio de Janeiro—the qualifying time is 2 hours and 43 minutes—there is still hope. The Khmer Amateur Athletic Federation (KAAF) can recommend her as a wild-card candidate to the National Olympic Committee of Cambodia (NOCC).

If she is selected to represent Cambodia in Rio, Ms. Ly will be only the eighth Cambodian woman to compete at the Olympics since 1956, and the first female marathoner, with other women having competed in swimming and track-and-field sprinting events.

Vuthy Pen, secretary-general of the KAAF, said Ms. Ly had a good chance of being put forward as a wild-card selection.

“I think so, because [among] the ladies in Cambodia so far, we don’t see anyone better than her,” he said.

Ken Gadaffi, an adviser to the NOCC, said final decisions about who would carry the Cambodian flag to Brazil next year would not be made until April, when the window for official qualifying closes.

“As for Nary, we were delighted to see that she ran the Valencia Marathon and broke the mythical sub-3-hours record, which could have earned her a gold medal in the last SEA Games,” Mr. Gadaffi said of the biennial regional competition.

Ms. Ly is understandably anxious to find out if she will be making the trip to Rio.

“I want to know as soon as possible if I am going to represent Cambodia,” she said, adding that the NOCC interviewed her about the possibility last month. “It will consume my life, so I need time to make my schedule and train.”

In addition to keeping to a strict workout schedule, Ms. Ly—who now works on and off for the University of Health and Sciences in Phnom Penh—said she would return to Kenya to train if she got the nod.

And while she  doesn’t expect to keep up with the world’s top runners—her personal best is about 43 minutes slower than the world record of 2 hours, 15 minutes and 25 seconds, set by the U.K.’s Paula Radcliffe in 2003—she said it would be an honor to participate.

“I would love to go. Of course I will not win any medal, but I want to start and finish and do well,” she said. “If you don’t have any challenge, life is boring.”