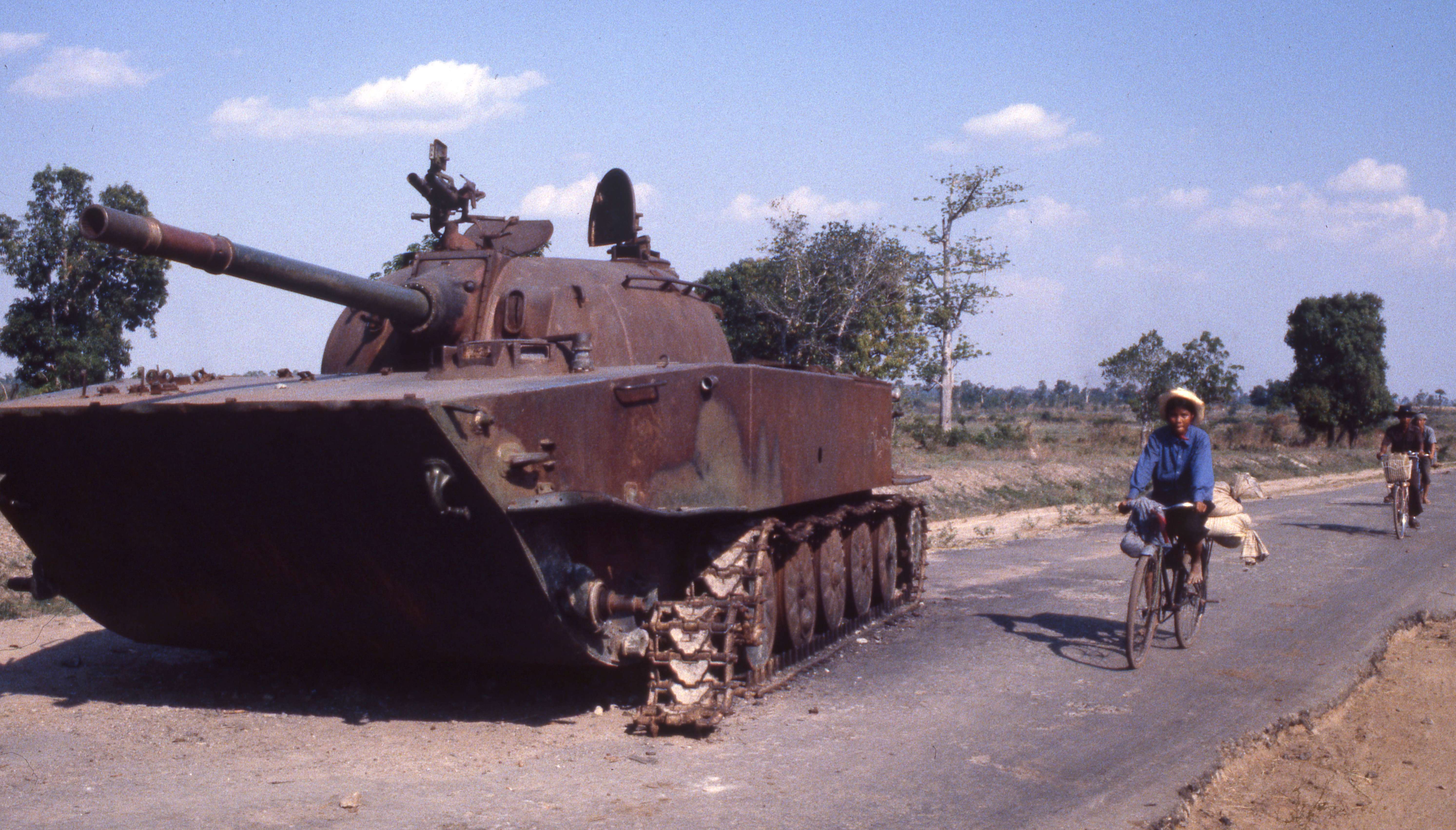 People ride along a disabled Vietnamese tank on a road between Battambang City and Phnom Penh in April 1980. (John Burgess)

In March 1980, American journalist John Burgess was thrilled to learn that the Cambodian government had approved his request to visit a country cut off from the rest of the world, but beginning a long recovery.

Writing for The Washington Post and Time magazine, he had arrived in Bangkok in 1979 to cover the refugee exodus into Thailand, and also wanted to see what was happening inside Cambodia.

“The Khmer Rouge had been overthrown in January 1979 and there was a huge, huge influx of people from Cambodia literally just walking into Thailand, seeking food, medicine, security, passage to third countries—it was a colossal humanitarian crisis,” he said.

After receiving authorization, Mr. Burgess “arrived on a C-130 aid flight run, I think, by ICRC [International Committee of the Red Cross]—there was no commercial flight into Phnom Penh at that time,” he said.

He spent a week in Phnom Penh, and a week visiting Siem Reap City, Battambang City and Sihanoukville, escorted by a Cambodian Foreign Ministry employee and driver in a brand-new Russian Lada. The photos he took during that journey will be exhibited at Meta House on Tuesday.

At the time, Cambodians, who had yet to recover from slaughter and enslavement at the hands of the Khmer Rouge, were embroiled in Cold War politics and would remain so for another 11 years.

After the Vietnamese army, along with a unit of Cambodian rebels, had rid the country of the Khmer Rouge in January 1979, Cambodia was under an international embargo. With support from China, the U.S. and other Western countries, the Khmer Rouge had rearmed and were still occupying Cambodia’s seat at the U.N. The group was viewed internationally as the country’s legitimate government.

The tens of thousands who had fled to the Cambodian-Thai border after the fall of Pol Pot’s rule in 1979 would spend a decade fleeing from one refugee camp to the other as the frontline shifted amid fighting between the Khmer Rouge and other resistance groups on one side and the Phnom Penh government and Vietnamese army on the other.

In the meantime, those in the country tried to rebuild their lives under the watchful eye of the Vietnamese. “In Phnom Penh, there was almost no running water anywhere in the city. There was no electricity,” Mr. Burgess recalled. “There were no banks. There were a few schools getting started, a few [health] clinics and government ministries were sort of functioning. But basically, if you lived in Phnom Penh, you were on your own.”

The Cambodia that Mr. Burgess photographed in 1980 would take a long time to change.

Due to the U.N. embargo, only humanitarian aid was allowed into the country. So, along with countries from the Soviet Bloc, which sent advisers, goods and equipment, it was left to international aid organizations and religious groups with humanitarian programs to help the people who remained in Cambodia.

Bill Herod and Margaret Bywater were among the foreigners who came to help, and they are among the very few aid workers of that era who still live in Cambodia. 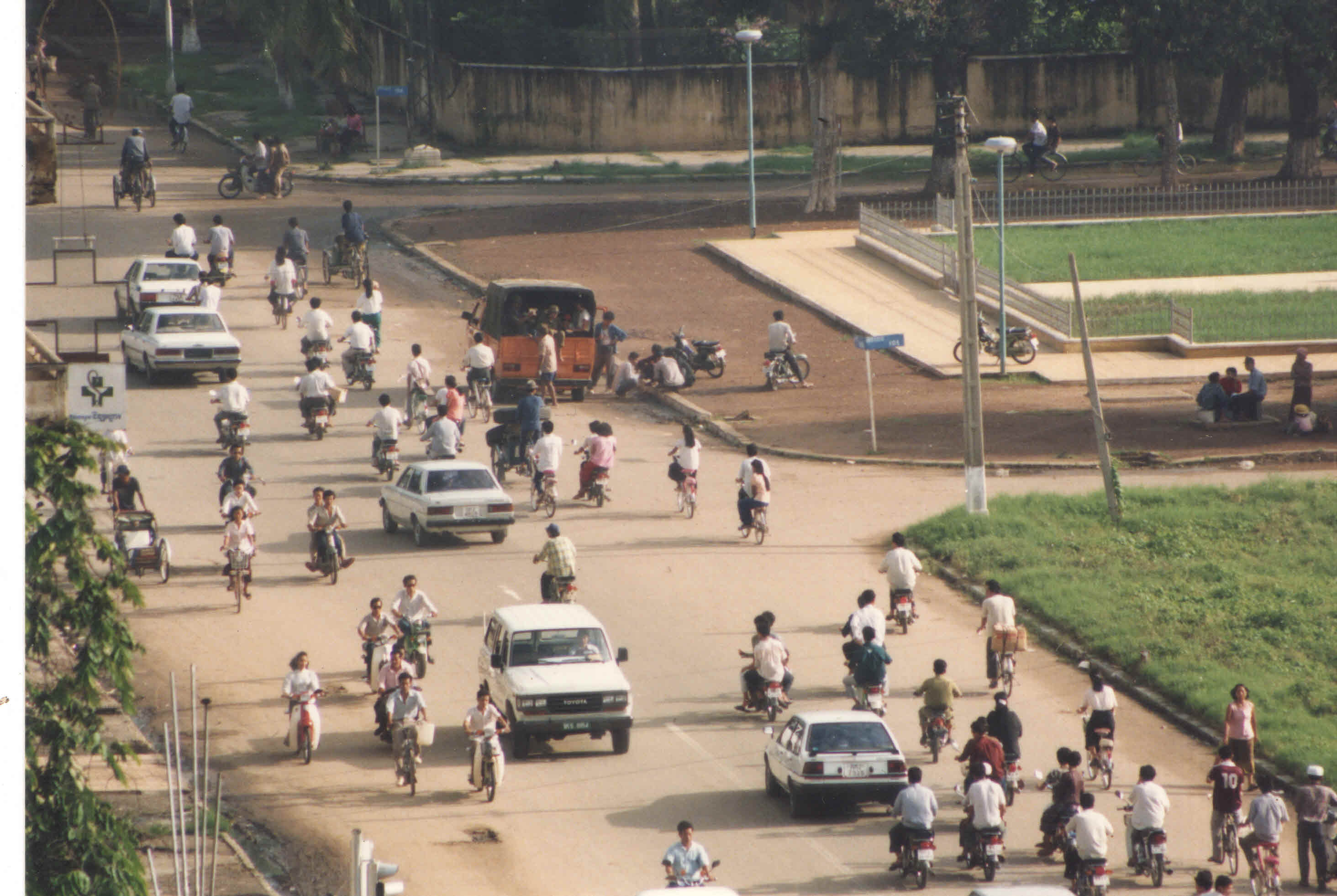 Traffic on Monivong Boulevard in the late 1980s still consisted mainly of bicycles, cyclos and some motorcycles along with a few cars. (Bill Herod)

“In the early 1980s, it was a country in shock,” Mr. Herod said. “We had the feeling…that we were going into a movie set where the extras were standing around, waiting to be told what to do. There was nothing happening. I mean, there was no electricity, no traffic, no running water. Downtown in what are now the nice boutiques and shops on Monivong [Boulevard], people were sitting on the floor in the middle of those buildings with wood fires cooking rice, sleeping in hammocks. You could walk down the middle of Monivong without any traffic disturbing you at all.”

Mr. Herod, an American, came twice a year throughout the decade as a representative for Church World Service and later the Washington-based NGO Indochina Project to oversee agricultural and other programs. The editor of the weekly publication “Indochina Digest,” aimed at journalists, academics and foreign government officials, he also served as liaison for visiting journalists and at times as a go-between for U.S. officials who wanted to contact the country’s government, but could not do so officially.

Ms. Bywater first settled here in 1987 for a three-month project with Quaker Service Australia. A librarian by profession, she was assigned to set up a library as part of an English-language program at what is now the Royal University of Phnom Penh.

On her first visit to the country in July 1986, Ms. Bywater had experienced the precarious nature of life in the country. On her return from visiting a Quaker project in Kompong Cham province, she and her colleagues met a broken-down ferry at Prek Kdam—there was no bridge at the time. Since they had to return to Phnom Penh before the 9:00 p.m. curfew set by the government, they hired a motorcycle with a makeshift trailer and, with some Cambodians climbing in for the ride, got on their way. Apart from the curfew, they did not want to be on the road after dark as Khmer Rouge soldiers often came down from the mountains and attacked people on that road. It was a reminder that the country was still at war.

In those days, prior to the internet and smartphones, staying in touch was no simple matter. During her first months in Cambodia in 1987, Ms. Bywater recalls going to the main Post Office in Phnom Penh to phone her son on his birthday. It took about 30 minutes for the call to be routed through Moscow to Hobart, Australia. Once the connection was made, she was directed to a phone booth buzzing with mosquitoes where she was able to speak, she said, “on a fairly crackling line.”

One aspect of Phnom Penh had truly taken Mr. Burgess by surprise in 1980. “I wasn’t prepared for the hive of activity Phnom Penh was. I sort of imagined it to still be half deserted, you know, looking almost like Pol Pot days. But the streets were alive, there were these very vibrant and raucous markets…horse carts for hire, bicycles.

“Currencies in use were U.S. dollars, Vietnamese dong and Thai baht, although gold and rice also served to trade,” he said. “It was a fantastic sort of economic showcase for what happens when a system totally breaks down and how people spontaneously put it back together.”

Still, whether visitors or aid workers, foreigners had to abide by the rules. “All foreigners were staying and eating at what was then the Monorom Hotel [on Monivong Boulevard near Phsar Thmei] or at the Samaki Hotel, now the Raffles [Hotel le Royal], or embassies of course,” Mr. Herod said. “In the early ‘80s, we foreigners were not permitted to interact privately with any Khmer. We weren’t allowed to study Khmer language—by we, I’m talking about all foreigners who were here other than with Eastern European embassies and the Cuban Embassy.” 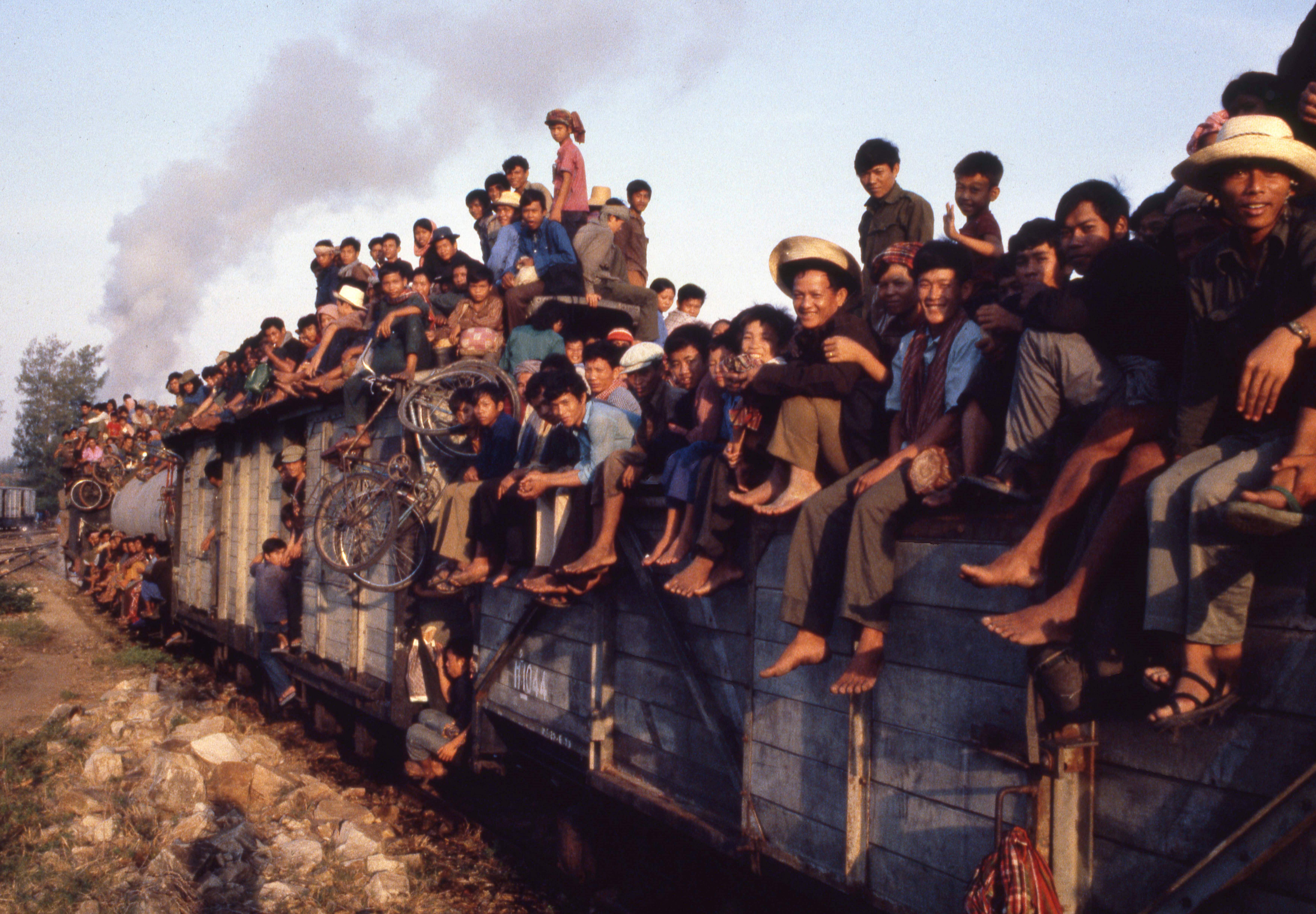 “Our interpreters, secretaries, office staff, drivers, maids, were all assigned by the Foreign Ministry. Of course, we did have private conversations, and we did study Khmer, but it wasn’t permitted. It wasn’t really enforced, nobody ever stopped us,” he said.

Regulations progressively eased up, Mr. Herod said. By 1982, there were two cyclos stationed in front of the hotels, and he still remembers how excited he was the first time he rode in one of them in Phnom Penh. He also recalls the opening of the White Restaurant, in which foreigners were allowed to eat.

“It was fun because the Russian KGB and the Cuban Embassy people and American Friends Service Committee and Church World Service, all of us would be eating at the same place, sending drinks to each other,” he said.

As to whether Vietnamese officials issued orders to Cambodians, Mr. Herod said he was not in a position to know. However, he recalls a Cambodian official he used to meet on each of his visits, except one time when he was told the official had been sent to Vietnam “for education.” He returned haggard and weary, Mr. Herod noted. “He survived it and continued to thrive, and was elevated to higher and higher positions.”

In 1989, as the Soviet bloc was dissolving and the Cold War fading away, Vietnam’s military forces officially left the country. This would eventually lead to the Paris Peace Agreements in 1991, with the U.N. charged to oversee the country’s national elections in 1993—the results of which it failed to uphold by allowing a deal that let the CPP effectively remain in power despite losing the election.

Following his 1980 visit, Mr. Burgess wrote a series of articles on Cambodia. Since retiring from the Post, the 65-year-old has published several books featuring Cambodia, including one on the Preah Vihear temple and a book of fiction set in Angkor in the 12th century.

Over the years, Ms. Bywater has, through international support, helped train librarians and set up numerous libraries at public and research institutions such as the Royal University of Phnom Penh, the National Museum and the Cambodia Development Resource Institute. And at 74, she is continuing her work.

As for Mr. Herod, he has run several NGO programs, including a project of the Canadian government’s International Development Research Center in the mid-1990s to set up the internet in the country. Now 71 years old and “actively retired,” he occasionally works on minority rights in Mondolkiri province, and helps Cambodian-American deportees make a life for themselves in Cambodia.